You are here: Home / Activism and Campaigning / Tanni tells BBC’s DDA event: ‘I’m over being patient on disability rights’ 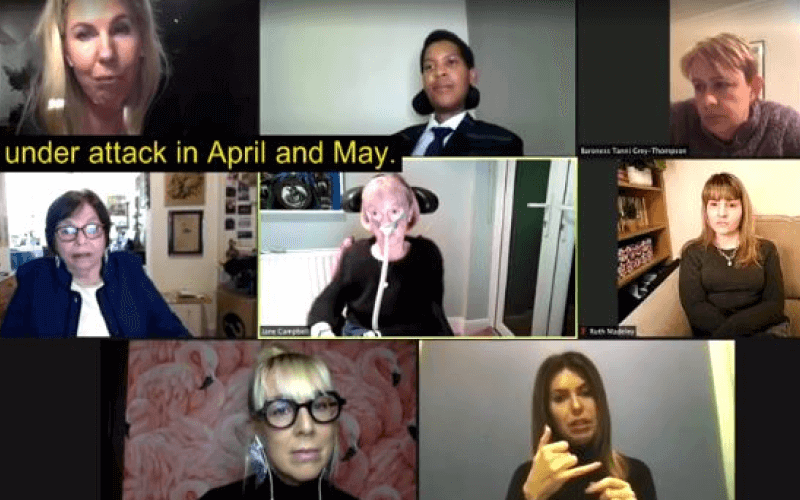 A disabled peer and retired Paralympian has warned that she has lost patience with progress on disability rights, and will scream in the face of the next person who tells her London 2012 changed the world for disabled people.

Baroness [Tanni] Grey-Thompson (pictured, top right) told a BBC discussion event, held to mark the 25th anniversary of the introduction of the Disability Discrimination Act (DDA), that it was right to celebrate the DDA, which was “amazing” and “a moment in time”.

But she said she turned 50 last year and was now “slightly over being patient”.

She told the online Reframing Disability event that that was partly because of the failure to ensure that all trains would be accessible by 1 January 2020, as the DDA had promised.

She revealed that a key moment for her came when she attended a meeting in January at which a representative of the public transport regulator, the Office of Rail and Road, told her: “You just need to be a bit more patient”.

She said: “The next person who tells me that [London] 2012 and the Paralympics changed the world for disabled people, I’m just going to scream in their face.”

She added: “My frustration for where we are now is that being a Paralympian is pretty much the only route through that [disabled] people are given as a career option.”

Her fellow disabled crossbench peer, Baroness [Jane] Campbell (pictured, centre), said the DDA was a “watershed moment for disabled people like me”.

She said: “Before 1995, I remember the time when I was turned away from pubs, clubs, restaurants, in fact any public venue, on the grounds that I was in a wheelchair.

“We were living in what we called a physical apartheid. This made us feel totally like second-class citizens.

“After the DDA, people like me felt personally liberated because the state had finally recognised that we were systematically discriminated against by society.

“We knew that things wouldn’t change overnight, we knew it would take decades.”

And she said that, although it does not always “work smoothly”, she knows “the law is behind me”.

She added: “The Pandora’s Box is open, you will never be able to put us back in the box.

“That is what disability rights legislation gave us. It has liberated us as human beings.”

But she also revealed that she had been talking to Baroness Grey-Thompson in a House of Lords corridor last year when a male peer came up to the two wheelchair-users and said: “Oh, are you having a little race?”

When they told him they were just talking, he said, “Oh, that’s really nice,” and patted Baroness Campbell on the head.

She said: “I had not been patted on the head for probably 20 years. For once in both our lives we couldn’t speak, we were absolutely speechless.

“So, as a disabled woman, in a leadership position, in the House of Lords, I can tell you, Tanni and I, we come across attitudinal discrimination once a week… or once a month at least.”

Disabled journalist, actor and presenter Adam Pearson expressed his frustration about the way that disabled people are still being represented by the media.

He told the event: “Accurate representation stems from giving disabled people the power and the autonomy to tell their own stories, and at the moment systematically that isn’t happening.

“It is a lot of non-disabled people making decisions about disability and speaking for a community… and that’s when those horrible mistakes happen.”

He pointed to the previous week’s BBC Children in Need telethon.

He said: “I was chewing my arm off last Friday as they showed slow motion videos of disabled children with Coldplay’s Fix You in the background.

“I was asking myself, ‘Has anyone actually read the lyrics to Coldplay’s Fix You?’

“When you try your best and you don’t succeed… tears stream down your face… I will try to fix you.”

He said the imagery was “really damaging, almost archaic”.

He said he believed that this kind of representation was still happening because there were “no disabled people with positions of influence” at executive level.

He said: “People can consult with the disabled community all they want, but unless they listen to them and action it and take what they say seriously, we are forever going to be in a cycle where there is bad representation.”

TV presenter and campaigner Katie Piper highlighted the problems created by social media’s “obsession with perfection” that was in reality “unobtainable”.

She also pointed to the new film remake of The Witches, which sparked widespread anger and frustration among disabled people by, she said, giving the “angry”, “frightening” and “untrustworthy” witches no hair and no fingers, like many burn survivors.

She said: “While films like that are still coming out in 2020, we are socially conditioned not to trust those with burns and scars.”

The leading US disability rights activist Judy Heumann (pictured, left centre), a former special advisor on disability rights to President Obama’s State Department between 2010 and 2017, said it was crucial to have disabled people in that kind of senior position.

She said that what was most important was to work with non-disabled staff to ensure they understood it was also their responsibility to ensure that disability was being “integrated”.

She said her role had also ensured that disabled people in the countries she travelled to were meeting US ambassadors and senior embassy staff to give them “a clear understanding of not only the discrimination that disabled people were facing but what role we could play as a US government in highlighting these issues”.