You are here: Home / Employment / Tens of thousands of disabled workers ‘let down by equality law enforcement failure’ 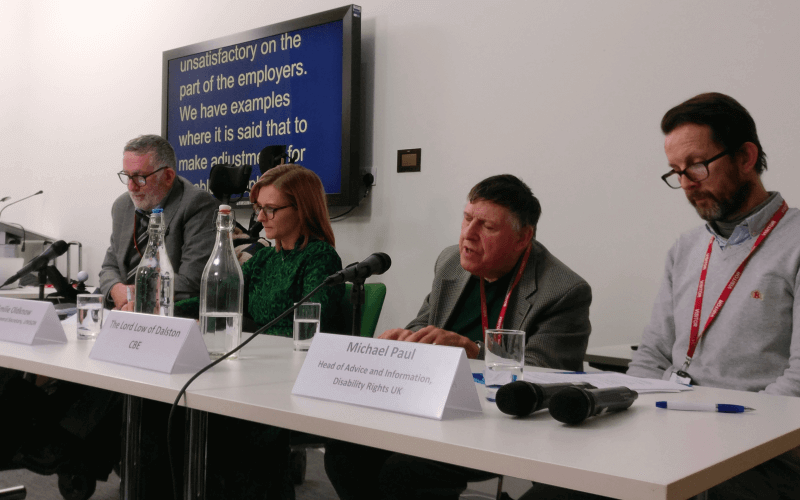 Tens of thousands of disabled workers are being let down by the government’s failure to ensure equality laws are enforced in the workplace, according to a new report.

The Let’s be Reasonable report by UNISON, based on nearly 2,900 survey responses completed by disabled workers, was launched this week at the union’s headquarters in central London.

The survey found that two-thirds (67 per cent) of disabled workers across the UK who had asked their employer to make reasonable adjustments for them in the workplace had had all or some of their requests rejected.

UNISON said the survey showed that disabled workers were being turned down for reasonable adjustments in large numbers and were experiencing “unnecessary physical pain, mental health problems and job loss as a result”.

The survey found nearly a quarter (23 per cent) of those who required adjustments – such as adapted chairs, flexible hours, being able to work from home, or funding for a personal assistant – had been forced to wait a year or more to receive them.

And only eight per cent of those who needed reasonable adjustments had been allowed disability leave (time off from work for impairment-related reasons), an adjustment the union said was “virtually unknown in the workplace”.

In all, the survey found that more than a third (34 per cent) of those who told their employer they were disabled said that that employer had not been supportive.

The survey also revealed that nearly a third of respondents (31 per cent) had been unfairly treated because of their disability-related sickness record, and 28 per cent of this group had been subject to a disciplinary process.

Nearly a third of those surveyed (32 per cent) said they did not have equal access to promotion.

As many as 200,000 of the union’s members are believed to be disabled, with many working for local authorities, the NHS, police forces, schools and the voluntary sector.

UNISON is now calling for better enforcement of the right to reasonable adjustments in the workplace under the Equality Act, which it suggested could be done through a new standalone enforcement body.

It also wants to see a “much stronger” right to disability leave through the Equality Act, as well as statutory timescales for responding to requests for reasonable adjustments and for implementing those that have been agreed.

Of those respondents to the survey who had reasonable adjustments agreed by their employer, nearly a quarter (23 per cent) had to wait more than a year for them to be implemented.

One disabled worker who had not yet received the reasonable adjustments they needed says in the report: “They’re always looking into it. I feel like they are trying to make it uncomfortable for me in the hope I will quit.”

Another was told they “cannot work from home as no-one else in the department can”.

One disabled worker who had not had the reasonable adjustments they needed says: “My physical health and disability has plunged to its lowest level ever.

“Mental stress, palpitations and anger that they are rated ‘Disability Confident’.”

One UNISON member says: “I feel I am in a constant battle to remain in work… emotionally I’m at the point where I’m beginning to think about giving my job up because fighting my condition is tiring enough.”

UNISON also calls in its report for there to be a clear statement that disability leave is a legal right if a disabled worker is waiting for reasonable adjustments to be implemented.

Lord Low (pictured, second right right), the disabled crossbench peer, told the launch event that it was an “extremely welcome” report and that it was “dreadful” that two-thirds of workers had some or all their requests for reasonable adjustments refused.

He also welcomed the report’s emphasis on disability leave and said: “I don’t think enough attention has been paid to it as an adjustment.

“We need better enforcement of the right to reasonable adjustments. The suggestion of a standalone enforcement body or organisation is well worth considering.”

Emilie Oldknow (pictured, second from left), UNISON’s assistant general secretary, said: “We know that not only do employers need a carrot, but they also need a stick.”

Describing one disabled member who was not provided with the reasonable adjustments they needed and had to quit their job, Oldknow said: “Wasted opportunity, wasted talent, wasted lives.”

Michael Paul (pictured, right), head of advice and information for Disability Rights UK, said: “My call to action would be for every small, medium or large organisation to be empowered… to hold the difficult conversations with disabled staff and embrace difference.”

He said that reasonable adjustments “don’t have to be complicated or expensive”.