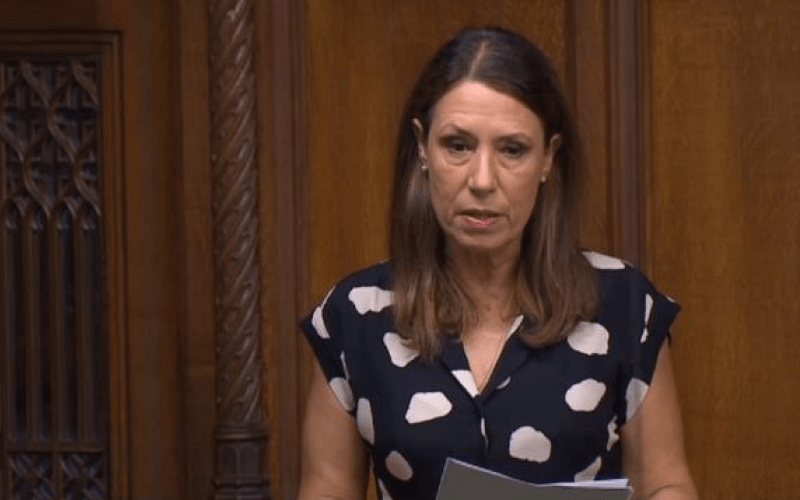 The minister for disabled people is today (Thursday) facing questions over why he misled a senior Labour MP about his department’s cover-up of links between its “fitness for work” test and the deaths of disabled people.

The failure by Justin Tomlinson to provide the truth about information his department failed to provide to five independent reviews comes as he and other work and pensions ministers face mounting pressure over the cover-up, revealed by a lengthy Disability News Service (DNS) investigation.

This morning (watch from 10.57am), Labour’s Debbie Abrahams was granted an urgent question in the Commons to ask work and pensions minister Will Quince why the Department for Work and Pensions (DWP) failed to pass crucial evidence about the deaths to the two independent experts commissioned by ministers to carry out five reviews of the work capability assessment (WCA) between 2010 and 2014.

DNS revealed in May that DWP had finally admitted that two letters written by coroners to warn that the WCA had been linked to suicides, and a series of secret “peer reviews” into the deaths of claimants who had gone through the WCA process, were not passed to the second reviewer, Dr Paul Litchfield, in 2013 and 2014.

This morning, Abrahams (pictured) told Quince: “A government’s first duty is to protect its people. All its people. But they are failing the sick and disabled. And this reveals the enormity of this failure.”

She asked Quince to confirm that the documents were not passed to Litchfield, and she called for an investigation.

She said the information commissioner had heard from members of DWP staff who were part of Litchfield’s team, and she asked whether the department had asked Litchfield and Professor Malcolm Harrington – who carried out the first three reviews of the WCA – whether they had received the documents, and “if not, why not”.

Abrahams said: “Given their remit was to examine the WCA and many of these reviews and coroner’s letters contained grave concerns about the assessment process, why did the department not provide them?”

She also asked Quince to promise to publish redacted versions of the 84 secret reviews carried out by DWP since 2015 – most of which will have involved the deaths of claimants – and the six still underway.

Quince told Abrahams that recorded information to show what documents were shared with Litchfield “no longer exists, in line with the department’s document retention policy”.

But he failed to tell MPs about the DWP’s admission to the information commissioner that members of Litchfield’s team who still work for DWP have said in statements – following a freedom of information complaint by DNS – that the coroner’s letters and peers reviews were never shared with Litchfield.

Labour’s shadow work and pensions secretary Margaret Greenwood said: “Surely it should have been the department’s responsibility to ensure that the reviewer had all the relevant information.

“There is a systemic problem at DWP when it comes to meeting the needs of disabled people and the facts speak for themselves.”

She called on the government to agree to an independent inquiry into links between DWP’s actions and the deaths of disabled claimants, as demanded by the Justice for Jodey Whiting petition*.

Quince said that DWP would have shared relevant documents with Litchfield and Harrington, but “they were not requested”.

But Abrahams pointed out: “If they were unaware of the existence of these documents, how could they request them?”

Frank Field, the independent MP and chair of the Commons work and pensions committee, said it was the duty of government departments to produce information and it was “not for the chair of an inquiry to fish for information which would be crucial to the proper consideration of events that lead to someone’s death”.

Carol Monaghan, for the SNP, also backed the calls for an inquiry into deaths linked to the government’s social security reforms.

Christine Jardine, for the Liberal Democrats, said DWP had “given us a number of reasons for why these documents and information were not available.

“But to the public and those affected, it will seem that there can be only two acceptable or reasonable reasons, which are either that it was deliberately withheld, covered up, or it was incompetence.

There are also serious concerns over a letter that Justin Tomlinson, the minister for disabled people, wrote this week to Abrahams about her concerns.

Tomlinson told Abrahams that because of the length of time since the last of the reviews was published – more than four years – “factors such as document retention policies, organisational changes and staff turnover, means that information that might help answer these queries is no longer available”.

But that statement is not true.

The DNS complaint to the Information Commissioner’s Office led earlier this year to a confirmation by DWP that neither the peer reviews nor the coroner’s letters were sent to Litchfield.

But this fact was withheld by Tomlinson in his letter to Abrahams.

Abrahams, herself a former shadow work and pensions secretary, also raised the letter and the failure to pass the information to Litchfield in a point of order in the House of Commons yesterday, which led to today’s urgent question.

Abrahams, one of the few MPs so far to back the Justice for Jodey Whiting petition* publicly, repeated her call on Wednesday for an independent inquiry into deaths links to DWP actions, one of the petition’s key demands.

She said she wanted to raise her “grave concerns” about DWP’s investigations into claimant deaths linked to its actions.

She said: “We are talking about the circumstances of people’s deaths about five years ago.

“To tell me that these documents can’t be found smacks at least of incompetence and at worst of a cover-up.”