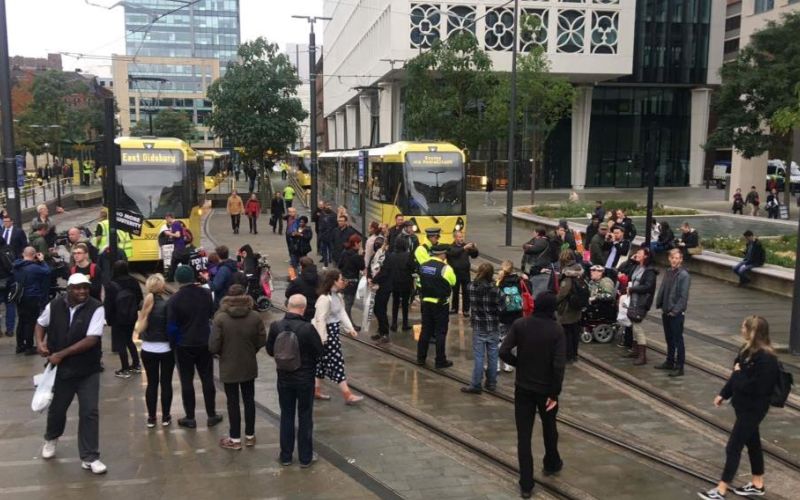 A handful of activists from the Disabled People’s Direct Action Network (DAN) and Disabled People Against Cuts (DPAC) held up some Manchester city centre tram services for about 90 minutes through their spontaneous demonstration.

They had been returning from taking part in the People’s Assembly anti-austerity march through the city on Sunday afternoon.

But as they entered St Peter’s Square, just 100 yards from where the Conservatives were holding their annual party conference, they saw police had forced a small group of young protesters into a designated protest area.

The disabled activists, including several wheelchair-users, were unable to enter this “kettled” area, which the police had designated as the zone where demonstrators were allowed to protest lawfully against the Conservative conference.

Faced with nowhere to protest peacefully about the impact of Tory austerity policies on disabled people, and angry at the way the young protesters were being treated, about half a dozen DAN and DPAC activists decided to block two of the tram lines that run through the city centre.

After a 90-minute stand-off (pictured), in which they were joined by other protesters, and city centre trams were unable to pass through St Peter’s Square, police officers arrested activists Dennis Queen and Sharon Hooley, both wheelchair-users.

Both activists were eventually carried away from the site of the protest in their wheelchairs by police officers.

Although Hooley was cautioned for wilful obstruction of the highway and released, Queen was charged with creating a public nuisance, and is due to appear before Manchester magistrates on 17 October.

Although she was released on bail, she has been banned from entering Manchester city centre.

Terry Hutt, an 82-year-old veteran DAN activist, showed Disability News Service (DNS) the purple bruises he said he received on his arm from being grabbed by a police officer during the protest.

He sat on his walking stick on one of the tram lines during the protest, and said: “If they can push me around, they can push anybody around.

“It’s sad to have to fight for your rights.”

Hooley told DNS after the protest that they had decided to act after seeing the situation between the police and the young protesters “heating up”.

She said: “You just knew at some point they would wind them up enough so they would use more force and it was getting dangerous. We just had to do something.

“That’s when we all agreed that the only way to get their attention was to stop the trams till they would let them go.

“I didn’t expect it to take two hours, though. I had never been arrested on a protest but my heart told me it was the right thing to do.

“I and we could not stand by and see the bullying behaviour of our police force and let them get away with it.”

She said the officer who spoke to her had been “lovely” and that she had explained to her that “I had to do this, to free those young protesters, and to show we would not leave them behind in the right to protest freely and peacefully.

“The officer actually asked me possibly eight times if I would move but each time I stood my ground.”

When the officer began reading her rights to her, “the noise suddenly got horrendously loud and I realised I was surrounded by officers.

“I was scared beyond belief and curled over my dog, who was also shaking with fear.

“Next thing I’m carried off to another pavement and I was asked to drive my chair to a quieter corner.

“I didn’t experience what my friends did, but I hope those responsible will be reprimanded for their heavy-handedness.”

Hooley volunteers as an advocate for other disabled people and said she had “seen and dealt with some horrific stories that they have had to endure” as a result of government austerity policies.

She said she had wanted to take part in the march to protest about her experiences of “this Tory hatred that is poisoning our society, our streets and our homes.

“We are going back to Victorian times and I had to be counted in solidarity to all those fighting.”

Another activist, Sam Brackenbury, said he had been protesting about the deaths of countless disabled people from years of Tory welfare reform, including a close personal friend of his who had died of a heart attack just eight days after being “kicked off ESA [employment and support allowance]”.

He said he was also angry about the policing costs and road closures the city had had to endure for the conference to take place.

At one point in the action, he and fellow activist Chris Hughes were completely surrounded by a cordon of police officers.

“Rather than slagging off Jeremy Corbyn, which is all they seem capable of doing, why not come out and face the disabled people they are putting in poverty and killing.

“Have a bit of decency and guts rather than hiding behind the cordon.”

Hughes said officers had been “heavy handed”, were “throwing their weight around”, and had drafted in police horses, with three horses at one point in front of him and Brackenbury, both of whom are wheelchair-users.

He said he had wanted to draw attention to the way the Tory government has been “killing off disabled people”, and the issues raised in August’s report by the UN committee on the rights of persons with disabilities, which told the UK government to make more than 80 improvements to the ways its laws and policies affect disabled people’s human rights.

He said disabled people’s rights had taken a 15-year step backwards in the last five years, while the social care system had “gone to pot”.

Hughes said he hoped the protest would help prevent the Conservative conference from returning to Manchester in future years.

Another of the activists who was at the protest said: “If we can’t protest lawfully, we will protest somehow.

“If that is what it takes to draw attention to the issues, it is a small thing.

“This government is committing grave and systematic violations of disabled people’s human rights.

“Maybe Manchester will think again before allowing the Tories back here.”

A spokeswoman for Greater Manchester police said in a statement: “Our officers tried everything possible to reason with protestors who were blocking tram lines out of Manchester city centre causing major disruption across the network and having a significant impact on the travelling public across Greater Manchester.

“A number of the protestors voluntarily moved but others remained with no regard for the impact their actions were having on others or the potentially dangerous situation they were creating on a live tram line.

“With the right to protest also comes a high degree of personal responsibility.

“Our officers had no option but to arrest these individuals and used reasonable force to move them in a safe manner for everyone involved.”

But Hughes said that the force used by officers “was not reasonable, it was unreasonable”.