You are here: Home / Politics / Tory conference: Anger over IDS ‘work your way out of poverty’ call 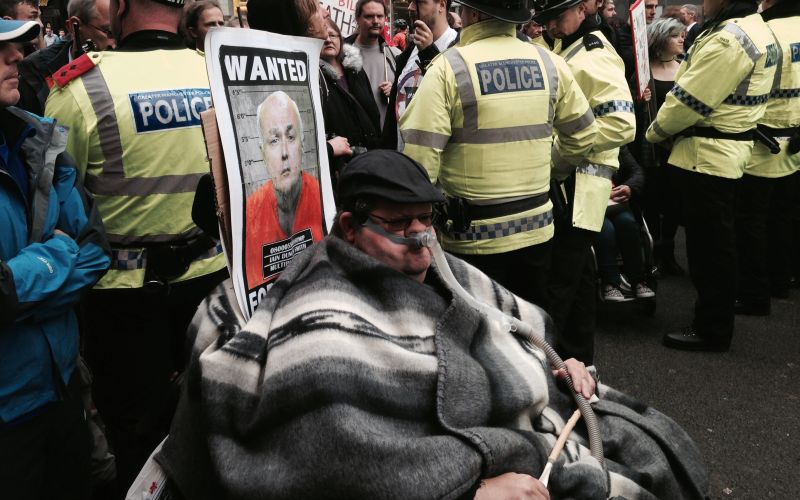 Work and pensions secretary Iain Duncan Smith has been accused of insulting disabled people by telling them to “work your way out of poverty”.

His speech to the Conservative conference was short on policy detail but heavy with rhetoric, including a promise that the party would deliver on its election pledge to be “the party of working people”.

It came a day after a conference speech by the chancellor, George Osborne, made repeated references to the need to deliver “lower welfare”.

A large section of Duncan Smith’s speech was devoted to what he called “the sickness benefit”, employment and support allowance (ESA), which he said was “Labour’s last great legacy” and treated people as “passive victims”.

Duncan Smith provided no information about any plans to reform or scrap ESA and its discredited eligibility test, the work capability assessment (WCA).

He also failed to acknowledge any potential for his existing policies and reforms to cause harm to sick and disabled people, in the face of overwhelming evidence collected by campaigners, journalists and academics, particularly around the damage caused by benefit cuts, the introduction of personal independence payment and the ESA system.

This week, relatives of two disabled people who died after having their out-of-work disability benefits withdrawn – and who believe that those decisions contributed to their family members’ deaths – were protesting outside the conference alongside Disabled People Against Cuts.

Last month, Disability News Service uncovered a coroner’s report, addressed to Duncan Smith’s department, which said that the decision to find a London man, Michael O’Sullivan, fit for work had been the trigger for his decision to kill himself.

Despite this widely-publicised case, Duncan Smith told the conference: “The evidence of our reforms is that people respond to incentives. We know that. We know that in our hearts.”

He added: “We won’t lift you out of poverty by simply transferring taxpayers’ money to you.

“With our help, I say to them, you will work your way out of poverty. That is the pledge we make to those who need our support.”

There was anger among many disabled activists on social media who had listened to Duncan Smith’s speech.

Disability Labour, @disabilitylab, tweeted: “No-one gives up good jobs or chooses sickness or disability, it can and does happen to anyone. IDS speech is an insult to us all.”

One activist, @latentexistence, said: “Iain Duncan Smith telling sick and disabled people to work their way out of poverty is pretty much indistinguishable from [the Nazi concentration camp slogan] arbeit macht frei [work sets you free].”

The WOWcampaign, @wowpetition, tweeted: “He thinks disabled people can work their way out of poverty as if we have a choice http://wowpetition.co.uk.”

And @elphiemcdork added: “I mean, he’s really not sugar-coating the ‘disabled people are fakey scroungers’ rhetoric now is he? He’s just comin’ right out with it…”