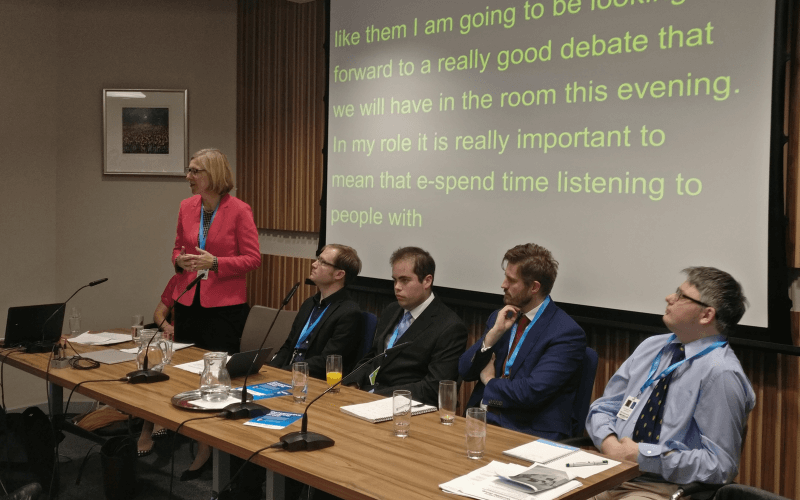 Two disability charities are facing questions over their close links to the Conservative party, after they failed to challenge the minister for disabled people about government policies at a conference fringe event.

Both Bipolar UK and the Epilepsy Society have close links with the party, Disability News Service has established.

Bipolar UK’s chief executive has twice stood for the party in a general election, while the chair of the Conservative Disability Group (CDG) works as a public affairs consultant for the Epilepsy Society.

The chief executives of both charities failed to criticise and challenge the government in their speeches at the fringe event, despite years of anger directed at Conservative-led governments by user-led organisations, charities and disabled people – including many with bipolar and epilepsy – following eight years of austerity cuts and unpopular reforms to disability support.

Last autumn, a UN committee of disabled human rights experts delivered a damning verdict on the UK government’s progress in implementing the UN Convention on the Rights of Persons with Disabilities.

The committee said then that it was “deeply concerned” that the government still believed it was a “champion of human rights”, while its chair said that cuts to social security and other support for disabled people had caused “a human catastrophe” in the UK.

But neither of the charities took the opportunity to criticise the government, while sharing a platform with the minister for disabled people, Sarah Newton (pictured, left).

The fringe event was hosted by the Conservative Disability Group and was supposed to discuss ways to make society more inclusive for people with invisible impairments.

Peter Hand (second from left), the group’s chair, is a former public affairs manager for Leonard Cheshire and is now a public affairs consultant for the Epilepsy Society. He chaired the fringe meeting.

Another speaker was Simon Kitchen (second from right), chief executive of Bipolar UK, a former senior executive with both Leonard Cheshire and the Alzheimer’s Society, who contested Newcastle Central for the Conservatives in 2015 and then Newcastle East at last year’s general election.

In his speech, Kitchen stressed the medical and treatment aspects of bipolar, and dismissed any suggestion that inclusion or the social model were relevant to people with the condition.

He said: “For people with bipolar, it is a very serious, serious illness that can do real serious damage to people.

“And I think that is important when we think about inclusion, because often in understanding why we say we talk about the social model of disability and the importance of inclusion, but for people with bipolar it’s actually the condition itself which excludes people from society.

“It’s what keeps them in hospital, it’s what ruins their careers, it’s what destroys their families.

“So for me, in terms of being able to promote inclusion for people with invisible disabilities, it has to be for people with bipolar tackling the medical side of it as well.”

He said that about half of Bipolar UK’s staff and trustees had disclosed a diagnosis of bipolar, as well as hundreds of its volunteers, and that his charity “just about function well as an organisation”.

Pelham told the fringe meeting that before talking about what more could be done on inclusion it was important to “celebrate how far we have come” and the “enormous progress” that has been made.

She said her charity had been founded 100 years ago to provide refuge for people who were previously confined to workhouses or asylums, “safe from the blatant hostility” and “physical threat” from the communities they would otherwise be in.

She also said she could remember a time when Scope was called “the Spastics Society”, and when a child who lived in her road “went off on a bus somewhere” to school and was called “the spastic in the road”, and how mothers would not let their children play with him.

She said: “Life isn’t like that any more. And there is lots of credit to people in this room and to governments that have shown leadership about the journey that we have come.”

Pelham claimed there was a moment during the London 2012 Paralympics when “we all just noticed that we are at ease with this, we were all comfortable with the Paralympics and I think we felt as a country proud of ourselves. I did.

“We had a leadership problem. We took a problem and together, drip drip, changing the language, changing the attitudes, we changed the world.

“There’s still lots, lots more to be done but for many, many people with physical disabilities, life is better than it would have been 40, 50 years ago.”

Asked afterwards why the Epilepsy Society failed to challenge the government on its policies, Hand refused to answer the question.

But he said in a statement: “The event was a great success, we have received excellent feedback from those who attended and we were delighted that the venue was full – it was a great opportunity for the CDG to engage with the wider disability sector.”

Hand said he had been chairing the event in his capacity as CDG chair.

Kitchen refused to say why he had failed to challenge the government, and why he had dismissed the social model for people with bipolar.

But he said in a statement: “Bipolar UK engages with, and makes representations to government, on a range of issues relevant to the concerns and aspirations of people with bipolar in this country, through a range of different forums, including events such as the Conservative Disability Group’s recent fringe event in Birmingham.

“Bipolar UK will continue to engage with government on this basis to help improve the lives of people with bipolar and create a more inclusive society for those who live with the condition.

“We also work hard to combat the stigma and discrimination associated with the condition.”