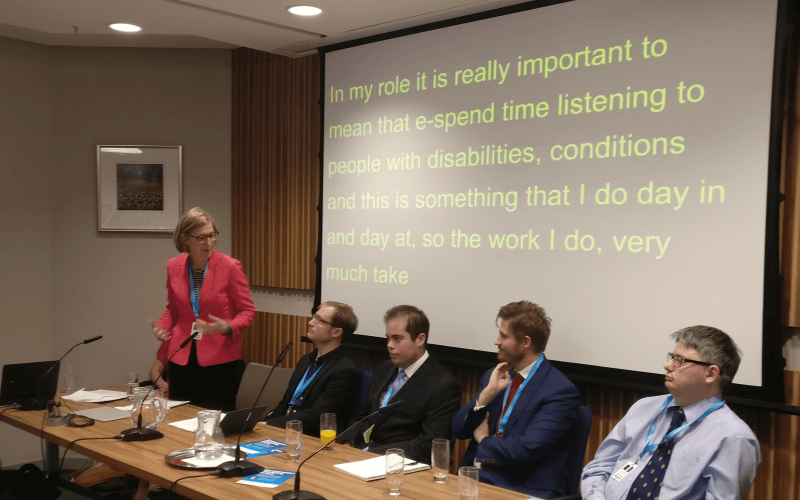 The minister for disabled people appears to have breached the ministerial code of conduct, after refusing to answer questions at her party’s annual conference and suggesting that civil servants could answer them for her instead.

Sarah Newton’s office had failed to respond to emails requesting an interview sent in advance of the conference by Disability News Service (DNS).

And when approached by DNS before a fringe event run by the Conservative Disability Group on Sunday, Newton said she would not answer any questions at conference, either in person or by email.

After DNS failed in a bid to ask Newton a question during the fringe event (pictured), she also refused afterwards to answer even one question about her work as minister for disabled people.

Newton suggested instead that DNS should submit questions to the Department for Work and Pensions (DWP) press office, even though DWP would not be able to answer those questions because civil servants are not allowed to play any part in political events.

This would be a breach of the Civil Service Code, which says civil servants should not “act in a way that is determined by party political considerations, or use official resources for party political purposes”.

The ministerial code of conduct says that ministers “must uphold the political impartiality of the Civil Service, and not ask civil servants to act in any way which would conflict with the Civil Service Code”.

Despite dodging questions from the disabled editor of DNS, John Pring, Newton told the fringe event: “In my role, it is really important to me that I spend my time listening to people with disabilities and health conditions and this is something that I do day in, day out.”

Asked whether Newton would face any action for apparently breaching the ministerial code of conduct, the Conservative party had refused to comment by noon today (Thursday).