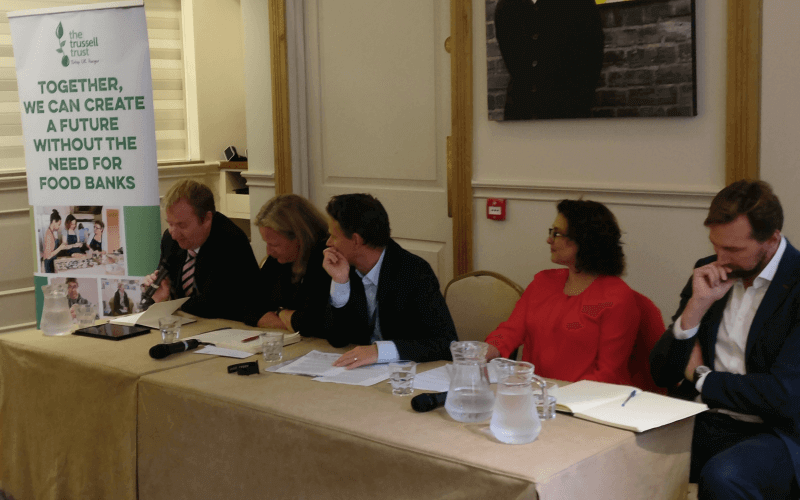 The boss of a homeless charity that provides services just a short walk from this week’s Tory party conference has told party members that universal credit is causing early deaths, addiction, mental distress and suicides, with claimants “at the end of their tether”.

Yvonne Hope, chief executive of the Manchester charity Barnabus, which works mostly with rough sleepers, said universal credit (UC) had caused poverty levels that were “a throwback to the Victorian era”.

UC was first introduced in Manchester in 2014 and Hope said the levels of sanctions and “destitution” seen in those early days were now over for most people.

But she added: “We continue to see a development in poverty which I think my whole team thinks is a throwback to the Victorian era where they have almost created ghettoes of people who are never going to be able to move on.”

And she told the fringe event – which was organised by The Trussell Trust and Lloyds Bank Foundation – that the “killer” for her clients was the five-week wait for a first payment after moving on to UC.

She said: “When you’re dealing with people who have nothing, who are already destitute… five weeks is the difference between being able to feed yourself, being able to remain housed, being able to pay the bus ticket.

“It throws you on the resources of churches, charities, and other organisations.”

She said many people in Manchester and around the country were ending up on the street because of UC, while the slide into homelessness was “almost inevitable” if someone was already in housing arrears when moving onto UC.

She described what happened to a client called Darren, who came to Barnabus after he had been sleeping rough for a couple of nights following a relationship breakdown.

He had been experiencing anxiety and depression and self-medicating with alcohol, she said.

After he was moved on to UC, Darren was left with less than £200 a month to live on because of debt repayments, including repaying the loan he had been forced to take out from the Department for Work and Pensions as a result of the five-week wait, and because his rent was higher than his housing benefit.

The experience left him suicidal, she said, although Barnabus managed to intervene and “get his life back on track”.

Hope said: “He is only one person and his story is so common. We hear it every day.”

She said there was a need for more affordable housing; to persuade landlords to take on UC claimants who did not have steady jobs; and for more flexibility in the UC system.

“We are going to see more addiction, more mental illness issues, more unemployment, earlier deaths because of bad health, and sadly I think we are seeing a rise in suicide rates because people have just had enough, they are at the end of their tether.”

“When I am challenged by fellow volunteers at Worcester foodbank who say how can you possibly be a Conservative bearing in mind what you do here, that makes me worry.”

He asked what could be done to make the Conservatives be seen again as a “caring and compassionate party”.

But Mills said it was “fair” of the government to ask people to go through a process to ensure they are entitled to receive support, and he added: “What we are trying to do through these systems is help people progress, improve their lives and their families’ lives.

“We are not trying to punish them. This was a reform designed to make welfare pay, make it simpler for people… we need to smooth out the edges, clear out the things that just aren’t working.”

Emma Revie, chief executive of The Trussell Trust, which supports a nationwide network of about 1,200 foodbanks, said the charity’s concern at the moment with UC and the benefit system was that “instead of holding people up at a time of crisis, at a time of need, it’s actually helping to pull them further down into poverty and into destitution”.

She said that relationships were being “broken by the crushing pressure of not having enough money”.

She said: “Often it is a corrosive effect of poverty and destitution that we lose our relationships and we lose the family and friends that we used to be able to reply on.”

In the last five years, the trust has seen a 73 per cent increase in the number of people using its foodbanks.

She said that half of those who come to a foodbank are from a household containing a disabled person or someone with a long-term health condition, and so already have higher essential costs.

She said: “Our new benefit system is definitely, unquestionably, working for many people, but for a significant minority it is not working.

“The problems they are experiencing with the five week-wait, government debt repayment, which leave them with not enough to cover essentials and low levels of payment, and much more, are causing people to have to come to a food bank to receive donated goods.

“We need to start listening to the people who are telling us [universal credit] is not working.”

She added: “Our data shows us unquestionably that the longer an area has universal credit in rollout, experiencing that five-week wait, the higher the numbers of people who are having to come to foodbanks.”

Mills agreed that for some people the five-week wait “was just not working”.

And he said people moving onto UC from other benefits should be able to “seamlessly migrate so they don’t notice a change”.

He said: “There is no logical sense in putting people into debt at the start of a claim, when they have been in the system for a while before.”

Edward Davies, director of policy at The Centre for Social Justice, which designed UC in 2009 and is chaired by Iain Duncan Smith, the former work and pensions secretary who introduced UC in 2013, said problems with UC had to be tackled at the same time as issues like addiction, education failure and debt.

He said that one of the problems with UC was that the provision of universal support – which was supposed to be a key part of the system for those with complex needs – was “not doing two per cent of what it could do”.

But Davies said: “When we met with some very senior cabinet members of the former [Tory] administration, they didn’t even know what it was.”

He said universal support needed to be higher up the agenda.

Revie agreed, and said that more than two-thirds of people using foodbanks who were claiming UC did not know about universal support.

Davies said the impact of family breakdown was also important, and he added: “We need to start talking about family a lot more… politicians hate talking about it.

“Look at the current prime minister [Boris Johnson]. He’s not going to want to talk about this.”