You are here: Home / Activism and Campaigning / Tory peer faces calls to quit as EHRC commissioner over support for WRAG cuts

Disabled campaigners are calling for the resignation of the equality watchdog’s disability commissioner, the disabled Tory peer Lord [Chris] Holmes, after he voted in favour of disability benefit cuts when they had been condemned by his own organisation.

The letter to Lord Holmes (pictured) at the Equality and Human Rights Commission (EHRC) has been signed by many of the organisations that have led opposition to the government’s cuts and reforms to disability benefits over the last six years.

It comes a week after Disability News Service reported concerns over the government connections of Lord Holmes and the government’s preferred candidate to be EHRC’s next chair, David Isaac, at a time when the commission was preparing to investigate whether Tory welfare reforms have breached the human rights of disabled people.

The letter, written by Scottish disability rights campaigner Susan Archibald, has been signed by leading figures from organisations such as Disabled People Against Cuts, Black Triangle, Pat’s Petition, The Centre for Welfare Reform, Carer Watch, and the Spartacus online campaigning network, as well as Professor Peter Beresford, co-chair of Shaping Our Lives.

It is part of a new campaign from an alliance of anti-austerity, grassroots groups from Scotland and the north of England that are committed to fighting for equality – the Cross Border Alliance – that will “name and shame” public figures “colluding in the cuts to disabled people and not addressing disabled people’s rights”.

The letter has also prompted a petition, again calling for Lord Holmes to resign from the commission.

Archibald points in her letter to the decision of Lord Holmes to vote in favour of measures that will cut payments by £30 a week for new employment and support allowance (ESA) claimants placed in the work-related activity group.

She points out that the commission expressed concern that this measure “will cause unnecessary hardship and anxiety to people who have been independently assessed and found unfit for work”.

In a briefing document published earlier this year, EHRC also said the measure would be “likely to have a disproportionately adverse impact on disabled people”.

In her letter, Archibald tells Lord Holmes, who chairs the commission’s disability committee, that his actions “will have a detrimental effect on disabled people’s lives” and undermine the UK’s human rights obligations.

She adds: “As a disability rights campaigner I am calling for your immediate resignation of the position you hold as disability commissioner and chair of the disability committee for EHRC as alongside my peers and other user led organizations we think you are no longer worthy of this position.”

Lord Holmes said in a statement: “It is public knowledge that I am a Conservative peer in the House of Lords.

“In that context, I will sometimes vote or take a position that is either personal or different from that of the EHRC.

“I completely respect people’s right to disagree with how I have voted in the past and I know these are deeply held views on these issues.

“But these are complex and sensitive issues. Public bodies would be immeasurably weakened if they were only drawn from people with only one viewpoint or one sort of background.”

An EHRC spokesman said it had been “robust in challenging the government to ensure its welfare reform programme protects the rights and standards of living of disabled people and supports their inclusion and independence, and this has been reported many times by DNS over the past year”.

He said the commission’s business plan “sets out an ambitious programme of work to tackle discrimination and promote equality of opportunity and human rights for disabled people.

“The strength of our board comes from the breadth and diversity of skills, experience and viewpoints our commissioners bring to bear on the important issues we tackle.

“It is not uncommon for commissioners to have different views on an issue, and we welcome the constructive and challenging debate through which the board reaches its collective decisions.

“The important thing is we have rigorous processes in place to avoid any conflicts of interest, including commissioners being required to comply with the principles of public life [first set out by Lord Nolan in 1995] and our code of conduct, with a register of interests publicly available.”

Meanwhile, the joint committee on human rights and the women and equalities committee last night (20 April) declined to recommend Isaac’s appointment as the new EHRC chair because of a “serious potential conflict of interest” relating to his role as a partner at the law firm Pinsent Masons, which has a “significant amount of business with the government”, including the Department for Work and Pensions. 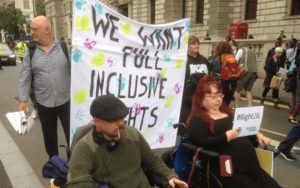 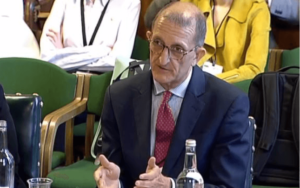