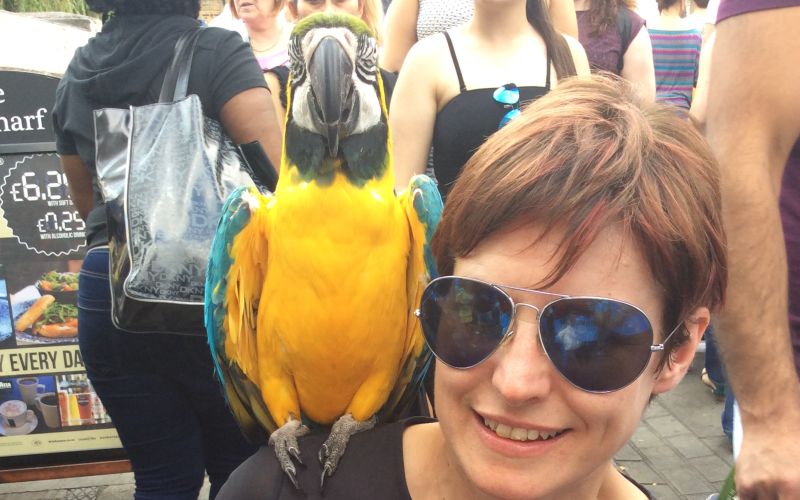 A maths teacher who was told by managers after she became disabled that if she had been a horse she would have been “taken out and shot” has spoken of a campaign of bullying and harassment that left her traumatised and suicidal.

Catherine Scarlett (pictured) spoke out this week after an Ofsted report found the comprehensive where she used to work, Driffield School, in Yorkshire, to be “inadequate” in all five areas it examined, and placed it in special measures.

Her case has been described as “shocking” by the leading inclusive education consultant and campaigner Richard Rieser, who said it showed how the treatment of disabled teachers had failed to improve in nearly 30 years.

Scarlett has told Disability News Service how the school ignored her requests for reasonable adjustments, even though they were backed by her GP and the government’s Access to Work (AtW) scheme.

The school also refused to commission disability equality training, even though AtW said it would fund the training.

The school, its governors and East Riding of Yorkshire Council all refused to act after Scarlett reported the bullying and harassment she had been subjected to.

When she complained to the council’s human resources department, it insisted that the provision of reasonable adjustments under the Equality Act was “about equipment and not policy”.

She is now taking the school to an employment tribunal, and hopes to prove disability discrimination under the Equality Act.

She started working at the school in 1999, but it was not until 2012 that her physical impairment began to affect her job through a weakening of her right arm.

Scarlett said the bullying and harassment started almost immediately. “They ignored the requests for reasonable adjustments by my GP and kept emailing me and writing to me demanding that I got a diagnosis at my next hospital appointment.

“I began to crack with all the harassment, which included them stopping me and asking medical questions in busy corridors, calling meetings then cancelling them when I said I was taking the union rep, and then just dropping in to my classroom for the meetings.”

After she started using a wheelchair, she was told the accessible toilet was “down a flight of steps, round a corner and up another flight of steps”.

When she objected, managers “joked” that she would have to stop drinking or would need to have a catheter put in.

She was also told that she couldn’t be a teacher now she was using a wheelchair, because she wouldn’t have the necessary “presence” in the classroom.

She added: “I also struggled with doors as they had the door closers set too tight and so I couldn’t get in and out of the main doors to the building.

“It took over a term for them to put an automatic door in and change the door closers and put rails in the toilet.”

It took a year for the school to order her the specialist equipment she needed.

The school also moved her department to an inaccessible building, where most of the rooms were upstairs.

Although her new classroom was downstairs, the school said it would put in a platform lift so she could reach the rest of the maths department, but she warned that it would be inaccessible to her because of the controls. They went ahead and installed it anyway.

Her new classroom was so small there was not enough room for her to reach all of the children in her wheelchair, or to bring in the specialist chair that was supposed to provide her with the support she needed.

When she complained about the new classroom, she was told she was “being awkward and that soldiers coming back from Afghanistan adapted so why couldn’t I”.

Her psychologist advised the school not to cause her any further stress because she was suicidal, but just three days before going into hospital last June for possible tests for motor neurone disease – which was later ruled out – she was sent a letter saying she had been sacked.

Her internal appeal against her dismissal also took place while she was in hospital.

Scarlett said the Ofsted report vindicates many of her own concerns about Driffield and its leadership, and also those raised by parents, who she says were “fobbed off” by both the school and the council when they complained.

Ofsted said that governors had not “ensured they meet their duty under the Equality Act 2010 because not enough pupils develop tolerance of people who are different from themselves”, while a “significant number of pupils, and their parents, have deep-seated concerns about bullying”.

Ofsted also said that disadvantaged and disabled pupils were “more likely to be excluded or placed in the seclusion room than other pupils”.

Scarlett said she still cannot understand why the council refused to act on her concerns.

She said: “The school seemed intent on driving me to a nervous breakdown, and the council seemed to sit back and allow it to happen.

“Why didn’t they jump in? I just don’t understand why they thought it was acceptable to allow the school to carry on treating someone like this.”

She now has “really quite severe PTSD”, as well as the physical impairment, for which she has yet to receive a diagnosis. Although her children attend the school, she is too traumatised to attend parents’ evenings.

But she believes her case is far from unique.

She said government regulations state that a teacher must have the health and physical fitness to be able to teach.

“One of the big things in education is this idea that you have to be absolutely fit to be able to be a teacher. Successive governments haven’t got rid of it.

“As soon as teachers get sick and disabled, a lot of them are being pushed out. A lot of people hide their disabilities as they are too scared to disclose, so they are not getting the reasonable adjustments they need.”

Rieser said Scarlett’s case was “very strong”, and that the school had “a real attitude problem which amounts to disability discrimination in my view”.

He said: “She’s a young teacher with a promising career in front of her which effectively has been wrecked because the school were not prepared to make a few adjustments. I think it’s shocking.”

Rieser said the attitude that people with various impairments could not be teachers did not appear to have changed since he started writing about such discrimination in 1989 through an article in the Times Educational Supplement.

He said: “I really don’t think things have improved since then.”

And he warned that the government’s push towards making all schools academies – with decisions increasingly made by chains of “unaccountable, unelected” academies – would “squeeze out good teachers who might cost a little bit more because they need reasonable adjustments”.

He said both teachers and parents – who risk losing the chance of their children having disabled role models teaching in their classrooms – should be aware of the danger of the push towards academies.

He added: “There is also a message to head teachers, that they had better buck their ideas up and take account of the legal requirements of the Equality Act.

“They have a specific duty to make reasonable adjustments and that duty is an anticipatory duty.”

A spokeswoman for East Riding of Yorkshire Council said: “It is not appropriate to comment or respond to the statements made by Mrs Scarlett at the present time whilst there are ongoing legal proceedings.”

But she confirmed that Driffield’s head teacher was “no longer at the school”.

She added: “Clearly the outcome of the Ofsted inspection is very disappointing, but major steps are already in place to address the issues raised.

“The council is continuing, with external partner schools, to provide a high level of support to Driffield School while an urgent programme of action is implemented to secure the necessary improvements.”

Dave McCready, the school’s new interim executive headteacher, said in a statement: “Although the news that Driffield School has been placed into special measures will come as a shock to students, parents and the local community I am confident that the school has the capacity to make the rapid progress required to move out of this category.”