You are here: Home / Activism and Campaigning / Treasury rejects delivery of last-ditch appeals for £20 uplift 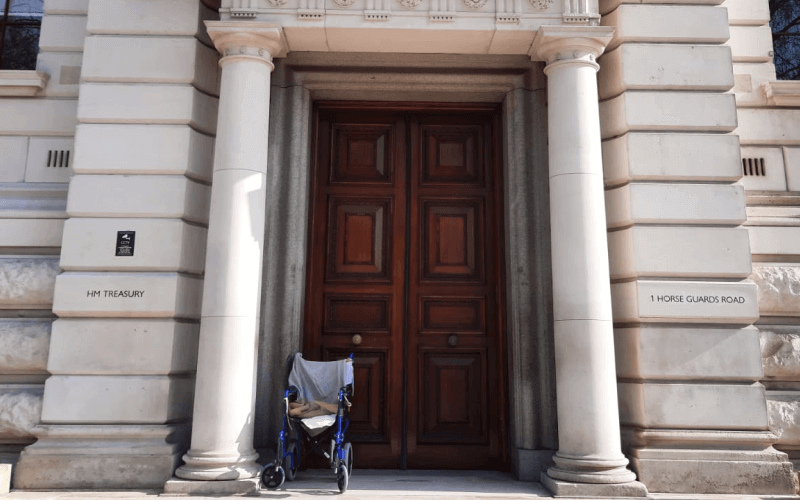 The Treasury and Downing Street have rejected deliveries of appeals from disabled people for ministers to pay attention to their urgent need for an increase in their benefits, after the evidence was delivered to their front doors.

Personal accounts from disabled people of how the pandemic has left them in desperate financial straits were delivered by courier to the Treasury (pictured), 10 Downing Street, and the Department for Work and Pensions (DWP).

The deliveries were part of Monday’s #20More4All day of action, organised by Disabled People Against Cuts (DPAC) with support from mainstream grassroots groups and unions*.

They were hoping for a last-minute change of mind from the chancellor, Rishi Sunak, who delivered his budget yesterday (Wednesday).

They reminded the chancellor that a £20-a-week uplift had been handed to universal credit recipients last March, at the start of the pandemic, but has never been extended to those on so-called legacy benefits, such as employment and support allowance (ESA).

Despite their efforts, Sunak failed to use the budget to extend the uplift to those on legacy benefits (see separate story).

This means that an estimated 1.9 million disabled people will continue to miss out on the £20-a-week payments.

Early in the crisis, work and pensions secretary Therese Coffey said that extending the uplift to those on legacy benefits like ESA and jobseeker’s allowance (JSA) would risk the “safety and the stability of the benefit system”.

She is now advising legacy claimants that they could switch to universal credit if they want to benefit from the uplift, even though many would be worse off under the new system.

Those in the ESA work-related activity group or on JSA are set to receive a rise of just 37p a week in April to help meet the annual increase in the cost of living, which, DPAC said, does not reflect the rising costs that disabled people have faced during the pandemic.

Copies of the testimonies from claimants of legacy benefits were delivered in postbags placed on empty wheelchairs, alongside items that represented the struggles that many disabled people are facing during the pandemic, including a blanket, an empty purse and an incontinence pad.

All three deliveries were rejected by the government departments, although DWP did accept a letter and a report collating the testimonies and other evidence that demonstrated the need for the uplift to be extended.

Many of the disabled people who described why the uplift was needed spoke of their “soaring food costs”, including the extra costs of needing to have food delivered during the pandemic, and how they have “to choose between eating and heating”.

One said: “I would be able to bathe more and have my heating on. And be able to eat three times a day instead of two times.”

Another said: “I would be able to afford all the toiletries and cleaning products that I need and buy second-hand clothes to replace the ones I have with holes in them.”

Another said: “The last year has been so tough, coping with illness during a pandemic, lockdowns and isolation have made me worse than I already was which is challenging enough, but not getting the uplift like those on universal credit just heaped on more stress as well as adding a sense of worthlessness and that you simply just don’t matter.

“Abandoned whilst hearing daily claims about throwing their arms around the whole nation and leaving no one behind, just so cruel and unjust.”

The testimonies had come in emails to DPAC and in response to a survey set up by DPAC Sheffield and disabled campaigner “Ben Claimant”, and another by the Unite Community union.

Linda Burnip, co-founder of DPAC, said the survey results showed how necessary the uplift was.

She said: “People, especially those in the work-related activity group [of ESA], who are being forced to live on a measly £74 a week, are being left to starve or freeze.

“Even in austerity-struck Tory Britain, this is totally unacceptable.”

Jennifer Jones, founder of DPAC Sheffield and herself on legacy benefits, said: “I cried reading the replies; so many people who feel just like me – forgotten, unwanted, or a burden – stated that they would wish the extra support for only the most basic necessities.

“To eat three meals a day, to be able to wash themselves and their clothes and to keep warm. We’re not asking for the moon on a stick. Support us to live.”

Ben Claimant, who is also on legacy benefits, said: “For me the comments quite clearly demonstrate how much the extra £20 is needed for the most basic of human needs.

“In a wealthy country, even after spending 10 years living through and being affected by austerity, it is deeply troubling that disabled people and families with dependent children are missing out on meals and cutting back on heating.”

A DPAC spokesperson had said on Monday: “The government often claims to protect what it calls ‘the most vulnerable’, but once again it is precisely those who are ‘most vulnerable’ whose needs are being ignored.

“This has created a two-tier social security system, giving the distinct impression that disabled people’s suffering is of no concern to this government.

“We’ve heard denials that the pandemic has led to extra costs for disabled people, so we thought we’d explain it in a very clear way.

“The response we got today demonstrates that the government has absolutely no interest in even knowing what the right thing to do for disabled people is.”

Disability News Service asked the Treasury why it had not extended the uplift to those on legacy benefits, but it had not responded by noon today.

*People Before Profit, Homes For All, The People’s Assembly, Unite Community and the National Education Union’s disabled members’ committee