You are here: Home / Benefits and Poverty / Trust and charity deny DWP mental health links, after protesters march on jobcentre 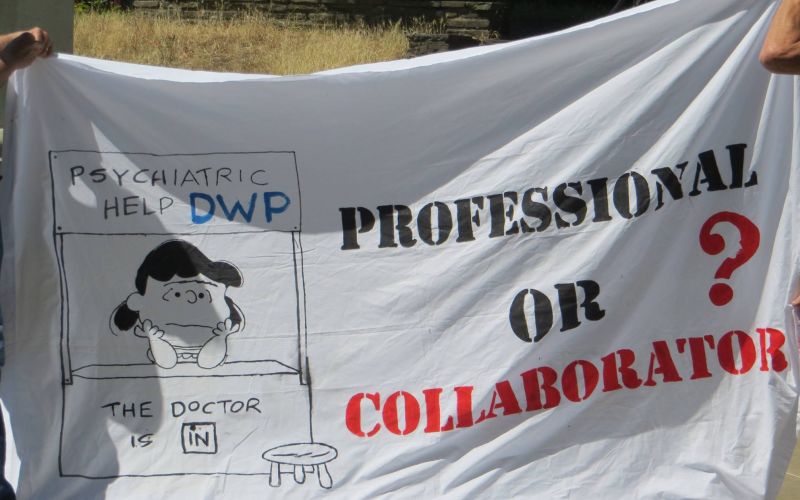 An NHS trust and a homelessness charity have failed to dispel concerns that a new centre for mental health services is closely linked to government plans to push people in mental distress off benefits.

Scores of protesters marched on a jobcentre in south London last week (26 June, pictured) to protest at plans to force people with mental health conditions to undergo psychological treatments in exchange for out-of-work benefits.

They were also protesting at the opening of a new “Living Well Hub” – providing access to community mental health services – on the third floor of the jobcentre building in Streatham, south London.

The march was organised by the Mental Health Resistance Network (MHRN), and was attended by other groups, including Psychologists Against Austerity, the Alliance for Counselling and Psychotherapy, and Disabled People Against Cuts.

The Department for Work and Pensions has reportedly denied that the Streatham jobcentre will be the first to pilot a project – announced in March’s budget – that will “co-locate” therapists from the NHS’s Improving Access to Psychological Therapies (IAPT) programme in more than 350 jobcentres, providing “integrated employment and mental health support to claimants with common mental health conditions”.

That denial came despite announcements by the department earlier this year that the first pilot would take place at the Streatham jobcentre.

Last week, South London and Maudsley NHS Foundation Trust (SLAM), speaking on behalf of the Lambeth Living Well Collaborative, told Disability News Service that there were “no plans for formal links between the Living Well Hub on the third floor and the jobcentre on the ground floor”.

But it has now emerged that a press release issued in March by the homelessness charity Thames Reach – part of the collaborative – described a visit by both work and pensions secretary Iain Duncan Smith and disabled people’s minister Mark Harper to the Living Well Hub “at its new home in the Streatham Job Centre”.

The charity said in the press release that the Hub “brings together” mental health staff, nurses, charity and council staff, and “Streatham Job Centre Plus staff”.

And a spokeswoman for one organisation said in the press release that the ministerial visit had “helped us highlight the benefits of co-production – where specialist mental health services operating alongside JCP staff are working together towards a common goal of improving health and well-being and helping people to get back to, or stay in, work”.

Both Thames Reach and SLAM have refused to comment on the inconsistencies in the statements.

Instead, they both passed on a new statement issued by the collaborative, which said: “We recognise that many people who use the Hub also need to use the Job Centre.

“As part of the arrangement we hope staff at the Hub will be able to deliver mental health awareness training for staff at the JCP, although this has not yet happened.”

The spokesman insisted that there were no official links between the Hub and the jobcentre, despite the press release issued by Thames Reach in March.

He added: “We will continue to be able to meet people in other venues including GP surgeries, their own homes and other suitable places as agreed.

“We recognise that the welfare reforms are proving very difficult for people with disabilities.

“We strongly believe we have a role and a responsibility to support people with mental health problems with the full range of challenges in their life whether that be housing, benefits or their physical and mental health.

“We believe we don’t have the option or luxury of ignoring these changes and that we need to ensure we are available to support people at the earliest opportunity.

“Clearly being located next to JCP gives us a good opportunity to do so. We offer a consent-based service which has been designed with people who use services.”

But an MHRN spokesman said: “It looks very fishy and we will be keeping a very close eye on them.

“If they collaborate with DWP in any way at all, we will be down on them like a tonne of bricks. If people collaborate, we will expose them.”

Although protesters were blocked from entering the jobcentre at last Friday’s protest, a group of eight activists were already inside the building, attending the hub’s official launch party.

They disrupted the party by sounding a siren and unveiling a banner from a third-floor window, which said: “Back To Work Therapy Is No Therapy At All.”

Denise McKenna, an MHRN member, told fellow protesters: “They think that a load of platitudes, a load of rubbish, can be fed to us and we will accept it.

Paula Peters, of Disabled People Against Cuts, said the use of forced treatment was “a clear abuse of our human rights”.

She added: “I have to tell you, Iain Duncan Smith: be afraid, be very afraid, because this week has been the first of many actions we will take against you.

“We are not going to give up the fight to make sure your services, your welfare reforms, are put to an end.”

Jonathan Bartley, the Green party’s work and pensions spokesman, told the protest that the pilot project and this week’s closure of the Independent Living Fund, were both “part of the government’s pernicious welfare cuts and welfare reforms”.

He said: “We have seen psychological elements to the welfare reforms of the last five years, but this crosses the line.

“I was speaking to a therapist just now who was saying it is not just counter-productive to put therapy in jobcentres, it is damaging. It is damaging, it is abusive and it is exploitative.

“Look at the Conservative party manifesto. It says absolutely clearly that if people refuse what the government consider to be appropriate healthcare, they want the right to review and to sanction those people, so don’t believe the government when they say this will not be coercive.

“This will be implicitly coercive and in the fullness of time it will be actually coercive because that is the way this government is heading.”