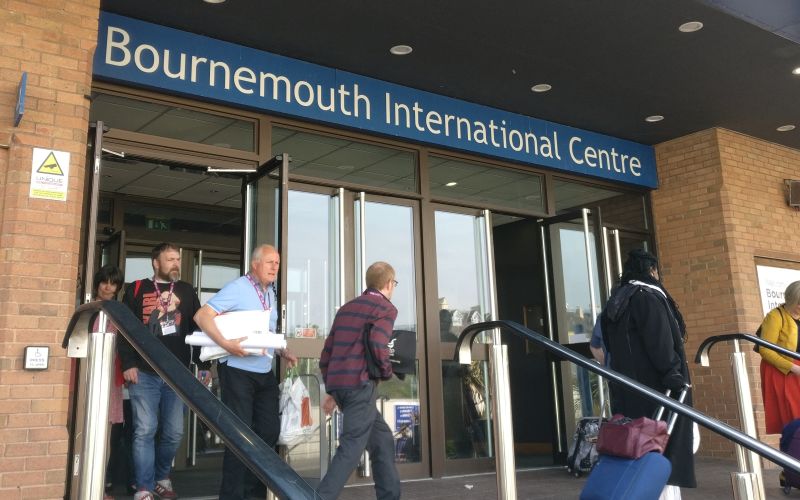 A series of speakers at the TUC Disabled Workers’ Conference in Bournemouth (pictured) – attended by disabled delegates from 22 unions – spoke of the damage caused by the rollout of universal credit (UC).

And after passing the motion to call for UC to be scrapped, the conference later voted for it to be the one motion to be debated by the wider trade union movement at September’s TUC Congress.

The motion mirrored the continuing “stop and scrap” campaign by Disabled People Against Cuts, which last month held a national day of action against universal credit, including an occupation of parliament’s central lobby and an attempt to interrupt prime minister’s questions.

Ceri Wright, from Unite, Britain’s biggest union, who proposed the motion in Bournemouth, said there was “a clear and direct link between universal credit and starvation”, with food bank referral rates more than double the national average in areas where there has been a full UC roll-out.

She said UC was “critically flawed from its outset” and any chance there might have been to “pause and reform” it “has long passed”.

Kirsty Lowe, from the USDAW union, supporting the motion, said: “We are told time and time again that the principles behind universal credit are sound: to make work pay and to simplify our social security system.

“This government has no interest in either. They have used UC as a vehicle to ship in further cuts: cuts to the work allowance, cuts to the disability premium and cuts to housing cost support.

“As for the second principle: this government’s approach to simplify social security is to remove it altogether.

Lisa Dempster, from the public service union Unison, spoke against scrapping UC, although she was highly critical of how it was operating.

She said the introduction of UC had already caused “huge hardship to disabled people” but there were advantages to having to make just one benefits application under the UC system, instead of several applications for the separate benefits it is replacing.

Despite those advantages, she said, the Conservative government had instead done “what they always do” and decided to “cut benefit levels and destroy the lives of disabled people”.

She said her members “recognise the benefits of having one system that brings benefits together” and “want the government to pause the roll-out” and reform UC.

But Unison asked for its amendment – which called for universal credit to be “fundamentally” reformed, with payments restored to previous levels, instead of being scrapped – not to be debated, after concerns had been expressed about it in advance of the debate by other unions.

The Unison amendment was instead remitted, which means it will be discussed later by the TUC disabled workers’ committee.

Janine Booth, co-chair of the disabled workers’ committee, said she was “disappointed” that Unison had made that decision, even though it had done so “in the interests of good relationships between unions”.

She said the conference allowed delegates to “put different views forward and we debate them out.

“Please don’t feel that you are going to fall out with anyone if you put forward a different point of view.”

She said she would “like to have had the debate” on the Unison amendment, even though she would have voted against it.

Mark Leopard, a delegate from PCS, the UK’s largest civil service trade union, said UC was “a disgraceful policy” and that many DWP staff had spoken out about it at the PCS conference earlier in the week.

Leopard told Disability News Service later that the PCS conference had seen delegate after delegate state their opposition to UC.

A motion to scrap UC was not passed at the PCS conference because another motion – to pause the rollout, reverse various social security cuts and improve the UC system – was passed instead, he said.

Leopard said: “The PCS position is we don’t want UC. It’s toxic. But we don’t want to go back to what we had before. That was just as toxic.

“We want a new, fair system, properly staffed by DWP to provide a fair service to all. We are definitely not for tweaking.

“Every speaker who came up was angry. The motion [at the PCS conference] was carried unanimously.

“It was very clear that UC is wrong, and it is impacting on not just disabled people but the low-paid and unemployed. The system is really hated throughout the civil service.”

Meanwhile, a new TUC report published to coincide with the conference says the disability pay gap has increased to its highest level since 2013.

TUC wants the government to consult on a new law that would force employers to publish their disability pay gaps – as they now have to do with gender pay gaps – and set out action plans to close them.