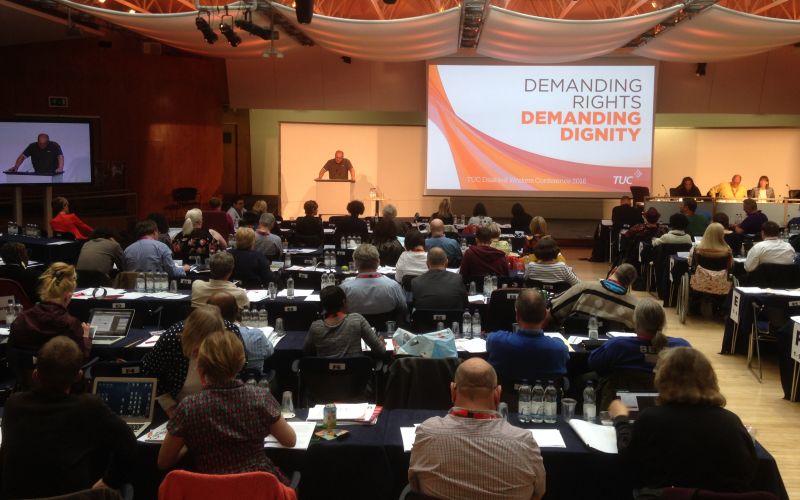 Four-fifths of disabled teachers face harassment and discrimination at the hands of head teachers and other senior managers, disabled union delegates have been told.

Members of the TUC Disabled Workers Conference (pictured) heard of the “growing evidence of increasing and blatant discrimination against disabled teachers”, not only through a failure to make reasonable adjustments but also by discriminating against them on pay and career progression.

Delegates were told that a survey carried out at last year’s consultation conference for disabled members of the NASUWT teachers’ union found 82 per cent had been harassed, bullied or discriminated against by head teachers, senior managers or deputy heads.

One disabled delegate, Rebecca*, told the conference that many school leaders were “vindictive” towards their disabled staff.

She said that one teacher announced that he was going to buy a mobility scooter to help him move around, but was told by his head teacher not to do so because it would look bad for the school.

Another disabled teacher, Catherine Scarlett, a delegate with the NUT teaching union, described the ordeal she had gone through at the hands of senior management at her school.

Scarlett described to Disability News Service (DNS) last month how after she became disabled she was told by one manager that if she had been a horse she would have been “taken out and shot”.

She told the conference that her experience demonstrated that there needed to be a body with “some proper teeth” to enforce the Equality Act, as employment tribunals were not equipped to deal with discrimination issues.

Scarlett said: “We need somebody to get in there quickly, enforce it and to be able to sort it out before people lose their jobs, before people are traumatised.”

She said: “If you have some kind of little weakness… they will scrutinise you… they will try and manage you out.”

“The more you hear, the more it’s a reality. It’s a different teaching union to Cath [Scarlett] but the same situation, you hear about it more and more.”

Her husband, an NASUWT area secretary, sees a huge number of cases of stress, anxiety and depression caused by “bullying, harassing managers”, she said.

And she said the rise in harassment and discrimination was because teachers were increasingly being held accountable for their pupils’ results.

She said: “Testing is everywhere, throughout the whole system. [Head teachers] are under pressure, so the only way they can manage is to bully staff.”

Rebecca said she had been forced to quit her own job 10 years ago after her head teacher had made her life “hell”.

She said: “He told me that if he had known I had a disability he wouldn’t have taken me on. He made my life hell for six years, so I empathise with Catherine.”

Although the pupils she taught secured superb GCSE results, and she worked long hours, none of that was taken into consideration by the head teacher, and she became so “worn down” that she experienced post-traumatic stress disorder and depression.

Another female teacher in the same school had cancer, and was criticised for taking too much time off work, while a third female teacher kept working during chemotherapy and was “throwing up in the toilet and going back and teaching” because she didn’t want management to know she was ill.

Rebecca resigned from her job because she couldn’t cope with going through a grievance procedure, and eventually became a supply teacher on a far lower income.

The conference was attended by 25 unions, from major organisations such as Unison, Unite and GMB, to smaller unions such as Equity, the Chartered Society of Physiotherapy and the senior civil servants’ union the FDA, with nearly 200 disabled delegates attending.

*She has asked not to be identified