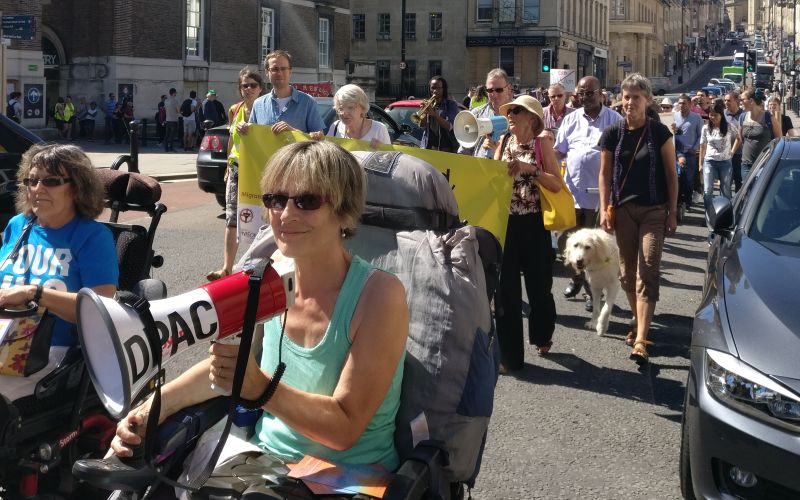 A UN human rights expert has been told that disabled asylum-seekers in Bristol have been evicted by social services, and have even been told that being made “street homeless” will make them more independent.

Professor Felipe González, the UN’s special rapporteur for the human rights of migrants, was told that disabled asylum-seekers are routinely denied access to services and support in the UK.

He was in Bristol last week for an unofficial visit organised by the University of Bristol’s Migration Mobilities Bristol research centre.

The centre wanted to tell him about the challenges faced by the UK and Bristol – such as the government’s “hostile environment” for immigrants and the impact of Brexit – and about the centre’s research, and to hear about his UN role.

Among those presenting González with evidence was Rebecca Yeo, a disabled academic, and herself the daughter of a refugee.

She was speaking on behalf of Janet Karanja, a disabled asylum-seeker, who had explained that she was too “pressed down” by the system to give evidence herself.

Yeo told González: “She had planned to talk about her struggle to survive, how at times she’s relied on friends for basic food, how her operation was cancelled just before entering the operating theatre when the hospital had a call from the Home Office.

“How she can make no plans because she doesn’t know when or whether, as she puts it, ‘the Home Office will come for you’.

“These struggles are common to asylum seekers and have a heavy toll on people’s physical and mental health.”

Karanja had told Yeo that the asylum system “makes you feel you are worthless… like garbage”, she said.

Yeo told the rapporteur that there was now greater recognition of the existence of disabled people in the asylum system, but the “systematic denial” of the rights and needs of all asylum-seekers has increased, which means “the asylum system itself is disabling”.

Yeo also told González that local and national government were breaching the UN Convention on the Rights of Persons with Disabilities in their treatment of disabled asylum-seekers, in Bristol and across the country.

She said: “I’m aware of disabled asylum seekers being evicted by social services, made street homeless, with no support, being told that this would make them more independent.”

She also told González that Bristol City Council had excluded disabled people from a task group set up to examine the barriers to accessing social care faced by asylum-seekers, with one councillor explaining: “People with lived experience know about their own lives, but don’t know about how the system works.”

The task group’s members are instead from the council and council-funded organisations.

The group was only set up by the council after a meeting organised by disabled people, including disabled asylum-seekers.

They had called for the meeting with the council and local charities and MPs following protests held last year (pictured) in the wake of the deaths of two disabled refugees, and showed them a film in which disabled asylum-seekers spoke of the barriers they faced in accessing social care.

Yeo told González that excluding disabled people and their organisations from the task group breached the UN Convention on the Rights of Persons with Disabilities and “cuts out a source of expertise”.

The rapporteur was visiting Bristol almost exactly a year after disabled asylum-seekers and activists came together to seek fundamental changes to systems and agencies after the brutal murders of the two disabled refugees.

Both Kamil Ahmad (in July 2016) and Bijan Ebrahimi (in July 2013) were murdered by racist neighbours after being failed by official agencies in the city.

The council was warned there would be a third death in the city unless there was urgent action to address the breaches of disabled asylum-seekers’ rights.

The council has failed so far to provide disabled activists with any information about what the task group has achieved or any minutes from its meetings, despite promising to do so by January this year.

A brief update on the task group’s progress was finally provided to Yeo yesterday (Wednesday), 24 hours after DNS had asked the council to comment on her evidence to the special rapporteur.

A Bristol City Council spokesperson said this morning in a statement: “As a City of Sanctuary our priority is to make Bristol a safe place for all people seeking sanctuary and to create an environment in which they can feel welcomed.

“Following the meeting with campaigners last year, a task group of key stakeholders that work with disabled asylum seekers was established to look at how their experience can be improved.

“The group is looking at a number of areas including a full audit of asylum related cases, improving education about completing a Care Act Assessment and arranging training sessions for operational staff to hear from disabled asylum seekers about their lived experiences.”