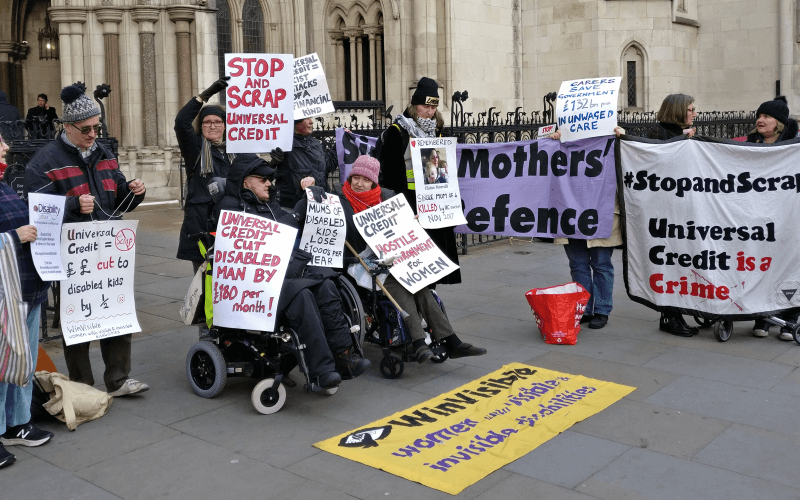 Disabled activists have protested outside the Royal Courts of Justice to draw attention to the continuing harm caused by universal credit, as the high court hears a legal challenge that aims to brand the government’s policy “irrational” and “discriminatory”.

Inside, barristers representing the Child Poverty Action Group (CPAG) in the judicial review were describing the severe financial impact of universal credit on a disabled woman and on a woman and her disabled daughter.

Only last week, Disability News Service reported how a disabled benefit claimant with high support needs who had lost more than £40 a week after having to transfer onto universal credit – forcing him into even greater poverty – had challenged the government to defend its reforms.

Outside the high court this week, one of the disabled campaigners, Paula Peters, said she was there to highlight the “horrendous discrimination around universal credit” which was seeing disabled people losing the support they need to live and to meet their care and access needs.

She said: “Our message to the government and to Labour as well is that we need to stop this from happening and we need to scrap this system and come together to design a social security system that supports people from cradle to grave and supports people to be fully included in society.

Another disabled protester, Claire Glasman, from WinVisible – which supports disabled women – said the government had known the “cruelty” of the impact universal credit would have before it began rolling it out across the country.

The move to universal credit was causing a “massive financial loss” to disabled children, carer mums and single disabled women, she said, all groups who “suffer the most from the tax and benefit cuts”.

She said she could not understand the mentality of government ministers who had introduced and were defending the changes.

She said: “They are treating those of us at the bottom as useless eaters. They have no interest in preserving our life. But we do.”

Glasman said there was now “massive opposition to UC” and the new work and pensions secretary Amber Rudd had already been forced to make some concessions.

She said: “I think the pressure is getting through.”

The first judicial review case being heard by the high court his week concerns a disabled woman who was forced to claim universal credit after DWP decided she was no longer eligible for personal independence payment and then stopped her employment and support allowance when she failed to attend a work capability assessment, despite her health deteriorating.

The move cost her more than £180 a month because the severe disability premium (SDP) that was part of the ESA system is not part of universal credit.

Although she later challenged the termination of both her PIP and her ESA, the law prevented her returning to ESA.

The second case concerns TD, a single mother with a disabled child, who gave up her job to become a full-time carer but had her income support terminated when her child’s disability living allowance (DLA) – and therefore also her carer’s allowance – was about to end and before it could be renewed.

She was also told by the jobcentre to claim universal credit, which she did.

The family is no longer financially worse off, because TD succeeded in having her daughter’s DLA award increased, which meant they received a more generous level of universal credit.

But despite DWP eventually admitting that there had been a mistake, for 18 months TD was receiving almost £140 a month less under universal credit than when she was receiving income support.

CPAG’s legal team is arguing that these policies are irrational, discriminatory and breach the Equality Act’s public sector equality duty.

Ministers have now introduced legislation preventing any further disabled people who receive SDP from moving on to universal credit ahead of the “managed migration” process, which – apart from a small pilot this summer – will not begin until next year.

No-one previously claiming SDP will receive a lower monthly payment when they move onto universal credit through managed migration, ministers have promised.

There will also eventually be compensation for those who have already moved onto universal credit and lost out because of SDP, but this will not fully compensate those with high support needs who are recognised as having limited capability for work-related activity.

This group are still set to be as much as £100 a month worse off under universal credit when the compensation is finally paid.

And there will be no compensation for the many thousands of new universal credit claimants who would have received higher payments under the previous system.

A DWP spokesperson said: “We are unable to comment on an ongoing legal case.

“Universal credit is a force for good and over 1.6 million are receiving the benefit successfully.”

Meanwhile, the Commons work and pensions committee has launched a new inquiry into “natural migration”, the process by which claimants move onto universal credit from existing benefits if their circumstances change, as happened to the people involved in the judicial review cases.