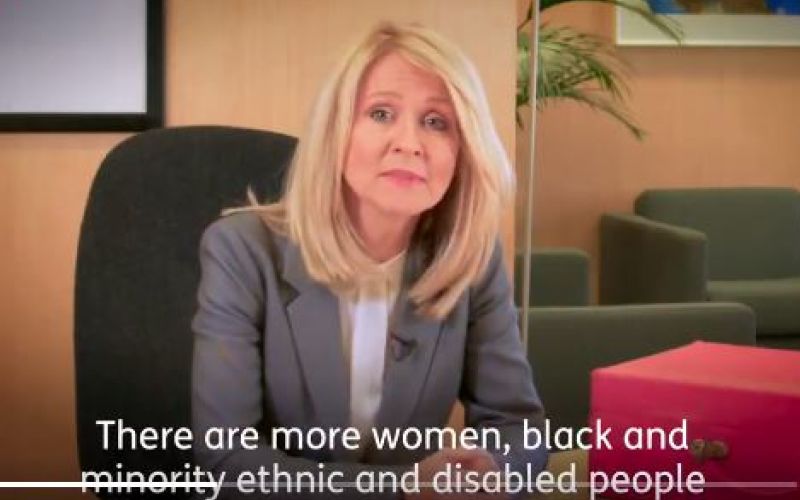 Work and pensions secretary Esther McVey has been caught making misleading claims on social media about the number of disabled people in work.

McVey had recorded a short video clip (pictured) welcoming this week’s new employment figures, and it was sent out on Tuesday by her department’s press office.

In the clip she welcomes the figures – for January to March 2018 – which she says are “great news”, before adding: “There are more women, black and minority ethnic and disabled people in employment too as we open up more opportunities for people of all backgrounds.”

But the figures from the Office for National Statistics (ONS) actually show that employment of disabled people fell by more than 20,000 between October-December 2017 and January-March 2018 – from 3,755,000 to 3,734,000 – according to the lead “Government Statistical Service harmonised standard definition of disability” measure.

An ONS document from 2016 makes it clear that the “Harmonised Standard Definition of disability is now the lead statistic for employment status of disabled people covering the UK”.

It is the first time disability employment figures have been published since August last year, following concerns raised by ONS about a “discontinuity” between figures from the second and third quarters of 2017.

When challenged about the secretary of state’s comments, a DWP spokeswoman said that McVey did not accept they were not correct.

She said McVey claimed she had been referring in the video to figures from April-June 2017, even though those statistics are now nearly a year out-of-date.

The DWP spokeswoman said McVey was comparing the April-June 2017 figures with those from April-June 2013, which showed a significant rise in disabled people in employment.

She said McVey had been referring to April-June 2017 figures because of the ONS concerns about the second and third quarters of 2017*.

“For her to suggest otherwise is just the latest example that the government fails to take the issue of employment for disabled people seriously.

“The disability employment gap has stubbornly remained at over 30 per cent over the previous eight years.

“If the government are serious about reducing the disability employment gap, it must provide real investment in education and training programmes and provide the necessary resources to schemes like Access to Work.”

An ONS spokesman initially claimed that it “publishes three current measures of disability in the labour market… but we do not specify a lead measure”.

But when Disability News Service drew attention to the 2016 document, another spokesman apologised for the ONS’s original “incorrect answer” and confirmed that the harmonised standard definition was the lead measure on disability employment.

He said ONS had not been in touch with DWP about McVey’s comments and had just made a “mistake”.

But he refused to comment on McVey’s video claims.

McVey was repeatedly caught using figures to make misleading claims during her time as minister for disabled people from 2012 to 2013.

In March 2013, she was shamed – but refused to apologise – after misleading MPs about the impact of the bedroom tax on families with disabled children or disabled people who had family members as carers.

The following month, McVey was accused of using misleading government statistics to “stoke up antagonism” towards disabled benefit claimants, when she told the Mail on Sunday that disability living allowance (DLA) claims had shot up ahead of the introduction of personal independence payment (PIP).

The newspaper had described this as “an extraordinary ‘closing-down sale’ effect, with rocketing claims as people rush to get their hands on unchecked ‘welfare for life’”, a description a DWP spokeswoman later said was a fair representation of her interview although she had not used the exact phrases “closing-down sale” or “welfare for life”.

Analysis of the figures used by McVey to justify the claim showed that the number of DLA claimants aged 16-64 – the group who would be affected by the introduction of PIP – had actually fallen by more than 1,600 in the three months she was referring to.

In August 2013, McVey refused to apologise after she was caught again “pulling lies and false information out of thin air” in a bid to justify her government’s cuts to spending on disability benefits and services.

She had claimed that the UK was spending “almost double the OECD average” on disabled people, a claim that was shown to be wrong by OECD statisticians.

Two months later, she was facing yet more claims of using misleading statistics, this time after she tried to show MPs that her policies were not damaging inclusion and equality for disabled people, after she misreported both the results of an international report on the implementation of the UN disability convention and her own department’s research on disability equality.

*The ONS warning suggests only that caution should be taken when comparing April-June 2017 with subsequent time periods. It makes no warning about comparing the latest two quarters.