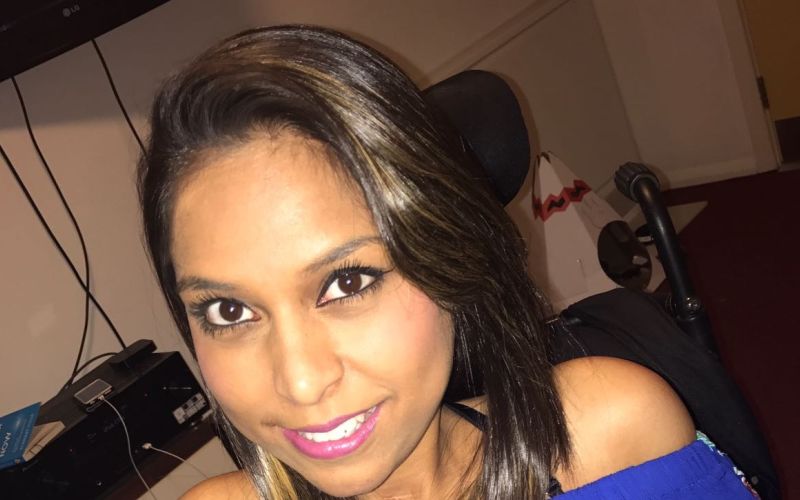 A young disabled woman was told that she had been evicted from her residential home while she lay critically ill in hospital.

The care home in Barking, east London, run by the company Sahara Care, had originally issued the eviction notice to Lakhvinder Kaur (pictured) in a letter on 6 April, just days after she had made an allegation of physical abuse against a member of staff at the home.

In the same letter in which the company told her that it had referred her abuse allegation to the care watchdog, the local council and the police, it also told her that it was giving her 28 days’ notice to leave the home, Sahara Parkside.

Several weeks later, Kaur, who has spinal muscular atrophy, was rushed to hospital with blood poisoning.

Just days after she was admitted, on 28 May, and while still fighting for her life, the care company told her she would not be allowed to return to Sahara Parkside when she was released from hospital.

Kaur has been trying since last year to find accessible accommodation that will allow her to live independently and safely with the support she needs.

And because her local authority Newham council has not been able to find somewhere safe and appropriate for her to live, the hospital that treated her has itself told the council that it needs to evict her because she has now recovered from the blood poisoning.

She told the council in an email: “My current situation worries me because each time I am admitted to ICU [the intensive care unit] my chance of recovery is reduced and increases my risk of death.

“This risk could be better managed if my housing and care package was addressed.”

She also told her social worker: “I believe I have valid reasons to express my deep and worrying concerns about my hospital discharge particularly when there is so much uncertainty and unknowns around my housing and support package.”

She has now been told that she will have to move temporarily into a hotel room when she leaves hospital.

Her case highlights once again the drastic shortage of accessible housing across the country.

The Equality and Human Rights Commission said only last month that disabled people had been left “demoralised and frustrated” by the housing system and faced a “chronic shortage” of accessible homes.

Kaur has been trying to persuade the council that she needs a two-bed flat to provide the space she needs to comply with employment law for her personal assistants, and to ensure her own health and safety, as well as her need for privacy, and space to store vital medication and equipment.

She believes that the continuing struggle to ensure the support she needed at Sahara Parkside contributed to the illness that left her in intensive care.

A spokeswoman for Newham council said: “We are working to find an interim property for Laki to move in to when she is discharged from hospital so Laki can get the support she needs. This is whilst we find her a permanent home.”

She said the council “recognises there is a chronic shortage of housing across the country”.

But when asked if the council accepted that the continuing failure to find her accessible housing and provide the support she needs were breaches of her rights under article six (on disabled women) and article 19 (on independent living) of the UN Convention on the Rights of Persons with Disabilities, the spokeswoman denied that the council “has any direct responsibility for the implementation of any of the rights” under the convention.

She said: “Even if it did have such responsibilities, in its view there have been no breaches by the council of articles 6 or 19.

“The issue in this case is the shortage of properties, particularly in London.”

She added: “The borough in which the safeguarding issue arose investigates the complaint.

“As Sahara Homes is based in Barking and Dagenham, it would be for that local authority to carry out the investigation. Newham is chasing for the outcome of this investigation.”

Kaur has been trying for eight years to secure a proper care package that will keep her safe, and allow her to live in her own home, manage her own support, and enjoy the typical social life of a woman in her 20s.

Instead, she has had to move from one inappropriate care home and supported living setting to another.

Last November, Disability News Service reported how she had been left been unable to leave Sahara Parkside for nearly three weeks because its managers were trying to evict her for complaining about her care, and for her attempts to enjoy a proper social life.

Managers at the home even threatened to change the security code on the entrance if she left the building, and they tried twice – unsuccessfully – to persuade the police to evict her.

Sahara said this week that it could not discuss individual cases.