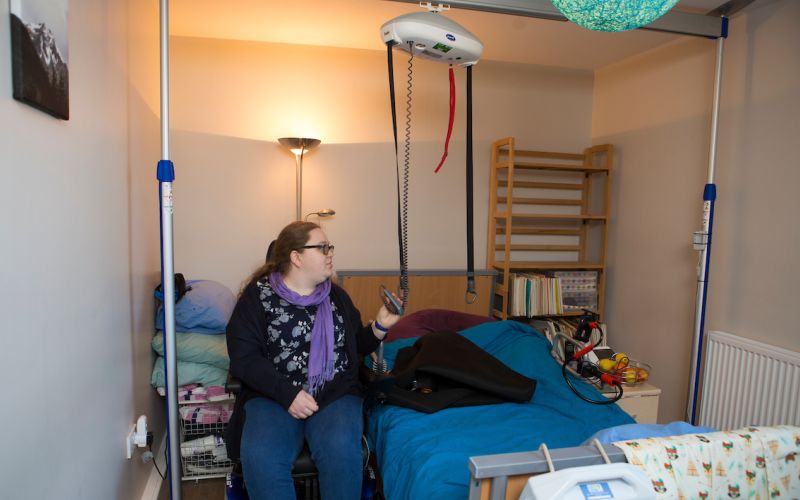 Disabled people have been left “demoralised and frustrated” by the housing system and face a “chronic shortage” of accessible homes, according to a new report by the equality and human rights watchdog.

More than 350,000 disabled people in England have unmet housing needs, with one-third of those in rented accommodation living in unsuitable properties, says the report.

There are also about 17,000 wheelchair-users in Scotland with unmet housing needs, while there is “a severe shortage” of accessible and wheelchair-accessible housing in Wales.

The report by the Equality and Human Rights Commission (EHRC) follows an 18-month formal inquiry and calls on the government to draw up a national strategy to ensure an adequate supply of new homes built to inclusive design standards.

The report – Housing and disabled people: Britain’s hidden crisis – also says there is “unacceptable bureaucracy and delay” in the system of installing home adaptations.

EHRC published separate reports on the crisis in housing for disabled people in both Scotland and Wales.

The report on Britain warns of “insufficient attention given to those currently in residential care who wish to live independently and could do so with the right support”.

And it says that provision of advice, support and advocacy is “patchy”, with disabled people reporting that they have nowhere to turn when in crisis or when their housing is unsuitable, while navigating the complex systems for allocating housing and securing adaptations is “stressful and challenging”.

It concludes: “Progress to ensure that disabled people have accessible homes that support their right to independent living is unlikely to be made unless disabled people are actively engaged in shaping housing policy and practice.”

And it adds: “The human and economic costs of inaccessible housing can be avoided if disabled people’s requirements are identified and built into planning and delivery of new housing supply.”

The inquiry heard accounts of disabled people eating, sleeping and bathing in one room, and of having to be carried around their inaccessible homes by relatives.

One disabled person who contributed to the inquiry said they had not been outside their second-floor flat since 2011 – apart from essential hospital trips – because there was no lift and the flat was not wheelchair-accessible.

A second respondent to the inquiry’s call for evidence described how they were unable to access their children’s room and other parts of the house and could not use their wheelchair because their home was so inaccessible.

And one disabled respondent said: “I have been on my local authority [housing] list for seven years, but there has never been a suitable property available in that time.

“So for the past two years I have been reduced to having my hair washed in a bowl while sat on my toilet.”

The report says that while more than two-thirds of local authorities say that developers do not always comply with accessibility requirements, only seven local authorities (three per cent) have taken action against a developer in the last three years.

In addition to the demand for a national strategy, the report calls on the UK government to produce mandatory planning guidance for local authorities on assessing need and delivering accessible and adaptable housing, and wheelchair-accessible housing.

And it says the government should amend building regulations so that the optional M4(2) accessibility standard – a series of design criteria intended to make homes more easily adaptable for lifetime use – is instead a mandatory minimum standard for all new housing.

Government figures show this would increase construction costs by just £1,100 per home.

It also says the UK, Scottish and Welsh governments should all require local authorities to ensure a minimum of 10 per cent of new-build homes are built to higher wheelchair-accessible standards.

And it says the three governments should provide funding to disabled people’s organisations and advice agencies so they can increase provision of independent advice and information on housing.

The report welcomes the UK government’s decision to increase funding for disabled facilities grants (DFGs) from £220 million in 2015-16 to £505 million in 2019-20 and incorporate the funding into a joint health and social care budget, the Better Care Fund, with the aim of doubling the number of grants to 85,000 by 2020.

But the report adds: “The increase in funding is an important step, but we heard evidence that the slow and cumbersome nature of the DFG process often leads to people spending extended periods in hospital beyond their discharge date or being discharged into unsuitable accommodation.”

EHRC says its findings “raise alarming concerns that disabled people’s right to independent living is being heavily restricted by unsuitable and unsafe housing”.

CRPD warned that austerity measures had “hindered the advancement of accessibility” and raised concerns about “the reduction in social protection schemes related to housing, household income and budgets for independent living”.

Kamran Mallick, chief executive of Disability Rights UK, said: “This research shows some of the fundamental issues we face on a day-to-day basis.

“Appropriate housing is key to independent living and creating choice and control for disabled people.

“The same is true if we develop ways to ensure the swift provision of aids and adaptations when people become disabled.

“We need clear standards for developers and designers so we begin to see the establishment of more lifetime homes; and better policing and support for private landlords, who have a huge slice of the rental market.”

Heather Fisken, manager of Independent Living in Scotland, which is part of Inclusion Scotland, said: “This is indeed a hidden crisis. Disabled people living in unsuitable housing are denied their human rights to participate in and contribute to their communities.

“Living in inaccessible housing can mean not getting outside at all or only rarely, or even being forced to move to a care home.

“The EHRC’s recommendations echo Inclusion Scotland’s own report Our Place, Our Space which called on Scottish government to introduce a national target for new build houses built to wheelchair accessible standards, and for a new accessible housing design standard.

“Without urgent policy change and investment, the situation is set to get worse as the population ages and housing stocks depreciate.”

A Disability Wales spokesperson said: “There are far too many examples where disabled people are unable to move around their own home due to its inaccessibility.

“This is having a huge impact on disabled people’s health and well-being, their ability to engage in community life and access employment.

“Having a suitable place to live is a basic need and a human right.”

The EHRC reports come less than two months after the government rejected a series of recommendations made by the Commons women and equalities committee, following its inquiry on disability and the built environment.

Maria Miller, the Tory MP who chairs that committee, said the government’s decision to reject those recommendations had left disabled people to face “unacceptable barriers to independent living, often making them feel isolated and forgotten”.

She said: “I welcome the findings of this inquiry and hope that it will act as another much-needed wake up call for ministers.”

A spokesman for the Ministry of Housing Communities and Local Government said: “We realise many disabled people can face a variety of obstacles in their daily lives, but we’re clear that their homes should not be one of these.

“That’s why we’re providing councils with almost £1 billion over the next two years to adapt properties for disabled people so they can live independently and safely.

“Our planning rules make clear councils must take the needs of elderly and disabled people into account when planning new homes in their area.”