You are here: Home / Activism and Campaigning / Activists set for ‘David and Goliath’ fight to defeat assisted suicide court bid 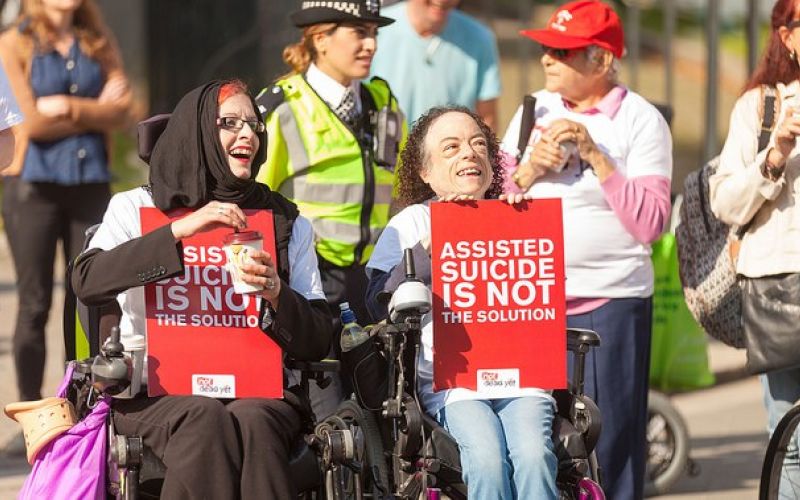 A group of disabled activists – led by a crossbench peer – are to intervene in a legal case for the first time next week, in a bid to persuade three high court judges not to weaken the law to allow assisted suicide.

Not Dead Yet UK (NDY UK), a campaign group of disabled people opposed to a change in the law on assisted suicide, has been granted the right to intervene in the high-profile judicial review being taken by Noel Conway, who is terminally-ill.

Conway is taking a case against the Ministry of Justice, and wants the court to find that the Suicide Act – which makes it illegal to assist someone to take their own life – is incompatible with articles eight (on the right to a private and family life) and 14 (which prohibits discrimination) of the European Convention on Human Rights.

NDY UK, led by its founder, the disabled peer Baroness [Jane] Campbell, had just 10 days to put together its legal submission to the high court, after being granted permission to intervene in the case, but even then was only allowed to submit 20 pages of legal arguments.

It is now hoping the three high court judges hearing the case will also allow NDY UK to submit a witness statement from Baroness Campbell herself, and permit NDY UK’s barrister, Catherine Casserley, of Cloisters chambers, to respond to the arguments of Conway’s legal team in court.

If NDY UK wins the right to be heard orally in court, it could even risk bankruptcy if Conway wins his case and the judges make an order that the campaign group should pay some of his lawyers’ costs.

Baroness Campbell and her members were only able to secure their status as interveners in the case because their two lawyers, Casserley and solicitor Chris Fry, of Fry Law, offered to work pro bono.

Although they are on the same side as the Ministry of Justice, which is also fighting a change in the law, they are facing a well-funded team from solicitors Irwin Mitchell, backed by the substantial financial resources of the campaign group Dignity in Dying, formerly known as the Voluntary Euthanasia Society.

“It always tends to be those organisations not run and controlled by disabled people that get the cash. That does stick in the throat a bit.

“Whether you agree with assisted suicide, you should have a balanced opportunity to hear both views and I fear the [judges are] in jeopardy of not hearing all the views which [they need] to hear in order to make a good judgement.”

It is the first time NDY UK has intervened in a legal case on assisted suicide in the 12 years since it was founded by Baroness Campbell.

Their case has relied on disabled activists from NDY UK, the pro bono work of Fry and Casserley, and support from its sister organisation in the USA, Not Dead Yet, and its president and founder, Diane Coleman, as well as law students from both the University of Sheffield and Sheffield Hallam University.

Conway argues that the current law prevents him exercising his right to choice and control over his death.

He said earlier this year: “I know I am going to die anyway, but how and when should be up to me.

“To have the option of an assisted death in this country would provide me with great reassurance and comfort.

“It would allow me to decide when I am ready to go, rather than be forced into a premature death by travelling abroad or be left at the mercy of a cruel illness.”

But Baroness Campbell, who plans to attend court for the first day of the judicial review on Monday (17 July), said the prospect of a change in the law was “terrifying”, which was why she and fellow activists had decided that NDY UK must intervene in the court case.

In the witness statement – which may not be accepted by the court – Baroness Campbell says that any ruling in favour of Conway would “impact negatively on the lives of other terminally ill and disabled people”.

She says it would “damage beyond repair the way in which society views the elderly, sick and disabled to the point where the Equality Act itself and the protection which it provides becomes fundamentally defective”.

She adds: “I (and the hundreds of disabled and terminally ill members of NDY UK), want people to understand that it is perfectly possible to have a fulfilling and enjoyable life whilst living with a substantial, progressive condition.”

She hopes to tell the court that continuing cuts to health and care services would mean that disabled and terminally-ill people “may become more inclined towards considering desperate options such as assisted suicide”, if it was legalised.

The writer and activist Penny Pepper, another NDY UK member, who is quoted in Baroness Campbell’s witness statement, says: “The massive publicity machine working for those who promote assisted suicide drowns out the ‘small voices’ of disabled people who want support to live, not die.”

Another member, Felicity Wright, warns that legalisation would destroy the doctor-patient relationship, and that doctors are “amongst the very last people I would trust to have a balanced opinion about the quality of my life”.

Baroness Campbell, whose own impairment, spinal muscular atrophy, leaves her in a similar physical situation to Conway, who has motor neurone disease, says she identifies with and understands his fears of the possible death he might face due to an eventual “physical shutdown”.

But she says that “parliament has concluded that legalisation would be ‘a dangerous and inappropriate way to tackle end of life fears’”*.

She adds: “In every country where assisted suicide has been made legal, original safeguards have been watered down, allowing the parameters to widen and include people that were outside of the original legislation.

“There is no reason that this would not happen in the UK, and frankly I predict it will.”

Fry, who worked with fellow discrimination law expert Casserley on another high-profile disability rights case, which saw their client Doug Paulley win a ground-breaking legal victory that protected the rights of wheelchair-users to travel on buses, said he felt an “overwhelming sense of responsibility” about the case.

He said he had been involved in other high-profile cases which have changed the law – including Paulley’s – but “this is the one that carries for me the greatest sense of personal responsibility because ultimately the issues being decided in this case will affect almost everybody in today’s society”.

He said a change in the law would have a “multi-layered impact across the whole of society” and would undermine the Equality Act, which is “founded on the concept that we should do more to empower people and to give an effective right to life and a right to an engaged, fulfilling and accessible and inclusive life.

“If you suddenly start saying it’s about the right to die and start unravelling it all, you’re unravelling a quarter of a century of positive equality legislation and case law.

“This, for me, is probably the biggest case I will be involved in in my career, because of the significant responsibility that comes with trying to ensure the voices of disabled people are heard as part of this judicial process.”

He said there was a “serious threat” that Conway could win, as Dignity in Dying and its lawyers had spent a “significant amount of time and money” in preparing their case since the last attempts to change the law, on behalf of Tony Nicklinson and two other disabled men, ended in failure at the Supreme Court three years ago.

Fry said: “This poses a real threat that the law will be changed. If we lose this case and subsequently it gets as far as the Supreme Court and the Supreme Court decides that assisted dying should be legal, that’s it.”

In her legal submission to the court on behalf of NDY UK, Casserley warns that the court is being asked to create “a climate in which a disabled person is seen as a burden and the option of a course which involves termination of life becomes routine”.

She asks the court to consider not only Conway’s rights, but those of the other disabled and terminally ill people “who will be potentially affected adversely by the Court’s decision and the message that this conveys to them”.

She adds: “NDYUK has significant concerns that if society indicates that as a disabled or terminally ill person assisted dying is an option open to them there is a risk of application of internal pressure derived from a value system which views disability negatively.”

*Nearly two years ago, the latest attempt to change the law in parliament was heavily defeated, with MPs voting 330 to 118 against a private members’ bill put forward by Labour MP Rob Marris that would have legalised assisted suicide for people said to have up to six months to live.