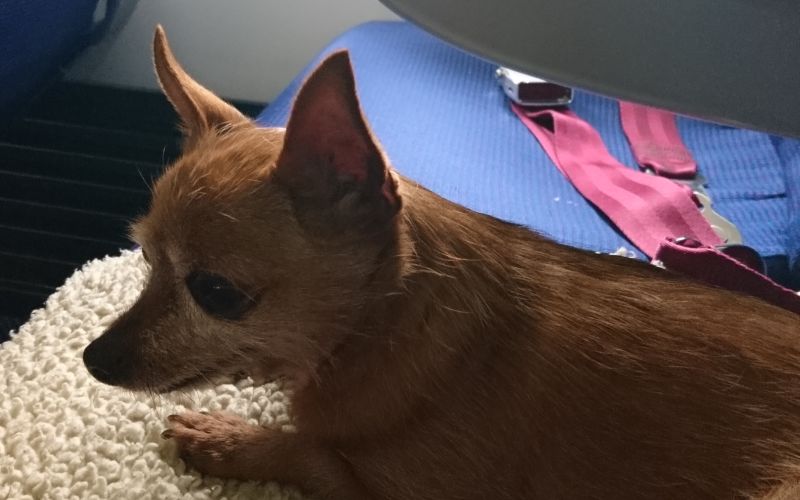 The aviation regulator is being forced to change guidance that appears to discriminate against many disabled people who want to take their assistance dogs with them on commercial flights.

But CIEH insists that it has no remit to endorse assistance dogs and says it has repeatedly asked CAA to remove this reference from the safety notice.

Now, following concerns raised by disabled campaigner Mark Lucas, CAA has said the guidance is likely to be withdrawn.

Lucas, from Stoke-on-Trent, had sent a letter warning CAA that he believes the guidance was discriminating against him as a disabled person.

He says the guidance has made it harder for him to persuade airlines to allow his assistance dog Betty (pictured) – who he has trained himself – to accompany him on flights from the UK.

He has been told by CIEH: “We have written on numerous occasions to CAA asking them to remove all references to us from their safety notices but they have never responded.”

Betty assists Lucas with his mental health – reducing the stress that can cause an epileptic seizure – but because she has not been trained by an organisation that is a member of Assistance Dogs International or the International Guide Dog Federation, airlines refuse to allow Betty to accompany him on flights from the UK as an assistance dog.

He believes airlines and CAA are doing everything they can to prevent dogs like Betty being treated as assistance dogs.

He argues that only a tiny percentage of the disabled people who could benefit from assistance dogs have animals trained by the big charities like Guide Dogs.

The guide states that assistance dogs “can also be owner trained” and says that the law “does not require the dog to wear a harness or jacket to identify it as an assistance dog”.

Lucas believes that this guidance means “the time is up” on the discrimination he and others are facing and shows that owner-trained dogs can be treated as assistance dogs under the Equality Act.

He said: “The way they have interpreted the act means the Equality Act is on my side.”

But even if CAA removes the discriminatory guidance, Lucas believes he will only persuade the industry to change its rules by taking a court case against an airline.

Other campaigners are also pushing for change.

Esme Brenton, founder of Sherlock Hounds Assistance Dogs (SHAD), which works with owner-trained assistance dogs, said: “I would like to see a change in the attitude the airline industry have towards assistance dogs in general.”

She added: “As long as the dog is under control, does not cause any issues in public and provides a direct benefit to their handler’s disabilities they should be able to accompany their handler.”

Like Lucas, she believes the problems lie within the airline industry in the UK, rather than in other European countries, where assistance dogs like Betty are accepted.

She said: “After talking to a few people it appears that the issue lies within the UK.

“Although expensive, some would rather travel by other means to Europe to then get a flight from Europe to their desired destination.

“There is also no problem getting back into the UK when boarding from other countries.

“Sadly this can lead to people coming to this country for a holiday and when trying to go back they can find themselves stranded in the UK.”

Although SHAD runs its own assessment scheme for owner-trained assistance dogs, Brenton believes that all dogs should be accepted as assistance dogs “as long as the dog is under control and does not cause any issues to the public and provides a direct benefit to their handler’s disabilities”.

She said: “I don’t agree [with] ‘one size fits all’. This way of thinking simply puts barriers up.

“While organisations like mine work for some, it doesn’t for others. Everyone should be given a choice of how to train.

“The only difficulty comes from a small minority of people abusing the system.”

She added: “A great deal of disabled people benefit a great deal from having an assistance dog.

“Sadly, the numbers of those in need outweigh the limited resources and spaces [available from] the main organisations such as Guide Dogs and all those under the umbrella of Assistance Dogs UK.

“This leaves many having to take on the challenge and commitment of training their own dog.”

A CAA spokesman said the safety notice was “currently under review and will likely be withdrawn soon. We will be contacting [CIEH] directly to discuss.”