You are here: Home / Activism and Campaigning / Anger over Royal Society’s ‘love fest for euthanasia’ conference 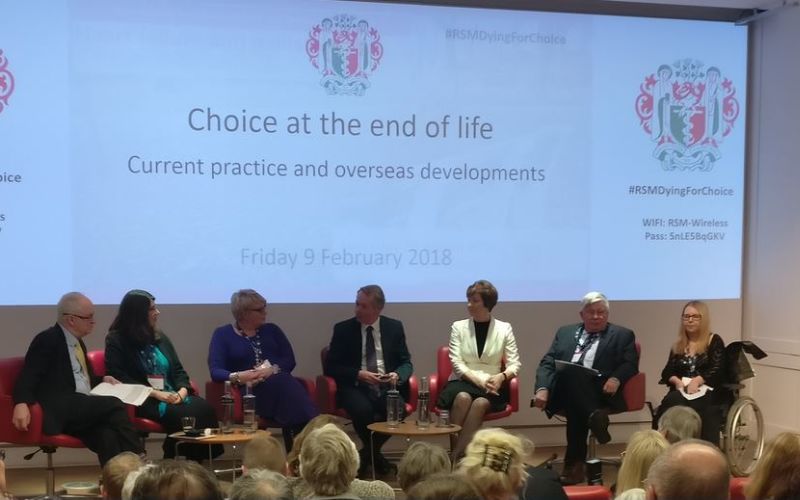 Disabled activists have attacked the Royal Society of Medicine (RSM) for hosting a conference on “choice at the end of life” that was little more than a “love fest for euthanasia”.

RSM said before the event that the conference would “question whether or not assisted dying is complementary or contradictory to the notion of person-centred care”.

But speakers in favour of legalising assisted suicide far outnumbered those who opposed a change in the law.

One of those behind the conference, Professor Roger Kirby, who chairs RSM’s academic board, told the audience that the idea for organising it came to him after reading an article written by the husband of a terminally-ill woman who travelled to the Dignitas clinic in Switzerland to take her own life.

The other senior medical figure who helped organise the event, he said, was Professor Gillian Leng, deputy chief executive of the National Institute for Health and Care Excellence (NICE), whose terminally-ill husband, Professor Paul Cosford, told the conference that he was in favour of a change in the law*.

Professor Cosford, who has incurable cancer, and is patient and medical director for Public Health England, suggested that having choice at the end of life should include the option of an assisted suicide.

He told the conference: “I cannot predict how I will die but I can focus on living well now if I know that I would have some kind of control at the time if I need it.”

He added: “To enable choice at the end of life, taking account of individual care needs, may well need a change in approach.

“I do think that might include [the option of] assisted dying.”

He was followed by two further speakers who were in favour of legalisation: Tony Wicks, whose wife ended her life at Dignitas; and Julie Smith, whose husband had been prevented from travelling to Switzerland to end his life at the clinic.

The first three speakers were all supportive of legalising assisted suicide, while the fourth, an assistant coroner, expressed no opinion.

The next speaker was Dr Catherine Sonquist Forest, a strong advocate of legalisation, who takes part in the practice of assisted suicide in California – where it is called “medical aid-in-dying” – where it was legalised in June 2016.

The conference did not hear from an opponent of legalisation until the sixth speaker, Juliet Marlow (pictured, far right), from Not Dead Yet UK (NDY UK), who had only been added to the list of speakers after NDY UK raised concerns at not being invited to speak at the event.

She told the conference that legalised assisted suicide would “negatively affect the relationship between disabled people and society”, and she warned of the risk of people being “slowly” coerced into agreeing to an assisted suicide.

She said there was not one user-led disabled people’s organisation that supported legalising assisted suicide.

Instead of legalisation, she said, “we need to call for better funded social care and palliative care; that’s what makes the difference between a good life and a bad life for disabled people and that is being slowly eroded by the current administration”.

The later sessions of the conference were less unbalanced, although still tilted towards those in favour of a change in the law.

Throughout the conference, there were frequent loud rounds of applause for speakers who called for a change in the law, while more than 30 people linked to the pro-assisted suicide organisation Dignity in Dying were on the list of conference attendees.

The conference in central London came just a day after the British Medical Journal (BMJ) again called for the law to be changed.

Marlow said after the conference that she felt that it had been organised to push the case for legalisation among the medical profession.

She said: “I felt very outnumbered, and I think the people attending had made up their minds already, and everything they are hearing is just confirming what they already believe.

“I am open to honest discussion with people about this, as is everyone in NDY UK, but I don’t think we are going to achieve anything by being here, sadly.”

She said she felt like “a token disabled person” at the conference, and she added: “I am only here because I asked to be here.”

Nikki Kenward, director of Distant Voices, another user-led campaign group which opposes euthanasia and assisted suicide, said the conference had been “like a love fest for euthanasia”.

She said she could not believe how tilted the conference had been in favour of those who wanted the law changed.

Kenward, who had spoken briefly from the audience during the event, said: “I don’t know how they got away with it.

“The decision by an organisation with the prominence of the RSM to effectively endorse the work of Dignity in Dying in hosting this biased conference is outrageous, naive and fundamentally insulting to disabled people.”

She said it “would have been more honest if the RSM had offered tickets to euthanasia supporters only instead of paying lip service to the opposing view”.

She added: “You cannot effectively endorse the idea that euthanasia is a positive outcome to combatting terminal illness and disability without expecting those who live lives worth living not to react with anger and disdain.

“Disabled people will not allow such endorsements to go unchallenged.”

Roger Symes, an NDY UK member who attended the conference, has complained to RSM over what he believes was a “deliberately biased” event that was “unworthy of the RSM”.

Symes, who is married to the disabled crossbench peer and NDY UK co-founder Baroness [Jane] Campbell, told DNS that he was “alarmed by the bias displayed at the RSM event”.

He said: “I think it shows that NDY UK was right to express concern beforehand. Our presence was clearly resented.

“Going to the RSM I expected a high level of rigour to the debate, but it was only when Baroness Finlay [a professor of palliative medicine, and opponent of legalisation] spoke that I appreciated how much that had been missing from the rest of the day.

“She quoted numerous references to published studies, something which was almost entirely missing from most of the other medical presentations.

“I can only think that RSM was duped into believing that everyone is ‘DyingForChoice’ (as per their hashtag) and that jumping on the bandwagon was the right thing to do.

“Making the ‘choice’ of assisted suicide only available to terminally-ill and disabled people is discrimination.

“It is saying that whilst society will continue to strive to prevent suicides in the rest of the population, it is willing to collude in the suicides of terminally-ill and disabled people.”

An RSM spokeswoman refused to say if the organisation accepted that the conference was biased in favour of legalisation, and whether it should apologise.

But she said in a statement: “The RSM team worked extremely hard to provide an environment where different points of view could be voiced and listened to.

“While providing a forum for discussion of the important issues surrounding end of life care, the RSM remains firmly committed to its independence.

“The society does not and will not campaign for a change in the law on assisted suicide.

“Note that we do not check the views of delegates before we offer them a place. RSM events are open to all who want to book a place and bookings are carried out on a strictly ‘first come, first served’ basis.

“All delegates to RSM meetings are invited to give feedback. This allows us to evaluate our events and learn from our delegates’ experience.

“We will feed our learning about Friday’s event into programme development and the chairing of sessions for future meetings of this type.”

*Professor Cosford has asked DNS to point out that although his comments at the conference may have given the impression that he supports a change in the law, in fact he is undecided on the issue. He feels that reducing the issue to simply being one between whether the law should change misses the deeper point that we all need to face up to our own mortality and consider how we ensure a genuinely personal approach to health care at the end of life.