You are here: Home / Activism and Campaigning / Anti-protest laws are an attempt to silence us… and we must resist, say disabled activists 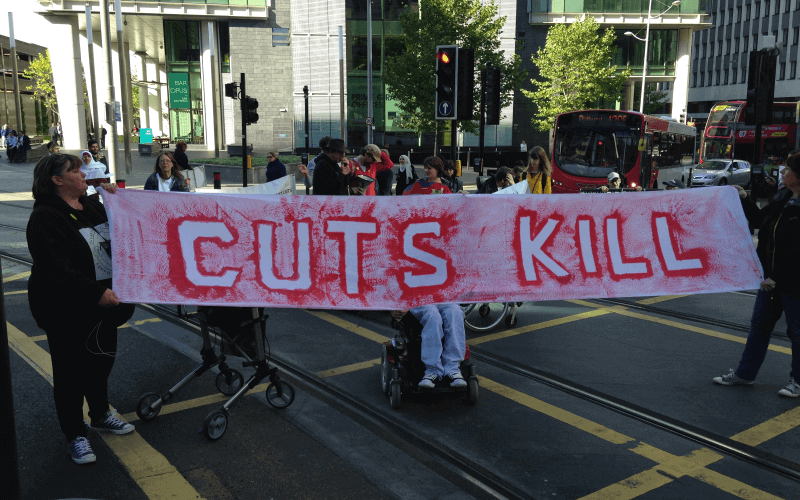 Proposed new anti-protest laws pose a threat to free speech and are an attempt to silence and control protesters, disabled activists have warned.

Disabled people who have taken part in protests organised by Disabled People Against Cuts (DPAC) and the Extinction Rebellion climate change movement spoke out this week after the government published its new police, crime, sentencing and courts bill.

The 307-page bill, which began its progress through parliament this week, with MPs voting in favour of the draft legislation at its second reading, includes measures that have been branded an attack on the right to protest.

Among the many parts of the bill to have already caused alarm is section 59, which would impose a prison sentence of up to 10 years on protesters whose actions put a person at risk of “serious annoyance” or “serious inconvenience”.

Disabled activists fear that many of the anti-austerity and climate change demonstrations and direct action they have taken part in over the last decade would now see them being convicted and even imprisoned.

Bob Williams-Findlay, who took part in the major Extinction Rebellion protests in London in October 2019 as part of the XR Disabled Rebels group, and in many DPAC actions, said the bill was “without doubt one of the most authoritarian pieces of legislation to go before parliament”.

He said: “It is a threat to democratic process, free speech and our right to defend ourselves and our planet.

“Disabled and nondisabled people alike must unite in opposition to this attempt to silence and control us.”

He said XR Disabled Rebels had experienced a “foretaste of this iron fist policing” in 2019, while DPAC has also experienced “heavy-handed tactics”.

He said: “Of course these measures are seeking to deter us, frighten us and criminalise us, but we will not cower, allow bullies to disable or curtail human rights.

“We will not go quietly into the night; we will roar like lions, take to the streets again when possible to resist and to defy.”

Dennis Queen, who has taken part in numerous direct actions as a DPAC activist and previously with the Disabled People’s Direct Action Network, said the measures appear to be “designed to shut down anything at all that might inconvenience anyone.

“All protests annoy somebody; at the very least, they annoy the powerful targets.

“Annoyance to the public was a factor before and had to be proved to convict. But not risk of annoyance.

“I can see it is true, having been charged under the common law for public nuisance, that this was a tight law and it was hard to convict people for unnecessary, subjective things, like peaceful protest.

“Changing this law puts all public resistance at risk, even just vigils.

“As a nonviolent civil disobedience protester, I have come to expect police treatment like that at Clapham Common last weekend.

“But women holding peaceful vigils do not expect this, nor should vigils like theirs be criminalised. Under this law change, we would see more of this, for less and less.”

Queen was charged and then cleared for her part in a DPAC anti-austerity protest in Manchester in October 2017, during the Conservative party conference.

She and others had held up city centre tram services outside the conference, but she was cleared* of causing public nuisance partly because she was able to show the court that some of the passengers had left the tram and joined them on the protest.

John McArdle, co-founder of the grassroots group Black Triangle, who has also taken part in numerous protests, said: “Can you imagine how easy it would have been to arrest, charge and convict us on all the demos we’ve done using this new legislation?

“This is effectively a ban on the right to peaceful protest, in contravention of the European Convention on Human Rights (PDF).

“It’s the biggest attack on civil liberties since the end of World War Two.

“Britain can no longer be considered to be a free and democratic society if this bill passes in its current form.”

Sandra Daniels, who has taken part in both DPAC and XR Disabled Rebels protests, said the measures showed the government was “trying to silence minority groups”.

She said: “The government’s actions and how they have treated disabled people with the austerity cuts, and throughout the pandemic, only pushes us to fight back as we have nothing to lose.”

She added: “I’m not a disabled activist out of choice, but by necessity.”

Michael Bosley, another member of the XR Disabled Rebels group, said he believed some of the protest clauses could discriminate against disabled people.

He said that those with mobility impairments “might be more likely to be viewed as being ‘annoying’, a ‘nuisance’ and would have greater difficulties with inflexible start and stop times.

“The policing of the Sarah Everard vigil showed the police have no awareness or sensitivity when policing demonstrations; something we’ve previously experienced when the Met police impounded accessible toilets and ramps during the XR demos in 2019.

“So as disabled people, we are again at risk of having our rights to speak, to assemble and to protest still further restricted.”

Another XR Disabled Rebels member said the bill would increase the targeting of neurodivergent people.

They said: “Non-neurotypical behaviour at peaceful protests will be criminalised.

“Lack of medical facilities and support in UK custody and prisons will be enough to terrify disabled activists and stop them protesting at all, especially while COVID is still around.”

Mary-Ellen, who has taken part in numerous protests, including many DPAC actions, the 2019 Extinction Rebellion protests in London, and TUC and NHS protests, said she was “extremely concerned” by the government’s plans.

She said: “If our right to protest is taken away from us, then how do we fight a government that is already killing us off through the benefits system and the pandemic?

She added: “If the right to protest is taken away, it will result in even more human rights violations and deaths being hidden from the public and the silencing of dissent and our rights to justice, transparency and accountability.”

A spokesperson for DPAC Cambridgeshire and Essex added: “Disabled activists have been proudly causing ‘serious annoyance’ to governments that systematically deny us the right to liveable lives for decades, and we will continue to do so.

“Disabled protesters are already targets of state surveillance, with some of us having had benefits cut or removed for protesting poverty and discrimination under Tory austerity, as well as other injustices such as the climate crisis.

“Increasing police powers to repress dissent is a transparently authoritarian attempt to escape accountability for state violence of all kinds.”

*She says she was “expertly defended” by Robert Lizar Solicitors

Picture: DPAC activists block a tramline in Birmingham as the city hosts the Conservative party conference in October 2016