You are here: Home / Activism and Campaigning / Archive launch will shine spotlight on impact of disabled people’s movement 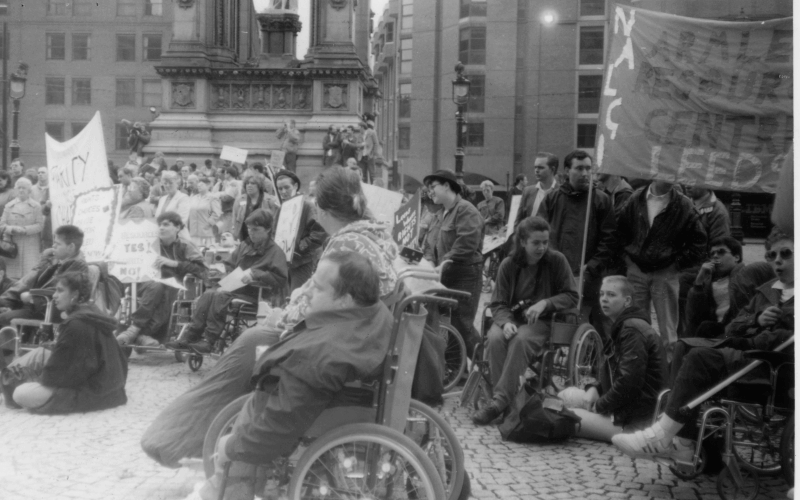 The largest single archive of material detailing the birth, growth and impact of the disabled people’s movement in the UK over the last half-century will be launched in Manchester next week.

The GMCDP Archive consists of about 160 boxes of documents, books, photographs, posters, badges, magazines, newspaper cuttings, postcards, reports and even tee-shirts, some dating back to the late 1960s.

The project began 14 years ago when Greater Manchester Coalition of Disabled People (GMCDP) conducted a feasibility study on setting up a national archive of documents and artefacts connected with the disabled people’s movement.

This led to “spontaneous” donations of material, both by disabled people and disabled people’s organisations (DPOs), a flow of items which continues today.

That material has now found a home in Archives+, a purpose-built centre for archives and family history set within Manchester Central Library.

Most of it will gradually become open to the public, although permission from GMCDP will be needed to view some of the papers, while a few will remain confidential.

An archive of material from the Union of the Physically Impaired Against Segregation (UPIAS) – which played a hugely-significant role in the birth of the movement – will also be deposited with Archives+, alongside the GMCDP archive.

GMCDP said the UPIAS archive would be deposited due to the hard work and dedication of Tony Baldwinson, a long-time ally of the disabled people’s movement and husband of the late Lorraine Gradwell, a GMCDP co-founder.

As well as offering a permanent home for the artefacts, Archives+ has provided support with cataloguing and preserving the archive, working alongside Linda Marsh, GMCDP’s archive development worker.

But only a small part of the archive has been catalogued, and GMCDP is hoping to secure funding for further work.

Archives+ has estimated it will take a full-time worker 18 months to catalogue the entire archive.

Marsh said they had only “scratched the surface” of what was in the archive, with about 20 of 160 boxes of material summarised so far.

She said: “Even if it’s with unpaid volunteers, it will continue. The commitment is within GMCDP and Archives+ to push this forward.”

Part of the reason for the launch is to highlight the importance of archiving important material about the movement.

“It’s so important. Every time somebody dies, we lose what’s in their head.

“And quite often we lose the artefacts that they had as well. It’s not just papers, it’s the badges, tee-shirts, postcards, books. Anything that shows our history is really important.”

She added: “It’s important because, as disabled people, we have made such a significant impact on society in the last 30 years.

“We recognise it ourselves in the movement, but it’s not as recognised in the mainstream as some other aspects of social change.

“It’s just so important to preserve this for our own knowledge and our ability to see our own identity and where we have come from, particularly for disabled people in the future.”

She said the documents she has been most excited to uncover were hand-written planning notes for a rally in Manchester of the Disability Benefits Consortium in 1991 (pictured), along with the parking permit for the van that was carrying the stage for the event.

She said: “It’s all well and good having photographs and postcards, they look really good, but what the archive has is the background detail.”

If there is one document she would like to find, it is something from a black disabled people’s organisation called Spectrum that she remembers from the 1990s.

She said: “There is such a lack of DPOs now that are specifically for black and minority ethnic people, it would be a shame if the knowledge of what went before was to go.”

Marsh is keen for disabled people and DPOs to donate or loan more material from the archive to GMCDP, or to identify an archive in their local area.

And she issued a plea to DPOs to look after their archive material and not throw it away.

She said: “Whatever your organisation is doing, whether it’s a protest or a letter to your MP or organising a lobby of MPs, don’t throw anything away.

“If you’re storing it electronically, store it in at least two places, preferably three. Don’t think that things aren’t worth keeping.”

The launch on Wednesday (19 June) will include speeches from Judy Hunt, wife of the late Paul Hunt, UPIAS co-founder in the early 1970s; Martin Pagel, a GMCDP co-founder and former deputy leader of Manchester City Council; and Deaf actor and activist Ali Briggs, best-known for playing Freda in Coronation Street.

For more details of the launch, visit GMCDP’s website.