You are here: Home / Arts, Culture and Sport / Artists’ banners were 800 years in the making

Three disabled artists this week played a central role in an event held to celebrate the 750th birthday of the UK’s first parliament.

Six huge banners designed by the three artists joined 12 other banners in an exhibition in Westminster Hall, the oldest surviving part of the Palace of Westminster.

The launch of The Beginnings of that Freedome exhibition on Tuesday was held to mark exactly 750 years since the Montfort parliament (20 January 1265) first brought representatives of the cities and boroughs to Westminster to discuss matters of national concern.

The event was part of Parliament in the Making, celebrations that will take place throughout the year, which will also mark 800 years since the sealing of Magna Carta.

The year will explore these and other historic events that have underpinned the establishment of parliamentary democracy and the legal system in the UK and around the world over the last eight centuries.

Each of nine artists was given two events to represent on banners, each one marking a milestone on the journey towards rights and representation, with their work to hang in place until late November.

Jason Wilsher-Mills, a digital artist who uses an iPad to create his paintings, was asked to create banners inspired by the 1834 Tolpuddle Martyrs and the 1995 Disability Discrimination Act (DDA).

For the first banner, he said, he “wanted to make a banner that would pay tribute to these incredibly brave and inspiring men – the Tolpuddle Martyrs – because their actions would inspire those who were forming the very first trade unions”.

For his DDA banner, he said: “The banner is inspired by my experiences before and after the 1995 act.

“Things are still not perfect; we still have much to do, but I can at least go to the cinema with my family. Most buildings are accessible, but attitudes still need to change.”

He said on his blog after the launch: “It was a real honour to be involved in such a prestigious and momentous project and I loved meeting the other artists involved.

“It was like being chosen to play for the best school football team, being part of that talented group of people.”

He said he was “very proud” of his two banners and “even prouder that the children I work with in schools will be visiting Parliament throughout 2015 to see these amazing pieces of art, in a world famous setting”.

Rachel Gadsden, an award-winning visual and performance artist, who works across both the mainstream and disability arts sectors in the UK and internationally, was given the 1601 Poor Law and the 1829 Catholic Emancipation Act as her inspirations.

Of her Poor Law banner, she said: “If the NHS had not been founded in 1945, it is unlikely that I would have survived into the 21st century.

“The banner therefore not only pays tribute to the Poor Law 1601 and its subsequent amendments, but restates, by depicting the key figures who followed, the need for a community to uphold and maintain such values.

“That I have survived is testament to their upholding.”

For the Catholic Emancipation Act, she said that her work was “inspired by the belief that every voice must be heard”, and that she therefore “undertook with relish the process of exploring exactly how during the 19th century all denominations came to be represented in Parliament”.

Paula Stevens-Hoare, a London-based, award-winning figurative painter and former interior designer, was asked to create banners to mark The Great Reform Act of 1832, which extended the right to vote, and the 1967 Sexual Offences Act, which decriminalised homosexuality.

She said of her Sexual Offences Act banner: “As a lesbian who grew up in London, I marched at Pride and against clause 28, and I experienced prejudice first-hand.

“Efforts to win full equality continue. I wanted to design a banner that acknowledged the struggle, but celebrated the gains.” 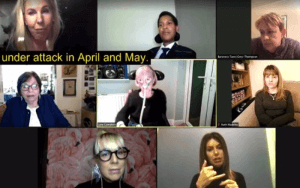