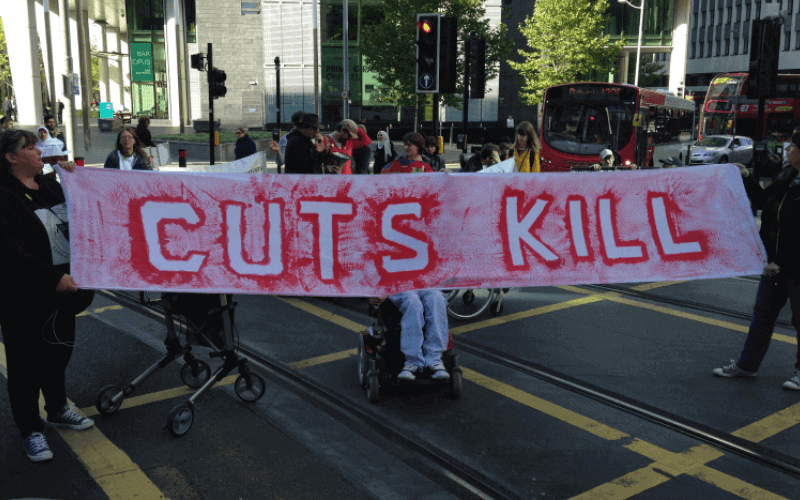 The government has refused to apologise for the “appallingly unnecessary” impact of austerity spending cuts, after researchers linked post-2010 reductions in spending on social care and health to more than 57,000 deaths in just four years.

The findings of the government-funded research suggest that cuts to social care, health and public health caused 57,550 more deaths in England than would have been expected if spending had continued on pre-2010 trends.

The research shows the number of deaths due to austerity was even higher than suggested by previous research, which had linked about 45,000 deaths to health and social care funding cuts between 2010 and 2014.

The researchers also found that extra funding on social care is more than twice as productive in terms of preventing deaths as the same amount of funding spent on healthcare.

The researchers at the University of York conclude: “Our results are consistent with the hypothesis that the slowdown in the rate of improvement in life expectancy in England and Wales since 2010 is attributable to spending constraints in the healthcare and social care sectors.”

The average amount spent by local authorities on adult social care in 2013-14 was £307 per person, although this “varied considerably”, with Barnsley spending £209 per person compared with £660 per person in the City of London.

The same analysis applied to the loss of healthcare spending caused 33,888 extra deaths, they believe.

Professor Peter Beresford, co-chair of the disabled people’s and service-user network Shaping Our Lives, said: “We see the deaths caused by the austerity cuts as appallingly unnecessary and our major concern is that they should not be lost and forgotten as simply another set of statistics but need urgently to be acted upon in the interests of both disabled and non-disabled people.”

A spokesperson for Manchester Disabled People Against Cuts (MDPAC) said: “That social care spending is twice as effective at saving lives than healthcare adds further evidence and urgency to our call for a National Independent Living Support Service, free at the point of need, co-designed with disabled people.

“And crucially, an end to government choosing austerity and the outdated and wrong dogma that supports this deadly policy.”

Earlier this month, MDPAC helped organise a mobile video screen that showed messages from disabled people about the years of attacks on their support and rights to delegates visiting the annual Conservative party conference in Manchester.

A spokesperson for Cheshire DPAC, which also helped organise the mobile video screen, said: “The York researchers’ findings deepen our understanding of the impact of political decisions on disabled voters’ lives – and the risk to life that results from health and social care policy that opts for short-term electoral advantage over the interest of society as a whole.

“We have to start withholding our support and votes from politicians who fail to engage with the transformative potential of disabled people’s own social care policy proposals.

“The way forward for us as a progressive and inclusive society is to reframe social care as the right to an independent life, supported by universal, publicly-owned services, free at the point of need.”

In the paper, published by BMJ Open and funded by the National Institute for Health Research, a government agency, the researchers say that the powerful impact of extra social care spending on reducing deaths is “slightly surprising”.

But they say this is likely to be because cuts to social care spending have both direct and indirect effects.

Direct effects could include cuts to social care increasing the risk of life-threatening falls.

And indirect effects could include a lack of social care leading to a hospital being unable to discharge patients from hospital, so bed cannot be used by others who might benefit from them.

The researchers say: “Although social care is primarily concerned with improving the quality of life, it is perfectly plausible that social care extends life and that those with care needs enjoy both a lower mortality rate and a better quality of life in those [local authorities] with more generous social care provision.”

DHSC refused this week to apologise for the tens of thousands of deaths the research suggests were caused by the post-2010 period of austerity, or to say if it accepted that this sharp decrease in spending on health and social care was a mistake.

It also refused to say if it accepted the findings of the government-funded research.

But asked if DHSC agreed that the research made a strong argument for sharply-increased spending on social care in next week’s spending review, a government spokesperson said: “We are committed to levelling up health and the new Office for Health Improvement and Disparities will support people of all ages, in all areas of the country, to live healthier lives.

“The government is helping local authorities improve public health by increasing their grant to over £3.3 billion this year, as well as making over £10 billion available to address the wider costs and impacts of COVID-19.

“We are also investing £36 billion in health and care over the next three years* – including £5.4 billion for social care – to put in place comprehensive reforms that are sustainable and fit for the future.”

*When the prime minister’s plans for social care reform were announced last month, there was almost universal criticism across the disabled people’s movement of the inadequate level of funding, the failure to address the needs of working-age disabled people, the lack of detail, and the disproportionate impact of the plans on lower-income workers

Picture: DPAC activists at a protest in Birmingham during the Conservative party conference in October 2016