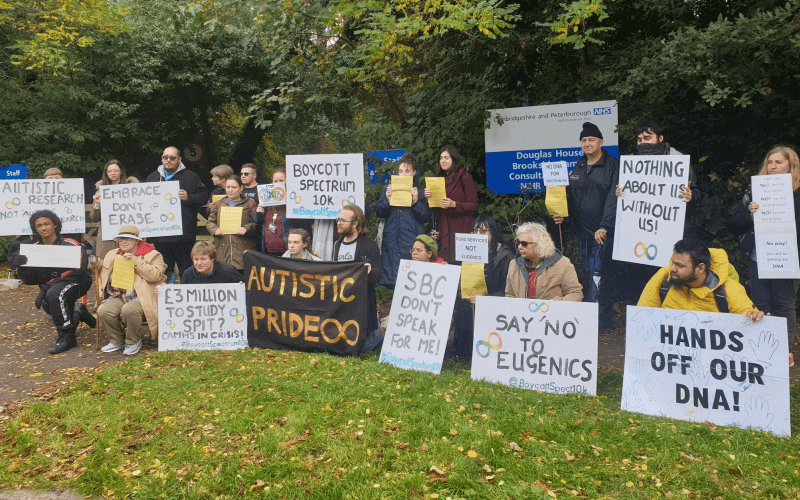 Autistic campaigners protested for hours outside the research centre at the centre of a £3 million study that they believe could be used for the purposes of eugenics.

They were forced to protest outside the entrance, beside a main road, after managers locked the main gate.

Protesters (pictured) who spoke outside the main gates warned that the Spectrum 10K study “could potentially be used to eradicate us” and was treating autistic people like “lab rats”.

There was also anger among many of the activists after Professor Sir Simon Baron-Cohen, who is heading the research, warned them in advance that police officers and police dogs would be present during the protest.

He had told one of the organisers that the University of Cambridge and NHS, which have offices in the building where his research centre is based “have had to take advice from the police to protect their property, staff and patients in the event that a protester decides to do something unlawful”.

Emma Dalmayne, chief executive of the autistic-led group Autistic Inclusive Meets, who helped organise the action, said the warning that police would attend had been a “deliberate scare tactic”.

“He was hoping, I believe, to put people off protesting.”

Baron-Cohen later apologised to her for “providing inaccurate information” and “any distress this has caused” after he admitted that there were “no plans for police, or police dogs” to be present and that he had “misunderstood the situation”.

Dalmayne, who is hoping to meet Baron-Cohen later this month, said she was “sadly not surprised” that they had been locked out – with a “brand new chain” – because “they lock us out of everything”.

Protesters were forced to use the facilities of a local golf club that allowed them to use their facilities and accessible toilet.

The efforts of autistic campaigners – particularly those from the #StopSpectrum10K campaign – had already persuaded Baron-Cohen’s team to pause work on the high-profile study, which was aiming to collect DNA samples from 10,000 autistic people across the UK.

The Spectrum 10K project would be the largest study of autism in the UK, and the researchers say they want to examine how biological and environmental factors impact on the wellbeing of autistic people.

They say the project will “not look for a cure for autism and does not aim to eradicate autism”, but campaigners say there are “enormous” concerns about the research and its undertones of eugenics, and have warned autistic people not to take part.

One of those who spoke at the protest was Priscilla Eyles, who told fellow protesters: “They try to pretend… this is something that’s going to help us, and it’s just the absolute opposite of that, it’s like doublespeak, it’s like Orwellian doublespeak.

“We are not lab rats, we’re human beings.”

“They’ve locked the gate, they don’t even want to speak to us and yet [they claim] they’re friends to autistic people. How?”

Dalmayne said: “To all the parents that think you’re helping, you will have been told that you’re helping your child but actually when you’re asked for your child’s DNA ask if that money could not be better spent on support, on EHCPs (education health and care plans).”

She pointed to the locked gate and said: “We’ve got all of these people out here, all autistic, no-one’s here to speak to us.

“Literally, they’ve locked us out completely. And that’s how it is in reality, we are locked out of any research or anything about us and it shouldn’t be like that, there should be nothing about us without us.”

Another speaker, Lizzie, said: “I just want to appeal to any of the parents out there who think Spectrum 10K is going to help their children.

“What we need is that three million invested in CAMHS, in support services, and in things to help people that are already alive – autistics and future autistic children that are going to be born – to support their needs and to help us communicate effectively, get the mental health support we need, and the access to services, so that they don’t have to go through the trauma that so many autistic people have already gone through.

Nicky Vere-Compton warned that the research could eventually be used to encourage parents to abort unborn babies that had a genetic link to autism.

She said: “We have already seen what happened when they found a DNA link for Down’s.

“They used that as an opportunity to have conversations with the parents of unborn Down’s babies, saying, ‘Would you like to abort your child?’

“And as a consequence, less Down’s babies are being born now.

“If they find the DNA link for autism, which they won’t, because I don’t believe it exists, but if I’m wrong and they do, what will happen is that every doctor will be speaking to the parent of an unborn autistic and saying, ‘Would you like to abort your baby?’

“The level of ignorance about the autistic neurotype means that more parents than not will say, ‘Oh no, I don’t want an autistic child’ and there will be less of us being born.

“There is no argument that this is not eugenics.”

Cos Michael, who held a placard saying, ‘embrace don’t erase’, said: “Whenever the government want to know about autism, whenever they are developing policy, whenever there’s a big international conference, Simon Baron-Cohen is the go-to expert, he is the keynote speaker who everybody who is not autistic goes to.

“If he is at their conference, if he is round their policy-making table, they are satisfied they have ticked the box.

“As an autistic person, I just want everybody there to know that when they employ Simon Baron-Cohen, he does not speak for us.

A statement read out on behalf of the London Autism Group Charity said that it supports only “ethical” research that is not linked to eugenics and which respects and is led by autistic people, and which will improve the lives of autistic people.

The statement added: “Therefore, we stand alongside our autistic allies and fully support the campaign to boycott Spectrum 10K, which fails in this regard. We call for its permanent cancellation.”

David Gray-Hammond, who read out the statement, added: “On a personal note, I think most of us were lost for words when we saw this research come out… it’s yet another attack on the autistic community.

“Yet again, people are trying to find out what causes autism, rather than actually support the ones that are already here.

“Because we are here, we are human beings, we exist and we deserve support, and instead £3 million is being poured into research which could potentially be used to eradicate us.

“We have a right to exist.”

Dalmayne told Disability News Service (DNS) afterwards that the protest showed the researchers that “autistic people are not going to be ignored”.

She said: “Shutting a gate and putting a padlock on it is not going to shut us out of the discussion.

“We will be part of it whether they like it or not.

“It’s going to affect future generations of autistics for ever, the outcome of this research.

“It would be negligent of us not to stand up and say something.”

Baron-Cohen agreed that he had mistakenly told Dalmayne that police and security dogs would be present when she had asked if they would be, and when he realised this was wrong “contacted the campaign group as soon as possible to inform them and to apologise for any distress this may have cause”.

He told DNS: “My first email to the protest leader was in no way intended to discourage autistic people from attending the protest, or to cause them any distress.

“My team and I support the right of anyone to hold a peaceful protest.”

He said: “The Autism Research Centre team shares a private building and site with other clinical and research teams… and access is by appointment only, subject to visiting restrictions during the pandemic.

“We only occupy part of the building, which is unable to host a large group of protestors.

“The site is not open to the public and was closed on Friday to maintain safety and security.

“The campaign group did not ask permission to visit the site and organised the protest without involving us in their arrangements or requesting a meeting first.

“We are pleased to now be in touch with the campaign group leaders and have offered them a meeting to discuss their concerns.”

He said he had phoned the golf club across the road “to make them aware that this peaceful protest was happening and to ask if they could let the protesters use their café and toilets.

“The manager of the golf club was happy to agree. I immediately emailed this information to the leader of the protest to explain they could use the golf club café and toilets, and to shelter if it rained.

“I gather that golf club staff brought the protesters free drinks and refreshments, which I think was a lovely gesture of local community support for autistic people and their families, and we are very grateful to the golf club.”*

He said the Spectrum 10K project “aims to understand the genetic and environmental factors that contribute to autism and the health conditions experienced by autistic people”, and that his team “acknowledge that more work still needs to be done to address concerns expressed by some members of the autism community, including this protest group”.

He said that “both eugenics and the development of a prenatal test for autism run counter to our values and that this is not why the research is being done” and that the research was “being done purely to deepen our understanding of the genetic causes of autism and of the genetic links between autism and health conditions (such as epilepsy and gastrointestinal pain) that are more common in autism”.

He added: “But given the history of eugenics in the field of disabilities, we take the protestors’ concerns very seriously and want to address them meaningfully.

“This is why we have launched a wider consultation with the autism community, to listen, better understand, and discuss their concerns.

“The consultation is expected to run well into 2022.

“After the consultation we will continue to include an expanded autism community advisory panel in the research.

“We are looking forward to meeting with the campaign team in a few weeks’ time, to discuss the project with them, alongside the consultation we are co-designing with autistic people and their families.

“An organised meeting will give us an opportunity to listen to their concerns, and to share and respect different viewpoints in a constructive way.”

He added: “I hope that we can work together via the consultation process to make changes to our study to improve it and put in place any additional safeguarding required.

“We also look forward to clarifying misunderstandings about the aims of the study and explaining that our team would never want to do research that could cause harm to autistic people.”

*Dalmayne said: “As lovely as the golf club were, we paid for our coffee and muffins, [but] they were kind enough to donate some water.” 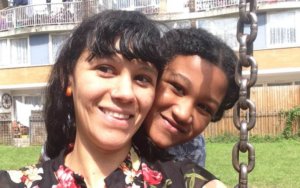