You are here: Home / Transport / Bus company breached access laws… and then lied about what it had done 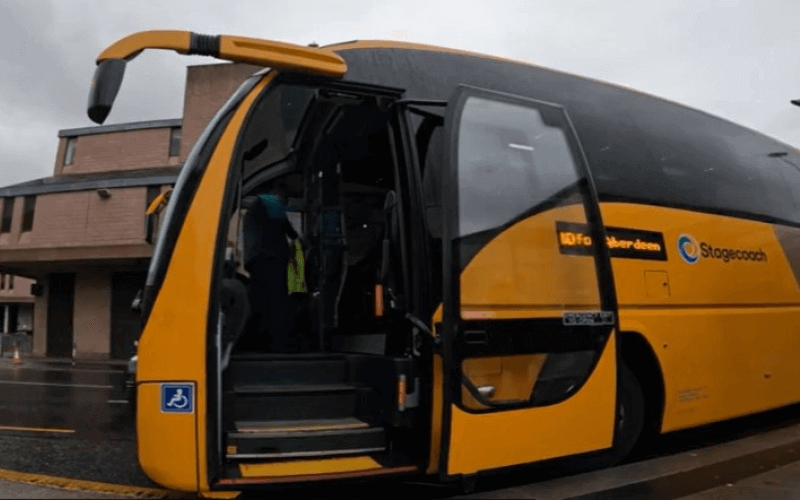 A public transport provider breached access laws by refusing to allow a wheelchair-user to board one of its buses, and then lied about its driver’s actions.

Accessible transport campaigner Doug Paulley is taking legal action against Stagecoach after he was refused entry onto one of its buses as he and his brother tried to travel from Inverness in the Highlands of Scotland for a trip to a whisky distillery in the nearby town of Elgin.

Although the Stagecoach Bluebird vehicle (pictured) was wheelchair-accessible, and the wheelchair space in the bus was available, the driver refused to allow Paulley to travel.

As he has faced repeated discrimination and service failures in his attempts to access public transport, Paulley always records video of his journeys.

Disability News Service has seen the recording of the Inverness incident, which shows the driver initially claiming that Paulley’s wheelchair was too big, before admitting that the reason he could not board was because he was unable to remove the temporary seat that occupied the wheelchair space.

It also shows him having detailed discussions with the company’s control room on his mobile phone about what action he should take.

It is unclear whether he does not know how to remove the temporary seat or whether it is not possible to remove it.

Paulley turned down the driver’s offer of waiting for an accessible taxi because he said he wanted to take advantage of his legal right to access the bus, but also because he finds taxis “dangerous, uncomfortable and unreliable, especially in remote Scotland”, with only about 50 accessible taxis and private hire vehicles available across the entire Highlands.

He said: “The taxi roof is always really low, so I have to travel hunched over with the back of my neck and shoulders pressed against the ceiling.

“I nearly always find that I am incredibly uncomfortable and not strapped in properly.”

He was later forced to wait for another Stagecoach bus, which had a more accessible layout and which he and his brother boarded successfully.

The original bus followed behind and later in the journey had to leave another wheelchair-user at a bus stop because of the same access problem.

Stagecoach has insisted that it did not breach the Equality Act and its duty to make reasonable adjustments for disabled passengers.

In response to a legal letter from Paulley about the incident on 15 October, Stagecoach’s solicitors insisted that he had not been allowed on board because the driver “explained to you that he considered that it was not safe for you to travel on the Vehicle due to the size of your wheelchair”.

Responding to this letter, Paulley said Stagecoach had “quite clearly acted in bad faith, lying about the supposed reason that they refused me transport on that bus”.

He told Stagecoach’s solicitor: “My brother and I were prevented from getting on that bus, causing immense stress and stuffing up our long-held and anticipated plan for our holiday, simply because your client was not set up to accept wheelchair users on your bus, in contrary to moral, civil and criminal law obligations.”

And he said Stagecoach had “responded with hostility and dishonesty” to his legal claim.

Stagecoach claims it took “all reasonable steps to prevent its driver’s alleged failure to make reasonable adjustments by providing significant training to its drivers, having clear policies on how to deal with disabled passengers and then fully investigating the matter upon receipt of a complaint”.

And it told Paulley, through its solicitor, that its driver had “sought to comply with our client’s policies by having concerns for your safety, offering a taxi and waiting with you until the second vehicle arrived”.

Paulley told Disability News Service that he believed Stagecoach was regularly sending out vehicles “that can’t actually be used by wheelchair-users, because they leave a seat installed in the wheelchair space [that cannot be removed].

“This is disgraceful and illegal, and more to the point, highly immoral.

“All local and scheduled bus services have had to be accessible to wheelchair-users, including those travelling spontaneously, for years now; yet Bluebird were quite content to knowingly send a vehicle out in a condition that meant wheelchair-users, myself and another, were prevented from travelling.”

He said this was “blatantly discriminatory” and the company had later “lied about the stated reason that I was prevented from travelling”.

He said: “To attempt to lie one’s way out of the consequences of one’s illegal discriminatory action makes everything so much worse, and makes me even more determined to hold them to justice.”

Paulley has previously shown that a different company was breaching the law by failing to ensure that such spaces can be accessed easily and refusing to allow wheelchair-users to “turn up and go” on its services.

That case led to the Driver and Vehicle Standards Agency warning that operators would face “tough action” if they fail to comply with the law on wheelchair spaces.

Any buses that have been adapted to be compliant with Public Service Vehicle Accessibility Regulations must provide a wheelchair space and make that space available to wheelchair-users.

Separate laws state that a driver is committing a criminal offence* if he or she does not allow a wheelchair-user to access that space, if it is not occupied by another disabled passenger and the bus is not full.

But if the seat could not be removed for a physical reason, it is possible that a criminal offence was committed by Stagecoach, the driver and Stagecoach managers under section 175 of the Equality Act.

A spokesperson for Stagecoach Bluebird said: “We want our services to be as accessible as possible for everyone and we have made millions of pounds of investment in our fleet and other areas to assist passengers who have specific requirements.

“In addition, our drivers receive regular training on helping disabled passengers to travel safely with us.

“In the event that our services are not able to safely carry a customer using a wheelchair or mobility aid, we will always provide a free wheelchair accessible taxi.

“We do take complaints about our services very seriously and will always carry out a full investigation into any claims of this nature.”

A Police Scotland spokesperson said: “We were made aware of a dispute between a man and a bus driver at Falcon Square in Inverness around 10.10 am on Saturday, 15 October.

“Officers attended and provided assistance. The man was able to travel on another bus a short time later and enquiries into the incident are ongoing.”

*This is a breach of the Public Service Vehicles (Conduct of Drivers, Inspectors, Conductors and Passengers) (Amendment) Regulations 2002, and contravention of this regulation is an offence under the Public Passenger Vehicles Act 1981