You are here: Home / Human Rights / Charity ‘must listen to autistic people’ in wake of abuse scandal 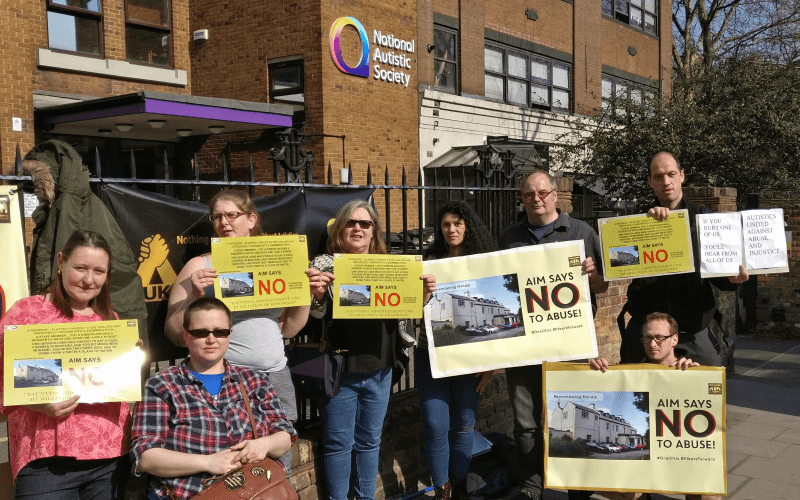 Protesters have warned the National Autistic Society (NAS) that it needs to listen to the voices of autistic people or face being “sidelined”, in the wake of the Mendip House abuse scandal.

Representatives of three autistic rights organisations were protesting outside the charity’s London headquarters (pictured) about its failure to act on the regime of abuse that took place at the Somerset care home.

They said the scandal was a “wake up call” for NAS.

Protesters warned the charity that the autistic rights movement was growing ever stronger and that NAS must do more to listen to their voices.

Two families of autistic people who were abused at Mendip House in Brent Knoll, Somerset, were also at Friday’s protest, and provided Disability News Service (DNS) with further evidence of how the charity had failed their relatives.

The families were highly critical of NAS, the Care Quality Commission (CQC) and the police for their failure to stop the abusive regime earlier, and to provide justice for their autistic relatives.

Among those protesting was Joseph Radford, a member of the organising group of Neurodivergent Labour, which launched in February.

He said his message to NAS was that “autistic people are not going to take this anymore”.

He added: “We are organised. There are more of us. We are not going to be fobbed off.

“We are a growing movement. We are speaking with a clearer voice.

“You can’t keep sweeping stuff under the carpet anymore because if you do there will be push back.

“Either listen to our voices or end up sidelined yourselves.”

He said the failure to punish the perpetrators of the abuse “just shows how autistic people are not listened to in society” and are judged only on their ability to communicate.

He said: “If we can’t communicate, we are ignored, not listened to, and abuse is overlooked.”

Emma Dalmayne, chief executive of Autistic Inclusive Meets, who organised the protest, said: “The NAS by and large is recognised by the autistic community as being for parents and children.

“In order to move forward from this, I believe autistic people need to become more involved.

“They also need to start supporting the hordes of adults out of work who need an advocate.”

Dalmayne called for a “proper inquiry” into what happened at Mendip House.

And she said NAS should offer compensation to the former residents of Mendip House who were abused, and that it was “appalling” that none had been offered so far.

She said: “Money cannot erase the memories or degradation. It can however go towards future care and necessities for the residents and their families.”

Julian Morgan, an AIM director and a committee member of Autistic UK, said: “NAS are saying they want to move forward from this but part of moving forward is changing your culture.

“We have seen no sign that there is any intention to change their culture.

He said the charity had not admitted that anything happened at Mendip House until it was forced to do so.

Morgan said their concerns were not about many of the people who worked for NAS, who were “hard-working and conscientious and care about what they do”, but senior executives in “what has become a rather bloated organisation”.

He said NAS had been concerned only with its image after it found out about the abuse at Mendip House, which he said was “objectionable and abhorrent”.

And he called for senior executives responsible for failing to stop the abuse to be “stripped out” of the charity.

Rebecca*, the mother of one of the former residents of Mendip House, said NAS had downplayed the seriousness of the abuse at the homes when she and her husband were first told about it in the summer of 2016.

It wasn’t until they saw the safeguarding adults review in January 2018 that they realised the seriousness of what had happened, she said.

The report detailed how staff had thrown cake at service-users and taunted them with food, while one resident was sent to his room because he refused to eat an onion, another was made to crawl on the floor on all fours, medication went missing, and one resident was said to be “known to flinch in the presence of particular employees”.

Newspaper reports also suggest that one resident was “slapped, forced to eat chillies and repeatedly thrown into a swimming pool”.

CQC decided earlier this month not to prosecute the charity, and instead fined it just £4,000 for financial abuse by staff, despite the regime of “taunting, mistreatment and humiliation of residents”.

Rebecca said she was angry that the perpetrators of the abuse had avoided prosecution and had been able to “move on with their lives”.

And she said the way the charity had dealt with the abuse had been “shocking”.

She said: “I am still so angry. They absolutely failed our kids. We have had, ‘We are really sorry,’ but sorry comes cheap.”

Her daughter was a resident at Mendip House for 22 years, until she left after the abuse was uncovered.

Rebecca said there were concerns about safety standards in the home “right from the beginning” because her daughter has been injured several times by a “challenging” fellow resident, on one occasion having to be admitted to hospital.

She said: “We weren’t told about it until he had hurt her three times.”

One of the things she and her husband want to see for disabled people in care who do not have capacity to make their own decisions is the installation of CCTV cameras in communal areas of such homes.

Rebecca’s husband said he believed NAS had taken in residents with challenging behaviour alongside others like his daughter who were vulnerable in such situations because it allowed them to charge more money.

He said: “A person like [my daughter] should be entitled to be not afraid of the people they are living with.”

Rebecca said: “It was a whole system failure. Everybody has failed us: the CQC, the police, the commissioners who paid for it, and mostly the NAS.”

Sarah*, whose brother was a resident of Mendip House for more than 40 years, said she too had been told by the charity in the summer of 2016 that the concerns were just over “laddish” behaviour and “horseplay and high jinks” by young male members of staff.

But she later found out that her brother had “gone through this terrible ordeal”.

She was told the abuse only took place over a year-and-a-half, but she believes he was being abused for far longer than that.

She said: “I am looking back through those years when he said, ‘I don’t want to go back to Somerset Court [Mendip House was one of seven NAS facilities on the Somerset Court site].’

“He would get so depressed that he had to go back to Somerset Court. It got worse and worse, particularly in the last six years.”

She said her brother was much happier now in his new home.

Sarah has spoken to one whistle-blower who says she was sacked and threatened after she raised concerns about the abusive regime at Mendip House.

She said: “What is not right is it just being swept under the carpet. For me, the whistle-blowers and the abusers are being treated the same – they all lost their jobs.”

She also wants to see CCTV cameras installed in such homes in the future, as well as “transparency” from service-providers like NAS.

NAS repeated its apologies for the abuse at Mendip House, and said it was “shocked to hear that families believe there was abuse before 2014, as this is not something that has come up in previous investigations.

“We hope that they will raise it with us in our subsequent correspondence so we can investigate.

“They should, of course, also still report this to the CQC so that it can be investigated.”

A spokesperson said NAS was “profoundly sorry for the abuse and poor practice” at Mendip House.

“And we’re always open to ideas about how we can do this more or better.”

He said autistic people work at the charity, shape its campaigns and training material and co-present at its training and conferences, while the autistic people it supports are “absolutely central in planning their own care and support”.

He said NAS would work with any further inquiries that were launched, and would respond to any concerns from families, including on possible compensation.

The spokesperson said that NAS had taken “immediate action” once it became aware at a national level of what had happened at Mendip House in 2016, disciplining and dismissing staff and then introducing “a range of other changes to try and make sure that nothing like this ever happens again”.

He said: “We believe we had and have the right people in place to implement these changes and that any resignations would not have helped the situation.

“If it ever becomes apparent that we don’t have the right staff in place – at any level – then we will of course replace them with people who can continue to improve our services.”

He said that the decision of Mark Lever, NAS’s chief executive, to leave the charity “does not have anything to do with the abuse at Mendip House”.

And he said NAS was “very sorry to hear that two of the families feel that we misled them” about the scale of the abuse in June 2016, and added: “At the time of this meeting we did not know all the details and were also limited in what we could say because there was an ongoing police investigation.”

He also said it was “not true” that NAS had taken in residents with challenging behaviour alongside those who would be vulnerable living alongside them so it could charge more money “as each and every placement in our services has to be based on someone’s needs and also compatibility with the other people in the service”.

On the issue of CCTV cameras in communal areas, he said: “It’s obviously a complicated issue, given that we’re talking about people’s homes.

“However, we recognise that this is something that all care providers need to think about and we are exploring how this could work while protecting people’s right to privacy.”

He said any such decision “must be made in consultation with the people who use… services, their families, carers and staff”.

He also denied that any member of staff at Mendip House was sacked for being a whistleblower, which he said was “not something that we would do”.