You are here: Home / Benefits and Poverty / Coffey dodges MP’s questions over death of Philippa Day 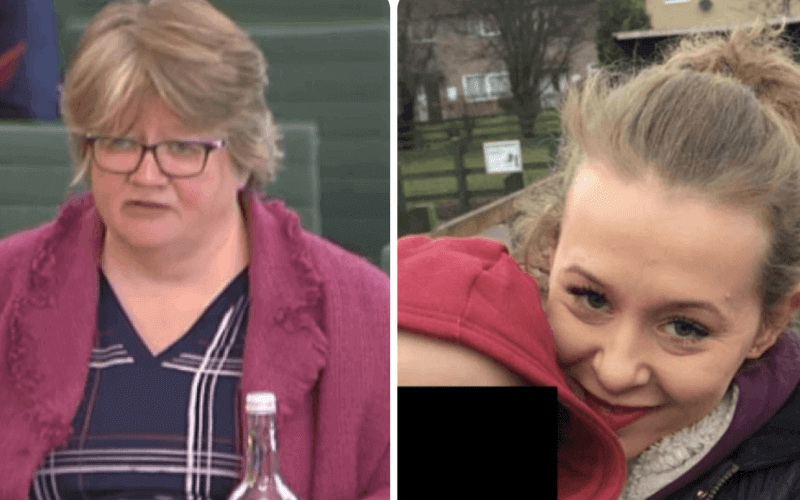 The work and pensions secretary has refused to answer questions from an MP about the death of a young disabled mother which was blamed by a coroner on flaws in the disability benefits system.

MPs on the work and pensions committee yesterday (Wednesday) had their first opportunity to question Therese Coffey (pictured, left) about how the Department for Work and Pensions (DWP) treated 27-year-old Philippa Day (right), following the end of a lengthy inquest into her death.

The evidence session came exactly a week after the coroner highlighted 28 separate “problems” with the administration of the personal independence payment (PIP) system that helped cause her death in October 2019.

Gordon Clow, assistant coroner for Nottingham and Nottinghamshire, said last week that flaws in the disability benefits system were “the predominant factor and the only acute factor” that led to her taking her own life.

But Coffey told her that, because DWP had been told the family intended to take legal action against the department, she would be unable to answer questions about the case.

It is not the first time she has used this excuse to avoid answering questions about the death of a claimant.

Last July, Coffey repeatedly told members of the same committee that she could not answer their questions because of ongoing legal actions being taken by the families of other claimants who have died, such as Jodey Whiting and Errol Graham.

Yesterday, Coffey made no expression of regret or apology to the family of Philippa Day, saying only that it was “a very sad situation”.

She said the department had not yet received the coroner’s prevention of future deaths report, which DWP will have to respond to, but she told Abrahams: “I do take these matters seriously.”

She said that was why she had taken steps to strengthen the department’s serious case panel, which first met in September 2019 while Philippa Day was lying in a coma in a Nottingham hospital.

Coffey said: “It’s now meeting quarterly, working on themes, and those are the sort of approaches that I hope we will try and get the systemic changes and improvements on how we handle this on an ongoing basis.”

Asked by Abrahams if the measures she had taken would “prevent other Philippas”, she said: “I think that we are seeing, through the serious case panel and some of the actions taken, definitely there are changes about improving more generally aspects of that…”

Coffey had to ask the DWP’s permanent secretary, Peter Schofield, to provide examples of the “actions taken”.

He said steps had been taken over the last two years to improve the way DWP identifies on its system that a claimant needs additional support and to ensure that more senior civil servants were informed before removing the benefits of someone with additional support needs, both of which were key areas highlighted by the inquest.

He said DWP had been “talking to Capita” – the outsourcing giant also implicated in the death of Philippa Day – and Atos, which also provides PIP assessments, about changes they are making on “revisiting decisions” and how to decide if a face-to-face assessment is required, both key issues raised by the coroner.

And he said DWP had improved its mental health training – another concern raised by the coroner – and was looking to make further changes.