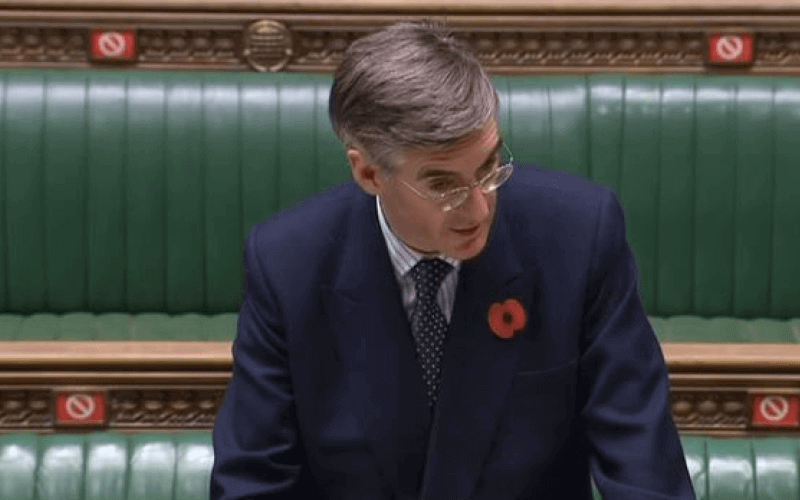 Concerns are growing over comments made by a government minister who told MPs shielding from coronavirus that it was their “duty” to return to the House of Commons, even though that could put their lives at risk.

One MP who has been shielding from the virus has described the comments of Jacob Rees-Mogg as “shocking” and said he had “offended every individual across the UK who is unable to go to work because they are at high risk from COVID”.

Concerns about his comments, and the safety of MPs who are clinically extremely vulnerable (CEV) to the virus, have also been raised this week by both the Equality and Human Rights Commission (EHRC) and the Health and Safety Executive (HSE).

There are thought to be scores of MPs who are shielding at home because they or close family members are in the CEV group.

Many of them will have been told of concerns, reported last month by Disability News Service (DNS), that fellow MPs are flouting social distancing rules in the House of Commons.

Last week, the government told people seen as CEV that they should work from home and should not visit their workplaces.

But it is still refusing to allow shielding MPs to play a full role in parliamentary proceedings, including taking part in debates on new bills.

Last week, Rees-Mogg rejected a request by Vicky Foxcroft, Labour’s shadow minister for disabled people, who herself has shielded during the pandemic because of a long-term health condition, to “commit to setting a good example” by allowing her and other MPs who are CEV to take part in debates remotely.

But Tory MP Mike Wood then asked Rees-Mogg that, as he had been “encouraged to lead by example during this lockdown… what example does he think it would set to those teachers and other key workers whom we are asking to go to work on the frontline if members of parliament decided that they could do just half their job elsewhere?”

He said: “We should be proud to be doing the same as them and working here physically.

“Duty may not be a fashionable word, but it is the right word to use. It is our duty to hold the government to account and to legislate, and to do that properly, we need to be here.”

Dr Philippa Whitford, who spent 33 years as an NHS surgeon and is shielding because of a long-term health condition, told Rees-Mogg last week that she took “great offence” at his suggestion that she was “somehow shirking my duty” by not attending parliament in person.

He declined to apologise.

This week, Dr Whitford told DNS that Rees-Mogg’s comments had been “shocking” and “offended every individual across the UK who is unable to go work because they are at high risk from COVID or has a vulnerable family member who is.

“It is also highly irresponsible suggesting such individuals should travel, in many cases, hundreds of miles on planes, trains and other forms of public transport just to get to work when provision to fully engage from home could easily be provided.

“Indeed, we saw earlier in the year the incredible work achieved by the House of Commons digital service to launch full virtual participation for MPs.

“The position of the UK government is untenable; they are actively excluding MPs who are at high risk from COVID and those who have a vulnerable family member at home, but they are also sending out a message that it is okay to exclude those who are vulnerable from the workplace.”

She added: “Full virtual participation must be restored for MPs to ensure those who need to be protected can still fully represent their constituents in parliament and to set the right example that when the default is to work from home that MPs, along with other workers, are not making journeys which are unnecessary and perhaps spreading COVID further around the UK.

“It is crucial that MPs are able to participate fully in all parliamentary business during the COVID crisis and as the EU transition period comes to an end.”

Concerns about the position in the House of Commons and the comments of Rees-Mogg have also received support this week from both EHRC and HSE.

An EHRC spokesperson said: “MPs who need to shield, self-isolate or who otherwise struggle to attend parliament in person should follow the same advice the rest of the country is being given.

“They should not have to put their health at risk to represent their constituents when such important decisions for our country are being made every day.

“Parliament should look very hard at how they can remain fully inclusive during the coronavirus pandemic, like many other workplaces, and allow these MPs to safely take part in the democratic process.”

HSE told DNS that it was “aware of concerns” about the safety of MPs.

Asked about the comments by Jacob Rees-Mogg and the reports of MPs failing to comply with social distancing rules, an HSE spokesperson said: “We are aware of concerns.

“While we have no jurisdiction at the Palace of Westminster, all places of work are expected to adhere to the government’s working safely guidelines.”

Rees-Mogg declined a second opportunity to apologise for his comments this week, but a government spokesperson said: “The government firmly believes that constituents are best served when parliament meets physically to the fullest extent possible.

“The House [of Commons] has agreed measures to ensure that members who cannot be in parliament physically can vote by proxy and participate in interrogative proceedings.”

This included allowing them to take part in oral and urgent questions and responding to ministerial statements, to take part in select committees, and to vote via a proxy system.

But Rees-Mogg is refusing to make the changes necessary to allow them to take part online in debates on motions and legislation.