You are here: Home / Independent Living / Council boss in Capita care cuts storm admits one in five had support reduced 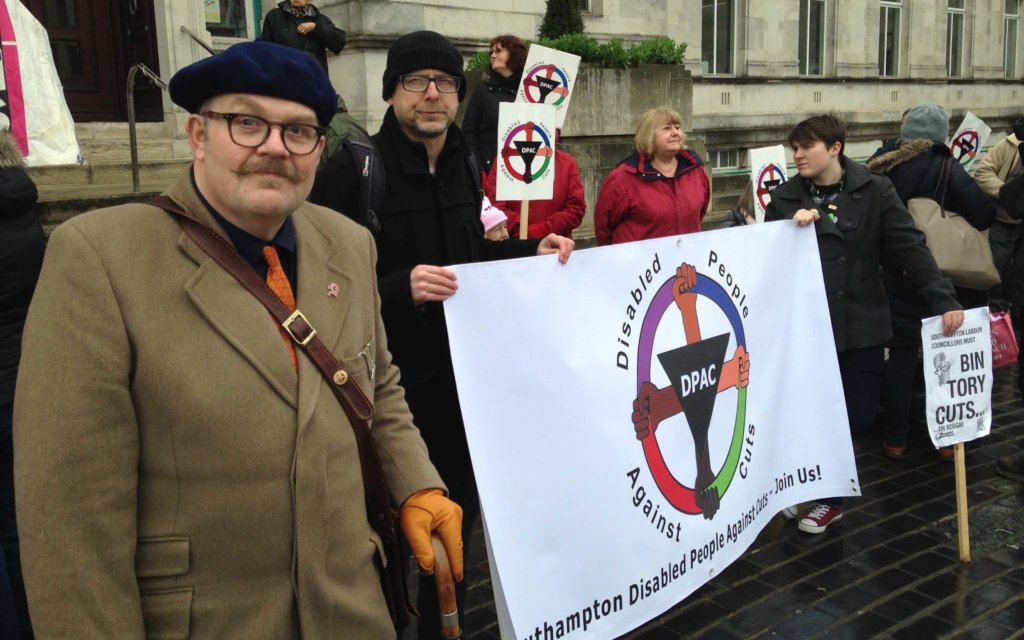 A council leader has admitted that one in five of the disabled people whose care packages were reassessed by the discredited outsourcing company Capita have had their support cut.

Simon Letts, the Labour leader of Southampton City Council (SCC), also admitted that none of the 90 service-users whose direct payments packages have been reassessed by Capita have seen their support increased.

Letts was forced to speak out as activists from Disabled People Against Cuts (DPAC) and their allies protested outside his council’s offices after a Disability News Service (DNS) story revealed how freelance social workers were offered an “extra incentive scheme” by a Capita manager last September if they increased the “savings” they achieved by cutting people’s support.

Although that email offer was later withdrawn – the council and Capita insist it was never approved – another leaked Capita email passed to DNS showed how the council continued to pressure the company to cut care packages.

The second email, sent on 8 November by the same Capita manager, said: “The senior [council] managers who are leading this transformation want to know why we are failing to realise the results in service delivery and savings they anticipated by commissioning this project.

“They in turn are being asked to explain to Councillors of SCC.”

Letts told DPAC that the emails made “disturbing reading” and later admitted that their “style and tone” was “not acceptable”.

But before DNS released the emails to DPAC and the council – with the permission of the whistleblower who leaked them – Letts had attacked the story as “false news” and said that Labour Party members who planned to protest should “know better”.

The protests against Capita have come as a DNS investigation continues into separate claims that healthcare professionals carrying out disability benefits assessments for Capita – and fellow outsourcing company Atos – have been guilty of widespread dishonesty in how they have compiled their reports for the Department for Work and Pensions.

Actvists who protested outside the council’s offices yesterday (Wednesday) said they believed the local authority’s actions had breached the Care Act.

And they called on the council to reinstate the support packages of everyone who has seen their care cut because of a Capita reassessment.

Tim Geering (pictured, at the protest), from Southampton DPAC, one of the organisers of the protest, called on Letts to consider resigning.

He said: “We wanted to lay down a marker today that DPAC and our supporters are going to put pressure on the council to restore the care packages of people who have had them taken away.

“We want an end to using contractors like Capita, who have an abhorrent record in their dealings with disabled people.”

Kathy, a council service-user who has not herself been reassessed by Capita, said she was concerned by the council’s contract with the company.

She said: “Without help, we wouldn’t survive. I am just concerned about the older generation who are too scared to voice an opinion.”

Bobby Noyes, president of Southampton Trades Union Council, told fellow protesters: “The information from the whistleblower potentially brings into question the legality under the Care Act of every person assessed by Capita.

“Our demand is for the council to reinstate all packages cut by Capita.

“We want to see the packages restored, to ensure people can have a dignified existence and not suffer the consequences of austerity.”

One disabled protester, Ba Lupton, said Capita were “just a rogue firm. They are just making millions out of tax-payers’ money.”

Independent councillor Andrew Pope, a former Labour council member, told DNS: “Social work in the city of Southampton has been in chaos for many years, whether Conservative or Labour.

“This is what happens when you don’t have control over what is happening in your offices.”

The whistleblower told DNS last week that Capita had piled pressure on its team of freelance social workers – while paying them more than £1,000 a week, after tax, and putting them up in three-star hotels – to cut care packages, on the council’s orders.

The council had employed Capita to clear a backlog of annual reviews of the care packages of disabled and older people.

The whistleblower said her bosses made it clear that team members would only keep their jobs if they produced enough cuts to the packages of the people whose care needs they were assessing.

Both the council and Capita have continued to deny there was any pressure placed on the social workers to cut people’s support packages.

A council spokesman said: “The style and tone of the emails to social workers in the review team is not considered acceptable and this has been addressed with the sender.”

He said: “The purpose of this project was to comply with the Care Act.

“The aim of the project was not to cut people’s care and support packages but to address a backlog of reviews.

“As the care packages had not been reviewed for over a year, it was anticipated that some would reduce.

“The reason for the project was to bring additional capacity to enable overdue reviews to be completed in a timely way.

“Social workers were not encouraged to recommend the reduction of people’s packages, but to carry out a thorough review of needs to ensure that care and support was appropriate and being delivered in accordance with the council’s adult social care and support planning policy.

“The locum social workers employed by Capita on the project were paid at rates that are consistent with the cap on social worker agency fees proposed by the Association of Directors of Adult Social Services for social workers with two years’ experience.

“The hotels used are booked by Capita at their contract rates for social workers who are working away from home.”

A Capita spokesman said in a statement: “Capita and its employees delivering this service have never been incentivised to deliver savings, and our overall contract performance is measured on the delivery of needs based assessments that ensure people are receiving the appropriate type and level of care as well as meeting the requirements of the Care Act (2014).

“We always encourage all of our employees to consider how our services to customers could be improved or delivered differently.

“However, in this case the employees’ idea was clearly inappropriate and they did not have the authority to suggest it, share it with the team nor action it.

“The scheme was never considered an appropriate proposal and was rejected outright.”