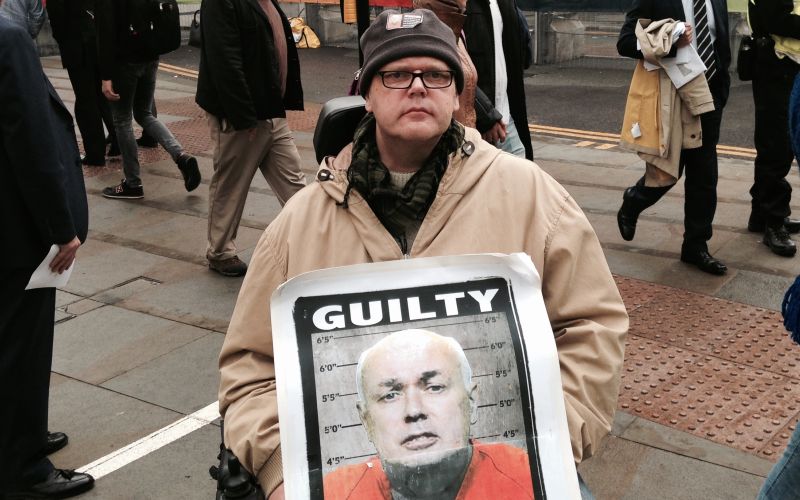 Disabled activists have given a muted welcome to the 20th anniversary of the Disability Discrimination Act (DDA) while some have criticised charities for trying to use the occasion to “further their own agendas”.

The DDA received royal assent on 8 November 1995, but was seen by many disabled activists at the time as a “watered down” version of the civil rights legislation they had been fighting for.

The Conservative government that brought in the act said in 1995 that its aim was to “end the discrimination which many disabled people face, and gives them rights in employment, access to goods, facilities and services and buying or renting land or property”.

But critics said the legislation failed to provide sufficient protection in transport and education and did not include measures to set up a commission to enforce the rights laid out in the act, something introduced later by the next Labour government through the Disability Rights Commission.

In Greater Manchester Coalition of Disabled People’s (GMCDP) annual report for 1995-96, the organisation said: “Important areas of our lives, such as transport and education, remain inadequately addressed, and there are gaping holes and ‘get-out’ clauses disguised as issues of reasonableness and high cost.”

GMCDP warned then that the “shameful” and “invidious” DDA “threatens to polarise the movement into those who will work with the government on implementing the Act and those who refuse to do so”.

But Anne Rae, a former member of the Union of the Physically Impaired Against Segregation (UPIAS), which is often credited with giving birth to the social model of disability in the 1970s, and herself a former chair of GMCDP, said the DDA was still “incredibly important”, if only because it “took into statute that disabled people were a discriminated-against group in mainstream society”.

She was one of the UPIAS representatives on a group set up by the big charities such as Scope and RADAR to push for disability discrimination legislation, although UPIAS pulled out when it became clear that “the charities’ opinion was that we were too precise about what should be in the bill”.

But Rae told Disability News Service (DNS) that the DDA was “very influential” at local authority level, with well-funded disabled people’s organisations which had “enormous input and influence” on councils’ disability policies, including improvements to access, the establishment of Dial-a-Ride services, and moves to implement independent living.

In a short film released by the Equality and Human Rights Commission (EHRC) to mark the 20th anniversary, the disabled crossbench peer Baroness [Jane] Campbell, one of those who protested on the streets for civil rights for disabled people, and was later both a DRC and an EHRC commissioner, says campaigners held “one massive party” when the act became law.

She says: “You have to remember, this had been 11 or 12 years hard campaigning by disabled people on the streets.

“We became full citizens. What can be better than that?”

She adds: “I suppose the DDA more than anything has given disabled people… confidence, self-belief and a greater sense of equality, and that’s got to be more important than anything else.”

Tracey Proudlock, who was a co-founder of the influential Campaign for Accessible Transport in the late 1980s and is now a leading disability consultant, said she was “very positive” about the DDA.

She said: “Maybe having the employment aspects come in first [through the original DDA] to road-test it meant we could legitimately say to the Labour government [post-1997], ‘This is how it is working, it’s nothing to be afraid of, and it should rightly be extended to other areas of life.’

“For me, it was a very big landmark, because we hadn’t had anything around rights before. It gave us status.

But some other prominent disabled activists do not feel as positive about the DDA as Rae, Proudlock and Baroness Campbell.

Brian Hilton (pictured), GMCDP’s digital campaigns officer, said: “The DDA was not what the majority were fighting for in the early 90s.

“We campaigned for a disabled people’s civil rights bill and not the watered down bill put forward by the government, which later became the DDA.”

He added: “The DDA was not the victory that some would have you believe, and if it was a victory, it was a shallow one.”

Another prominent disabled activist, Doug Paulley, said: “The DDA was incredibly important and we should be very grateful to the people who pushed for it, but it wasn’t the piece of civil rights legislation that we wanted and it has largely proven unenforceable.

“It is not as brilliant as the people who campaigned for it would have hoped it would be.”

Three months ago, Paulley published a guide to help other disabled people take legal action against organisations that discriminate against them.

He has taken more than 40 disability discrimination cases against service-providers in England over the last 10 years, originally under the DDA and then the Equality Act, but he said service-providers still give “largely no thought whatsoever” to their legal duties to make their facilities accessible to disabled people.

He said: “What’s the point of it being in the statute books unless it is enforceable? I am very unusual in being able to take these cases. Most disabled people would not have a chance in hell.”

Paulley, Hilton, Proudlock and Rae say they have been angered by attempts by non-user-led charities to associate themselves with the DDA and the activists whose efforts persuaded the government to legislate.

One of them, Scope, has marked the DDA anniversary with an exhibition at the People’s History Museum in Manchester – which includes films, photographs, badges, banners and leaflets – as part of its own project to celebrate “the campaigners and activists who made this kind of change possible”.

And when Leonard Cheshire Disability (LCD) announced last month that it had been awarded nearly £300,000 to research disabled people’s history, the Heritage Lottery Fund pointed out in an LCD press release that the 20th anniversary of the DDA was “the perfect time to uncover this largely hidden part of our history”.

Hilton said that LCD and Scope [which changed its name from The Spastics Society in 1994] securing support to “document our history and celebrate the 20th anniversary of the DDA” was “an insult to our movement” and “like giving UKIP a grant to celebrate multiculturalism”.

He said: “Both Scope and Leonard Cheshire have made millions off the backs of disabled people, incarcerated our brothers and sisters in their care homes and residential special schools, perpetuating the myth that as disabled people we were too weak and pathetic to speak on our behalf or that we needed them.

“Some would say that such charities have changed beyond recognition and are now our allies, but I would not be one those people.

“Where were they when the Independent Living Fund was closing?”

Proudlock accused Scope of being “disingenuous and opportunistic”, and said: “At the time, they were one of the problems.”

She said very few disabled people in the 1980s who were part of the disability movement in the 1980s would have seen Scope and Leonard Cheshire as “allies”.

She said: “It’s almost as if [Scope] have sanitised their own history. They were not really part of the solution, they were often part of the problem.

“I am disappointed that they have jumped on it and seen it as an opportunity to talk about themselves again.”

She added: “Scope have tried to say [the exhibition] is about respecting the people and the campaigners, but the people in the pictures would turn in their graves.”

She said: “They should know better than to even ask for that money. It’s incredibly bad taste, bad form and bad attitude.”

Paulley, who lives in an LCD residential home and has campaigned for years to expose the charity’s failings, pointed to the celebration of slogans such as Nothing About Us Without Us in the Scope exhibition.

He said: “Charities suck up the language and devalue it and disempower it.

“Their campaigns are fairly transparently furthering their own agenda. I think it’s fairly disingenuous.”

Paulley said it worried him that charities appeared to be “claiming credit” for the DDA.

Rae criticised the “lying, distorted claims” of the big charities, and said: “It should be a given by now that the big charities will start the wheels of their PR machines turning whenever a significant, and possibly celebratory, date relating to disability landmarks is reached, to claim playing a major part in ‘making it happen’.”

So angry was GMCDP at the LCD lottery award that it re-published a controversial article written in 1986 by disabled activist Ken Davis, which drew links between the dropping of a nuclear bomb on Nagasaki in Japan in 1945 – at which Leonard Cheshire, the charity’s founder, was an official British observer – and the damage caused by the “mass incarceration of disabled people in a chain of segregated institutions” by LCD.

Meanwhile, the Conservative architect of the DDA has spoken to a Tory website about his memories of the events that led to the act.

In an interview with Conservative Home, William Hague, the minister for disabled people responsible for bringing in the act, said he had visited the US after his ministerial appointment to study the Americans with Disabilities Act, and had sketched out the framework for the DDA on the plane on the way home in September 1994.

He says: “On the right of politics, of course we are opposed to excessive legislation. But on the other hand, we are in favour of equality of opportunity.

He also reveals that right-wing ministers such as Michael Portillo and Peter Lilley supported the bill – as did the prime minister, John Major – while some of those on the left of the party, like Kenneth Clarke and Michael Heseltine, were initially “not keen on this legislation” because they were “determined to avoid more regulation”.

Hague says in the interview that he believes the DDA “pushed along the change in attitude to disabled people”.

But he admits that he was not able to persuade the party to introduce a “rights commission” to enforce the rights laid out in the act, which was why he claims he was forced to block the rival civil rights (disabled persons) bill introduced by the Labour MP Harry Barnes.

The Barnes bill had the overwhelming support of disabled campaigners and their organisations, was more comprehensive, and offered a more “social model” definition of disability.