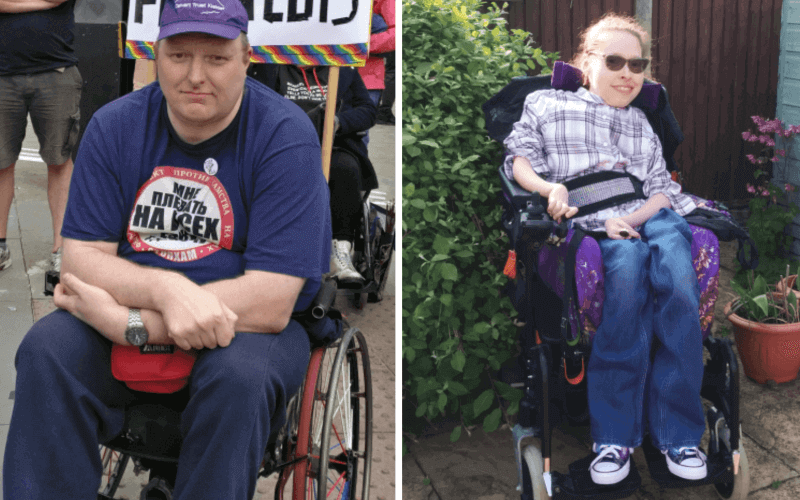 Two disabled campaigners who have spent most of the pandemic shielding are set to take legal action against the government, after the prime minister’s confirmation that he was ending the legal requirement to self-isolate after a positive COVID-19 test.

Fleur Perry and Doug Paulley are both considered clinically extremely vulnerable (CEV) to the virus and believe the move to end mandatory self-isolation in England from today (Thursday) puts disabled people at “needless risk”.

They have already passed the halfway mark of an £8,000 crowdfunding target to fund their legal action.

Since March 2020, Perry has visited only five indoor locations, two of which were for medical reasons, and has not seen most of her family and friends for two years.

She believes the government’s decision to end the self-isolation requirement for those with Covid will further restrict her life, as there are likely to be many Covid-positive people sharing public spaces with her.

Paulley, who regularly uses public transport, believes the increased circulation of COVID-19 in the community, with no requirement to self-isolate, will place him – and fellow residents of his care home – at greatly increased risk, and significantly restrict his movements.

This week, their solicitors at Rook Irwin Sweeney sent an urgent letter warning the government of possible legal action in connection with its “discriminatory and irrational” decision.

Perry and Paulley believe the government failed in its duty under the Equality Act to consult with disabled people before making the decision on self-isolation, and to consider what measures could have been taken to lessen the impact of the move.

They believe there has been “a complete failure to have due regard to the needs of disabled and CEV people”.

They want the government to withdraw its unlawful new plan, carry out an equality impact assessment on the future removal of COVID-19 restrictions, and apologise to disabled and CEV people for the “distress and anxiety” the government’s actions have caused them.

They have already sent one letter to ministers warning that a legal challenge would follow if the plans to end the self-isolation law went ahead, and stating that it was “unclear upon what data or scientific basis the decision was being made”.

They say the government’s decision to end the legal requirement to isolate puts them and another 3.2 million CEV people who have been shielding at huge risk, for example in schools and workplaces and public places, at a time when the number of new positive tests per week is still nearly 290,000 across the UK.

They believe that those most at risk from the government’s decision will be disabled people, particularly disabled women, just as they have been throughout the pandemic.

They said: “Restrictions are being lifted one by one, but the safety of those most at risk isn’t being discussed.

“Ending isolation early will increase the risk to disabled people, and cause avoidable hospitalisations and deaths.

“We want to call out the government for ignoring disabled people, and make sure they find and look at all the data on the safety of disabled people.”

Their efforts have drawn strong support from other disabled people and allies who have contributed to the crowdfunding bid.

One said, on the crowdfunding site: “High risk wheelchair user with a high risk child, shielding for two years, I won’t feel safe at needed hospital appointments if staff and other patients are untested and infectious.

“These are the only places we have been for two years. Our lives should count.”

Another said: “Thank you so much for what you’re doing! Signed, A CEV immunocompromised medical student.”

A third disabled supporter wrote: “Ending isolation will make it too dangerous to leave my home. Thanks for doing this.”

Another, who said they could not add their name because they were a civil servant, said: “Thank you for organising this. Lockdown and restrictions also have effects on disabled people but all disabled people need to have their needs considered when making decisions affecting the lives of the whole country.”

In a statement to MPs on Monday, the prime minister, Boris Johnson, said that “those who would wait for a total end to this war before lifting the remaining regulations would be restricting the liberties of the British people for a long time to come”, and that the government “does not believe that is right or necessary”.

He said restrictions placed “a heavy toll on our economy, our society, our mental wellbeing, and the life chances of our children, and we do not need to pay that cost any longer”.

Johnson said the government would “continue to protect the most vulnerable with targeted vaccines and treatments”.

Johnson later agreed with Conservative MP Lee Anderson that the country “should never return to a full lockdown” and that any future isolation should be targeted at “the clinically vulnerable” and older people.

After 1 April, the government will no longer even advise people who test positive to stay at home, but instead will encourage them to “exercise personal responsibility”.

On 1 April, the government will end free testing for the “general public”, although Johnson said the government would continue to provide free tests to “the oldest age groups and those most vulnerable to Covid” who have symptoms of the virus.

Perry said the combination of an end to both free testing and self-isolation rules was “very disappointing”.

“The emphasis on keeping yourself safe by limiting activities to avoid catching the virus, as opposed to those most likely to spread it carrying a share of responsibility, is something we’ve seen multiple times during the pandemic, and it’s leading to the spread of some worrying attitudes.

“I have been asked in different ways: ‘Why should we do anything for you? Why can’t you just stay safe at home indefinitely?’ with ‘you’ referring to anyone who was previously asked to shield.

“I remind them that they’re asking 3.2 million people to give up their lives or put themselves at risk, and that we’re not going to get the world we want working via exclusion.

“The government need to take the risk to disabled people seriously, and show that they have followed a decision-making procedure that is lawful and considers the needs and views of disabled people.”

New government guidance for England, also published on Monday, focused – in its section on “protecting people most vulnerable to COVID-19” – on access to vaccines and treatments, and continuing access to free personal protective equipment (PPE) for the adult social care sector in England.

The Department of Health and Social Care said yesterday (Wednesday) that it was unable to comment on ongoing legal proceedings.

Meanwhile, the prime minister’s announcements contrasted with those made on Tuesday by Scotland’s first minister, Nicola Sturgeon.

She warned that COVID-19 was “still a public health risk” and so lateral flow and PCR tests for those with Covid symptoms would remain free.

She said that those who test positive for Covid would continue to be told to isolate, with the Scottish government continuing to make self-isolation support payments available to those eligible.

Sturgeon said that “isolating when positive with a highly infectious virus [and follow-up tracing] remains one of the most fundamental public health protections that we have available to us” which “provides protection for those most at risk of serious illness from COVID, enabling them to return to more normal lives too”.