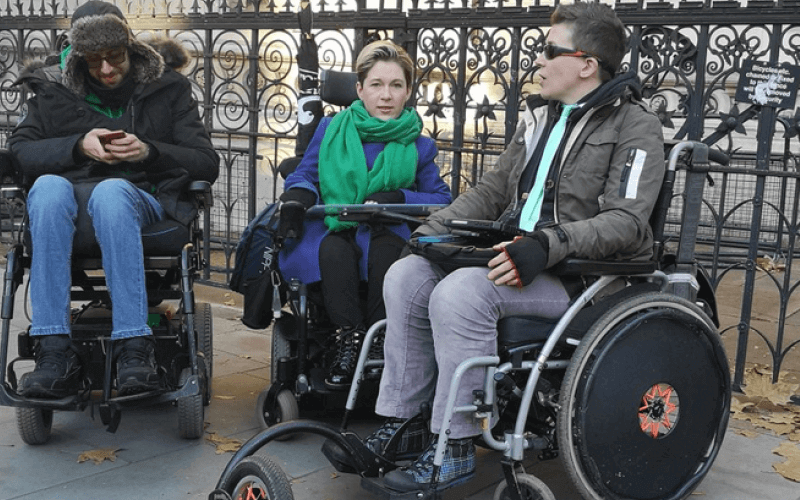 Two disabled campaigners were at the high court this week to challenge the government’s refusal to ensure that all disabled people can safely evacuate from high-rise blocks of flats in emergencies.

Following the two-day hearing, Georgie Hulme and Sarah Rennie said they remained “resolute” in their fight for “meaningful measures to help everyone move away from fire or evacuate a burning building”.

Their case follows the inquiry into the Grenfell Tower fire, in which those who died were disproportionately disabled people.

But the government later rejected the Grenfell Tower Inquiry’s recommendation that all owners and managers of high-rise residential buildings should be forced to prepare a personal emergency evacuation plan (PEEP) for all residents who might find it difficult to “self-evacuate”.

That rejection – on the grounds of “practicality”, “proportionality” and “safety” – came despite a promise from prime minister Boris Johnson that he would implement all the recommendations from the inquiry’s first phase.

The government’s rejection of the PEEPs recommendation came even though those who responded to a consultation on the proposal overwhelmingly supported their introduction.

The Home Office consulted instead on its own “alternative package” of measures, which it calls Emergency Evacuation Information Sharing Plus, which does not go as far as PEEPs and will only apply to the minority of buildings that have been assessed as being “at higher risk”.

Georgie Hulme and Sarah Rennie, co-founders of the disabled-led leaseholder action group Claddag and both of them wheelchair-users who live in high-rise buildings, were this week asking the court to rule that the government’s rejection of PEEPs was unlawful.

Rennie and Hulme believe the Home Office decision to reject the PEEPs proposal breaches its duty to protect life, and its duty not to discriminate against disabled people, under the European Convention on Human Rights, as well as the government’s public sector equality duty under the Equality Act.

They also believe the consultation process on the PEEPs proposal was unfair because the Home Office later held follow-up meetings with representatives of local authorities and housing associations, allowing them to raise concerns to which Claddag and others had no chance to respond.

And they believe that the Home Office failed to understand the inquiry’s reasons for recommending the PEEPs proposal.

Rennie and Hulme told Disability News Service this morning (Thursday): “We are resolute in our position.

“We didn’t hear anything at the hearing that gives us reason to believe that the Home Office are ‘open’ to consultation on any meaningful measures to help everyone move away from fire or evacuate a burning building.

“We would like to thank our legal team and everyone who has shown us support in this legal challenge.

“This includes contributions to our crowdfund from the disabled community, allies and the Law for Change fund.”

The Home Office said yesterday that it would be inappropriate to comment on an ongoing court case.

But a Home Office spokesperson said: “We are committed to delivering proposals that enhance the safety of residents whose ability to self-evacuate in an emergency may be compromised.

“Our public consultation on Emergency Evacuation Information Sharing Plus sought views on the scope of evacuation plans and we are currently analysing the responses.

“A research team is now completing the evaluation of the evacuation strategy tests.”