You are here: Home / Independent Living / Disabled peer calls for pressure on MPs to accept improvements to care bill 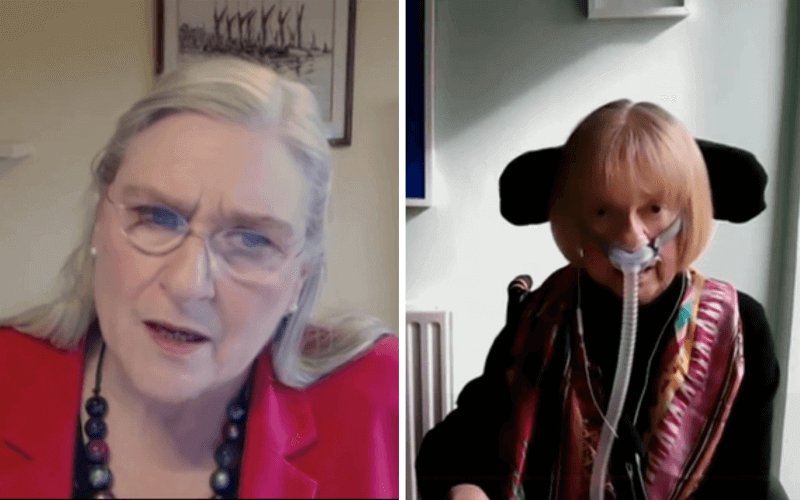 A disabled peer has appealed to disabled people and their organisations to pressure MPs to accept changes to the government’s health and care bill that offer “a better, fairer” system of care charges.

Baroness [Jane] Campbell spoke out after she warned fellow peers this week that the government’s bill could lead to increased poverty and ill-health for disabled people, and that some would “undoubtedly” die.

Her intervention in the Lords helped convince peers to vote narrowly in favour of a Labour amendment which would ensure that no-one in England under the age of 40 would have to pay for their care and support.

Baroness Campbell, a crossbencher, had worked with Labour peers to ensure that the amendment “would go some way to alleviate the financial crisis that working-age disabled people face with the current system and the system proposed by the government”.

The government’s much-criticised proposal for a cap on charges in England – widely seen as regressive and unfair – is set to introduce an “extortionate” lifetime cap of £86,000 on how much anyone pays for care, but it would not have counted financial contributions made by local authorities to people’s care and support.

But on Tuesday, an alliance of crossbench, Labour and Liberal Democrat peers – and one Conservative – ensured Labour’s amendment was passed by 160 votes to 151.

This means the bill currently counts contributions by councils, prevents any charges being imposed on adults who are under 40, and ensures there is an assessment of the impact of the government’s plans on disabled people under 40 before they can be introduced.

Because of parliamentary rules that mean a previous amendment cannot be brought back at the current “ping pong” stage of a bill, Labour’s amendment was not as strong as a previous bid to improve the legislation for working-age disabled people.

That amendment, proposed by crossbencher Baroness [Deborah] Bull, former creative director of the Royal Opera House, would have ensured that no-one in England who entered the social care system before the age of 40 would ever have to pay for their support.

But Baroness Campbell told fellow peers that the Labour amendment would still “ease the catastrophic effects of the government’s proposed charging cap reforms on the lives of those dependent on social care”.

She said: “This is a bleak time to endorse charging for social care, capped at an extortionate £86,000.

“Hundreds of thousands of disabled people in Britain are in crisis because of the ever-increasing cost of living.

“Local authorities in England are imposing stricter charging policies for care because they are basically running out of money.

“Disabled people are already being referred to debt collection agencies because they cannot pay their care charges.”

She added: “The government talk about levelling up for disabled people, but really they are doing the opposite.

“These charging reforms force them to contribute to their care and stop local authority care costs counting towards the cap.

“They deny disabled people the life opportunities that others take for granted.”

She said that the bill as it stood – without the amendment – was “defying the principles” of the UN Convention on the Rights of Persons with Disabilities, which “recognises the equal right of all disabled people to live in the community, with the same choices as others”.

She added: “Far from ensuring the rights enshrined by the convention, I fear the bill will lead to increased poverty, ill-health and poorer life outcomes for disabled people. Some will undoubtedly die.

“What does that say about our moral compass, especially when disabled people have already endured two years of disproportionate suffering and death during the pandemic?”

Baroness [Sal] Brinton, the disabled Liberal Democrat peer, said the government’s proposals would “leave poorer, older people and working-age adults with less protection from the catastrophic care costs than others who are wealthier”.

She said: “It is still a disgrace that the arrangements for older people, which assume decades of working and earning, are also used for younger adults with disabilities, who we know are much more likely to be assets- and savings-poor and to need care and support for much longer, and who will therefore accrue much higher levels of cost than older people.

“These proposals from the government are just not fit for purpose and need to be reviewed for this group of younger adults.”

The junior health and social care minister Lord Kamall had argued that the government’s plans were “the only affordable plan on the table”.

He added: “It is also the only fair plan on the table, ending unpredictable care costs for everyone by introducing the £86,000 cap on an individual’s personal care costs.”

He said that changing the government’s plans for the care cap would be “fundamentally unfair”.

He said: “It cannot be right that two people living in different parts of the country, contributing the same amount, should progress towards the cap at different rates based on differences in the amount their local authority is paying.”

He said that the Labour amendment would “result in additional cost”, including the “additional funding” needed to provide free care for disabled people under 40.

The amendment was one of several defeats for the government on the bill, which will now return again to the House of Commons, after MPs return from their three-week break on 19 April.

After the vote, Baroness Campbell praised allies in the Lords who had “worked tirelessly over the last few months in their attempts to persuade the government to reduce the catastrophic financial hardships faced by those who use social care services”.

She told Disability News Service that they had shown that the government’s social care charging cap was “deeply unfair and will disproportionately affect the lives of working-age disabled people, rendering their life chances minimal”.

She called on disabled people’s organisations and disability charities to appeal to MPs in the next few weeks to “carefully consider why the Lords have rejected the government’s proposals and why they must ask for a better, fairer charging settlement”.

She said: “This is your last chance to influence the legislation which will deeply affect disabled people’s ability (or not) to live independently and thrive.”

Picture: Baroness Brinton (above left) and Baroness Campbell speaking during the debate