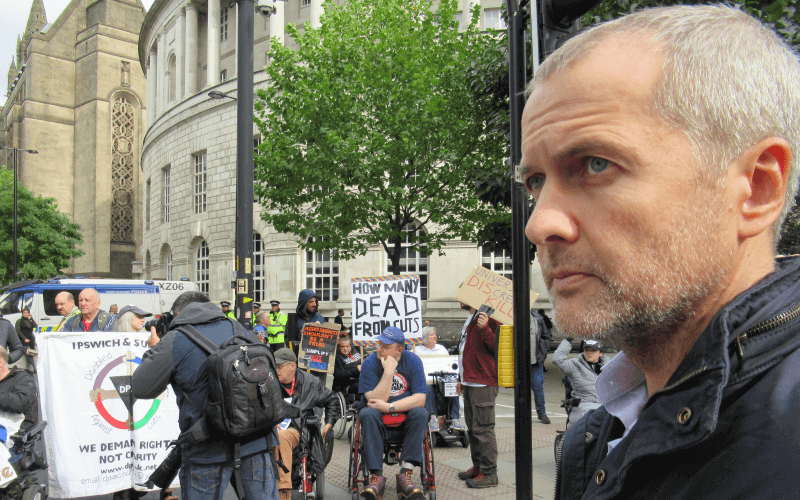 A regulator has sided with the Department for Work and Pensions (DWP) by ruling that an attempt by Disability News Service (DNS) to obtain more than 90 secret reviews into deaths linked to DWP’s actions was “vexatious”.

Information commissioner John Edwards has agreed with DWP that preparing and releasing 99 secret reviews that were carried out between 1 September 2020 and 28 April 2022 would have placed a “grossly oppressive burden” on the department.

DWP has a £6 billion annual budget.

Edwards announced his decision despite ruling last month that DWP had unlawfully blocked the release of an earlier, smaller batch of so-called internal process reviews (IPRs).

DWP has argued that the attempt by DNS editor John Pring (pictured) to secure the 99 IPRs was vexatious because it either caused “distress or irritation without justification” or was “aimed at disrupting” the department’s work.

Pring confirmed this week that his only intention was to secure redacted copies of the IPRs, so that DWP could be held accountable for its continuing failings and – crucially – so efforts could be made to check if recommendations made in the reviews had been implemented.

DWP appears to have convinced Edwards that the “burden” of preparing the IPRs was “grossly oppressive” by exaggerating the work needed to prepare them for release to DNS.

Each of the IPRs is between four and 10 pages long.

Because most of the content of each IPR needs to be redacted before it can be released, DWP argued that it would have taken a total of 25 working days to prepare the 99 documents for release.

DWP told the commissioner that some of the time needed was to check that none of the recommendations could impact the development of government policy if they were released, an excuse the information commissioner has already dismissed in relation to other IPRs in last month’s ruling.

DWP also argued that each report “would be likely to contain little or no information that could be released and would be out of context and have minimal value to the public”.

Pring said this week that the information would instead be crucially important and would allow journalists and campaigners to ensure that DWP did not ignore the recommendations made in the reviews, and to confirm that it was taking steps to prevent the loss of further lives.

The commissioner himself ruled last month that there was “a strong public interest in understanding DWP’s approach to preventing future errors and safeguarding issues”.

But he has now ruled in favour of DWP even though the information rights tribunal ruled six years ago that DWP acted unlawfully by refusing to release redacted versions of IPRs [previously known as peer reviews] to Pring.

The information commissioner states in this week’s decision notice that the information that could be released by DWP – mainly the recommendations made in each IPR – was “disproportionately small” and so DWP was entitled to view Pring’s request as “vexatious”.

The commissioner stated that Pring could submit a fresh request that seeks only the recommendations, rather than redacted versions of the IPRs.

This new request has already been submitted by DNS, but Pring said he believed the commissioner had made significant errors in his decision notice.

He said: “Because DWP releases so little information about the deaths caused by the systemic flaws in the social security system, it is vital that the government should not be allowed by the regulator to chip away at the scant details we are currently able to access.

“It is of deep concern that the information commissioner has weighed up the vital details about IPR recommendations that have been obtained through freedom of information requests and seems to value that so lightly.”

Dr China Mills, leader of the Deaths by Welfare project* at Healing Justice Ldn, and a senior lecturer at City, University of London, said the IPRs “should be public, without question”.

She said: “If these reviews are, as the DWP claims, ‘learning tools’, then we all need to know what was learned and how that learning is being put into action to change a system that is currently killing people.

“What is publicly known about IPRs (and peer reviews) is almost entirely the result of disabled people’s campaigning and the tireless investigations by DNS.

“Leading the Deaths by Welfare project, at Healing Justice Ldn, we know from the families of some of those who have died that having access to an internal process review can be an essential part of healing – a healing that is being denied to the majority of bereaved families.

“If being vexatious is causing ‘distress or irritation without justification’ then the DWP know a lot about this – evident in the incalculable distress they have caused to people entitled to benefits and to the families of those whose deaths are linked to DWP practices.

“Refusing to release these reviews is yet another example of the DWP’s many tactics to deny their accountability in creating a system that harms and kills people.”

The release of recommendations from peer reviews [which were renamed IPRs in 2015] and IPRs has revealed key safety failings by the department in the years to 2019.

But because DWP has stopped releasing IPRs, it has so far not been possible to check whether it has ignored recommendations made in the last four years.

The first batch of reviews, finally released in 2016 after a lengthy freedom of information battle between DWP and DNS, showed how at least 13 of 49 reports explicitly raised concerns about the way that “vulnerable” benefit claimants were being treated by DWP.

Another review obtained by DNS, in 2018, helped show how DWP had been forced to soften the “threatening” tone of the agreement that claimants of universal credit are forced to sign to receive their benefits.

And in December 2020, DNS was able to show that DWP staff had had to be repeatedly reminded what to do when claimants said they may take their own lives, following reviews into as many as six suicides.

Those reviews suggested that a series of suicides between 2014 and 2019 were linked to the failure of DWP staff to follow basic rules that had been introduced in 2009.

Pring said: “It should be part of standard DWP procedure to prepare a redacted version of every IPR it prepares.

“There is overwhelming public interest in seeing where DWP’s own secret reviews have called for improvements after the death of a benefit claimant, and to see that information in as much context as possible.

“No matter how many times DWP – and the information commissioner – categorise my efforts as vexatious, I will continue to seek the publication of as much detail from these reviews as it is possible to obtain.”

*Pring is co-creator of the Deaths by Welfare timeline