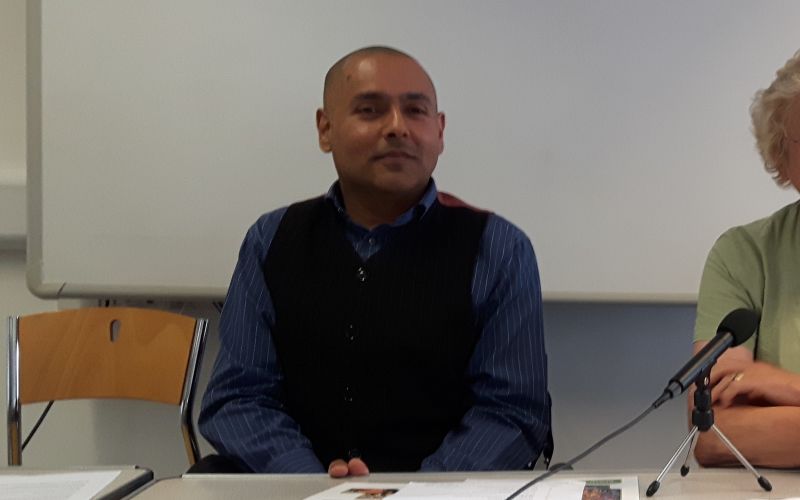 The new boss of Disability Rights UK (DR UK) has pledged to do more to involve young disabled people in the organisation’s work, and improve its relationships with other disabled people’s organisations (DPOs) and grassroots campaigning groups.

Kamran Mallick (pictured) took over as chief executive of the national, pan-disability, user-led organisation this month, following the retirement of Liz Sayce.

His previous job was as chief executive of Action on Disability (AoD), an organisation he helped to double in size over nearly 13 years in charge.

He says he has already been made “very much aware” by other disabled people since his appointment of concerns that DR UK had grown too close to the government.

But in his first major interview since his appointment, he has told Disability News Service that he has no plans for DR UK to stop engaging with government.

He said: “We found a working pattern where HAFCAC were the vocal group within the borough and what AoD and I were doing was listening and supporting that group but [also] working round the table with the local authority.”

He said it was a “balancing act” to be trying to influence the council and yet also “show people round the table the viewpoint I was coming from and the injustices of the impact on equalities and things that were happening to disabled people”.

That dual approach with HAFCAC appeared to work.

As HAFCAC’s Kevin Caulfield told an event held to launch new research on personal assistance earlier this month, Hammersmith and Fulham council has abolished charging for care services, ringfenced the funding disabled people had previously received from the Independent Living Fund, and set up an independent review of the decision by a previous administration to scrap the direct payments support service.

But Mallick said there had to be a limit to working closely with government, or other organisations.

He said: “It’s important to remember there is always a line that we draw where you say, ‘This is my line and I won’t cross that,’ where things are being done that are fundamentally wrong.

He is unwilling to say yet what those red lines might be, but he is clear about some of the areas where he believes the government has been wrong over the last seven years: the move from disability living allowance to personal independence, the closure of the Independent Living Fund, cuts to employment and support allowance, cuts to social care, and cuts to the government’s Access to Work programme.

He said: “I am aware of some of the criticism levelled at DR UK and people have felt since they heard I was joining that they wanted to tell me those criticisms, and so absolutely I will be looking at those.

“I do want to understand what the criticisms were, what the substance of that was, our position, DR UK’s position, and whether or not we would change that.”

He said it was too early to say too much about how DR UK might change under his leadership, but he stressed that he wanted to build closer relationships with other DPOs and see the organisation work more closely with younger disabled people.

There was also a hint – but no more – that he might take a tougher line on some issues, although he was clear that he wanted to continue to engage with the government.

He said there might be a change of approach from DR UK on some key issues, and was “keen” to examine DR UK’s stance on some of those areas.

Like Liz Sayce before him, he will draw in his work on his own lived experience as a disabled person.

In his case, he spent his early years in a special school, before his parents managed to convince the local authority to transfer him to a mainstream school at the age of 14, just before he started his GCSEs.

But that led to further barriers, both at school and afterwards, as he tried to build a career after graduating with a degree in business studies.

After his A-levels, he made the decision to move away from home so he could live independently, and studied for his degree part-time while he worked with Hounslow council’s social services team in its performance improvement unit.

This was followed by a year’s secondment with a local DPO, and a move to the spinal injuries charity Aspire, where he headed a national IT and training programme, before moving to AoD.

While he joined AoD (or Hammersmith and Fulham Action on Disability, as it was called at the time), the organisation had a turnover of about £400,000, with much of this coming from the local authority.

He focused in his time in charge on “creating a diversified portfolio of income sources and on growth”, and by the time he left, the number of staff had doubled from 12 to 24, and the turnover had trebled to £1.2 million, with local authority grants just five per cent of that.

Four years ago, he changed the organisation’s remit to allow it to work across Greater London, so he could expand its employment service.

Even though the council stopped funding its benefits advice service, he kept it going through funding from trusts and the use of AoD reserves.

He leaves AoD at a time when his work on supported internships for young disabled people – which saw employment success rates of as much as 70 per cent – has just been recognised with a huge City Bridge Trust grant for Inclusion London to build on its work.

The model he developed grew over seven years, from working with one private sector multi-national at the start to now working with six private and public sector organisations, offering 50 internships, with about 70 per cent of those young disabled people in work at the end of the year.

Mallick believes it was the time he spent at AoD that has equipped him for the DR UK job, learning about both the barriers faced by disabled people and their positive attitudes to those barriers, and working with the local authority and local disabled activists to produce “positive change”.

He said: “I found what I regard as very innovative solutions to some of the barriers people were facing.

“I then changed the remit of that organisation (AoD) to be more regional rather than just one borough.”

Now he says he wants to bring that knowledge and experience to a national organisation and “use that to influence what I hope I can do here”.

His immediate priority is to learn about DR UK “and the broad spectrum of the areas that it is trying to work in, where it is being successful, where there is room for improvement”.

DR UK, he said, is “led by disabled people, it’s user-led, so it has an incredibly important part to play.

“I see it as being representative of disabled people across the country and ensuring we are listening to disabled people about what’s going on for them in terms of equality and rights nationally.

“The thing I really want to do is ensure we remain relevant, and do that by encouraging young people to come in, and for us to start listening to young people” and “bring young disabled people’s voice into the work of DR UK so that they can influence what DR UK is about and what it does and focuses on in the future”.

He contrasts this aim with his own upbringing as a young disabled man, when he had no contact with any disability organisations other than when he was attending a special school.

He also wants to “bring DR UK closer to DPOs, so that we continue to hear from DPOs who are doing the frontline work, who are doing the day-to-day, who are experiencing what is going on locally, because that is where I have come from.

“I have come from a DPO that I grew. I am very proud of that and I want to not lose connections with DPOs.

“I think that’s something that would be of strength to the organisation so it has support from DPOs in what it is doing and saying.”

This hope for closer working relationships also applies to grassroots organisations such as the Spartacus Network and Disabled People Against Cuts.

He said: “I think it’s important to have relationships with those groups because they have a view, they have an opinion.

“They have things that they want to be heard and I think it’s important that we do hear that voice and we do not cut that voice out.”

He said he almost fell into the disability sector, forced into that area because of the barriers he faced while trying to find a mainstream job with his business degree, having “endless interviews” and “never really getting anywhere”.

He “absolutely” sees this as discrimination, with employers “making assumptions about me based on how I looked as a wheelchair-user, people’s pre-conceived ideas of me, what I can and cannot do.

“At that point, at a younger age, they [disability discrimination] weren’t the words I would have given it at that point because I didn’t have those words, but now looking back on it, absolutely, they were very much the barriers we all talk about that disabled people face.

“So I experienced all those through schooling, in education and then in trying to find work and build a career for myself.”

His schooling, he said, was a “very mixed experience” that he “would not wish on anyone”.

He moved from being “looked after and almost cared for” at a special school, where although he made friends there was no formal curriculum and he did not feel he was learning or being challenged, to a mainstream school where he “enjoyed the challenge of learning” but faced bullying.

He wanted to study physics, but the physics lab was up a flight of stairs, so he had to take a bus to another school for his physics lessons.

He said: “My experience has helped form my belief in inclusive education as the right way to be educated at all ages.

“I had huge challenges there, but that’s part of what built my character today.”