You are here: Home / Benefits and Poverty / EHRC failed to consult its own disabled advisers before snubbing DWP deaths probe 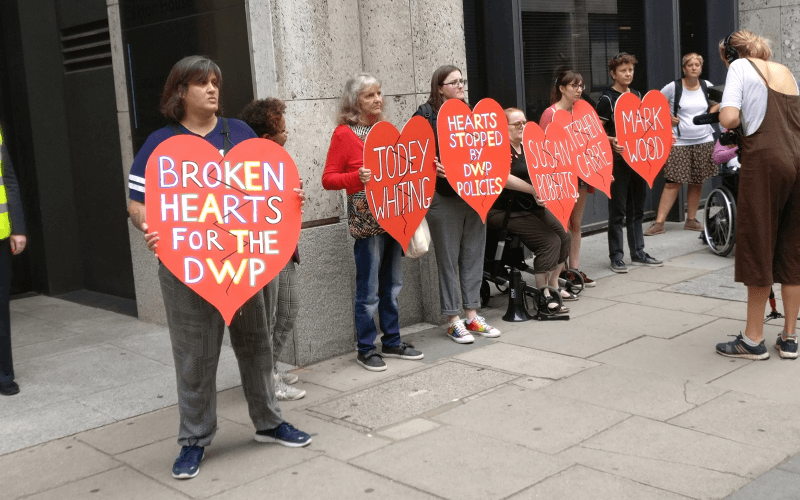 The equality watchdog failed to consult its own committee of disabled advisers before deciding not to investigate deaths of benefit claimants that have been linked to the Department for Work and Pensions (DWP).

It came as disabled activists and relatives of disabled people whose deaths have been blamed on DWP’s actions and policies expressed anger and frustration at the failure of the Equality and Human Rights Commission (EHRC) to act.

Last week, Disability News Service (DNS) reported how EHRC had delayed a decision for more than a year on whether to launch an inquiry into links between DWP and the deaths of claimants, and the wider impact of DWP’s policies on disabled people.

It then decided – apparently only last week – that it would not hold such an inquiry this year, and blamed the disruption caused by the coronavirus pandemic.

This week, there have also been questions over the commission’s impartiality after Newsweek revealed that one of its commissioners, Pavita Cooper, had donated money to a Conservative MP and helped organise a fundraiser for her in 2013, but then failed to mention this when she was appointed as an EHRC commissioner five years later.

The commission was first approached in April 2019 by Labour’s Debbie Abrahams, a former shadow work and pensions secretary, with her concerns about the links between DWP and the deaths of claimants, and the wider impact of DWP policies on disabled people.

It took until last week for EHRC to announce that it had now decided that – “due to the pandemic” – it would not be able to hold an inquiry, at least not this year.

But DNS has now discovered that the commission failed to consult its own disability advisory committee before reaching this decision.

Committee members contacted by DNS declined to comment on the decision.

But one member told DNS: “I wasn’t aware the Commission was considering this – it isn’t something that’s come to the Disability Advisory Committee.”

DNS has been unable this week to contact the disability advisory committee’s chair, Rachel Perkins.

A spokesperson for Disabled People Against Cuts said: “Time and time again, DWP’s brutal and cruel benefit regime has been shown to lead people to their death, either by starvation, suicide, or despair.

“But nobody is prepared to support a call for accountability, no opposition MPs – apart from Labour’s Debbie Abrahams – who are supposed to oppose and challenge the government, not the EHRC, which is supposed to promote and uphold equality and human rights ideas and laws across the UK.

“Once again, disabled people are on their own, and have to fight their own battles, without help, support or acknowledgment of the price they have already paid and will continue to pay if nobody is prepared to stand up for their rights.”

The family of Errol Graham, who starved to death after his out-of-work disability benefits were wrongly removed by DWP, were also among those furious at the commission’s unwillingness to act.

She said: “The failures within DWP have been going on for years.

“The EHRC need investigating themselves for not only failing to do the one job that’s expected of them, but the poor excuse and failure to respond in reasonable time frames.”

Joy Dove, whose daughter Jodey Whiting took her own life 15 days after she had her out-of-work disability benefits mistakenly stopped by DWP for missing a work capability assessment, said the commission’s failure to launch an inquiry was “disgusting”.

She said: “Us bereaved families have suffered enough with the loss of our loved ones.”

She said the deaths caused by DWP take over the lives of the families of those who have died.

She said: “My life changed from the 21st of February 2017 when I and two of her children found Jodey’s body surrounded by suicide notes saying she could not go on any more. It was heart-breaking.

“DWP have a lot to answer for and EHRC gave us hope only to let us down. We want justice and I want it so much for Jodey. I won’t give in.”

She said: The pandemic is even more reason for doing this, as conditions for disabled people are increasingly difficult.

“The minister has announced that conditionality and sanctions will restart after the lockdown (see separate story) and there are no guarantees that the DWP has changed its behaviour for disabled people after the recent deaths.”

Ian Jones, also from WOW, said EHRC’s actions showed that “disabled people do not matter to the EHRC”.

A spokesperson for WinVisible, which supports and campaigns for disabled women, said EHRC “must push for an effective inquiry into benefit deaths”.

She said: “An inquiry does not bring our loved ones back, but it can bring out the truth of what led to people’s deaths and establish responsibility, starting with government policies and the ways they are implemented by staff.”

Ken Butler, welfare rights adviser for Disability Rights UK, said the EHRC decision was “a setback” and “not only incredibly disappointing but difficult to understand”.

He said: “The DWP, by its policies and practices, have been the cause of deaths of disabled claimants.

“The recent NAO report has also shown it is unable to police itself.

“It’s clear that the social security system discriminates against disabled people and this falls squarely within the EHRC’s remit.”

He added: “If the EHRC will not act, it’s vital the government establish an independent inquiry into those deaths of disabled people where it appears that the welfare benefits system has been a significant factor, with a remit to recommend changes to policy as well as internal DWP processes where needed.”

An EHRC spokesperson said: “The coronavirus pandemic has had a significant impact on our work, as it has on many other organisations.

“This has meant taking some very difficult decisions and due to the pandemic we will not be able to undertake this inquiry this year.

“The changes to our business plan to respond to the coronavirus crisis are a result of intensive discussion among staff, board and stakeholders; and on the basis of relevant intelligence and data mapping.

“Whilst agile, our process has been robust and proportionate and in no way undermines our impartiality.

“We have a strong track record of holding government to account and we take our independence very seriously.”

DNS asked why the commission failed to consult its disability advisory committee before deciding not to go ahead with the inquiry this year, but the EHRC spokesperson had not responded by noon today (Thursday).

On Cooper’s donation to the Tory MP, he said: “A donation was made at an event in 2013 to support a personal friend who was running as an MP.

“Pavita Cooper has not made a donation to any political party and is not a member of any party.