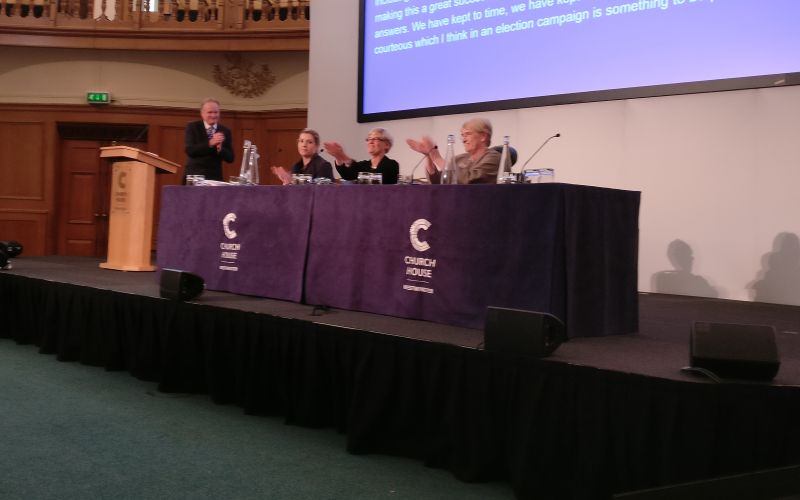 The Conservatives, Liberal Democrats and Labour have all spoken publicly – apparently for the first time in the general election campaign – about what their parties would do to address the social care needs of working-age disabled people.

Their comments follow concerns raised by leading disabled campaigners that the election campaign had focused exclusively on the funding of social care for older people, with all three parties ignoring the needs of younger disabled people.

Labour’s Kate Green (pictured, centre), a former shadow minister for disabled people, said there had to be “urgent action” because the social care system was “falling apart right now” as a result of nearly £5 billion in cuts to social care since 2010.

She said a new long-term system should recognise not just those with high needs but also that investments in even small amounts of social care “can produce big dividends and enable people to live independently for longer, and to work and participate” in society.

She said a Labour government would inject money “urgently” into the system while beginning the work to “put in place a long-term national care system”.

And she said that the needs of working-age adults had to be considered because they have the highest lifetime care costs.

She told Disability News Service (DNS) afterwards that working-age disabled people potentially have far higher lifetime care costs because they are spread over a longer period, while they have not had the chance to build up assets, as a retired person might have been able to.

Green said that some of the immediate injection of funding by a Labour government would help address the care charges being faced by working-age disabled people, which one disabled campaigner said last week was “almost out of control”.

She said: “The investment in working-age people is a matter of justice, obviously, but it’s also a matter of enabling their maximum participation in all aspects of society, and that’s obviously going to be for the common good.”

Baroness [Sal] Brinton (pictured, right), the disabled president of the Liberal Democrats, told the hustings event that her party would in the short term add one penny to income tax to fund increases in spending on health and social care “to help the current crisis”, which she said would produce about £7 billion.

The party would then wait for the conclusions of an independent commission on the long-term funding of health and social care, set up earlier this year by its health spokesman, Norman Lamb.

She said the Tories’ social care plans failed to recognise the needs of working-age disabled people, which she said was “a real problem”.

She said she had become increasingly concerned about local authorities that were saying that independent living arrangements for disabled people were now too expensive and instead were “looking at going back to hospital-like large home accommodation”.

She said this was a “retrograde step and we will bitterly oppose that and we will fight it, especially if it is being done for financial reasons”.

Baroness Brinton told DNS after the event that some of the extra short-term funding produced by the extra penny on income tax would help to reduce the care charges being faced by working-age disabled people.

Penny Mordaunt (pictured, left), the minister for disabled people, told the hustings that the Conservative party had “taken some tough decisions to move some of the responsibility for paying for care to the individual”.

The policy in the party’s manifesto revolves around allowing every older person to retain at least £100,000 of their assets and savings, while the value of people’s homes would now be taken into account – when calculating charges – for those receiving care in their own homes as well as those receiving residential care.

But following widespread criticism, the prime minister announced that there would also now be a lifetime cap on care charges.

Mordaunt confirmed the government’s U-turn, telling the audience that there would now be “a limit on the amount an individual has to pay”, although she said there would be a consultation to decide what that limit would be.

Mordaunt – who refused to be interviewed by Disability News Service – said that in order to pay for the necessary “step change” in the provision and quality of social care and to ensure that “all need is met”, the government has to “get more money into the system”.

Although she said she had been doing some work with the government’s joint health and work unit on “looking at social care for people of working age and support for independent living”, she gave no clue as to what ideas they had produced and what a Conservative government would do in that area.