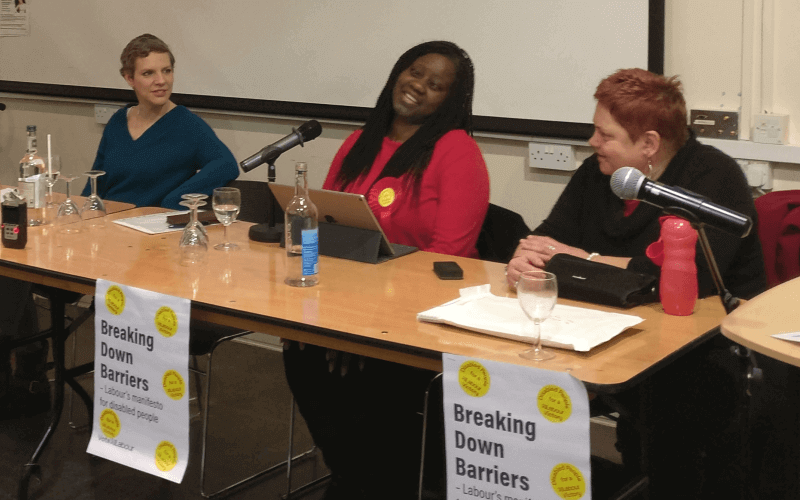 Labour has committed itself to moving back towards an inclusive education system if it wins power in tomorrow’s general election (Thursday).

The pledge was made by Marsha de Cordova, the party’s shadow minister for disabled people, at a pre-election rally of disabled Labour activists in central London.

It is one of the few times that inclusive education has been raised as an issue during the general election campaign, with none of the main parties highlighting it as a key issue in their manifestos or making anything other than a passing reference.

But De Cordova (pictured, centre, at the event), who was one of the few disabled MPs in the last parliament, said her party’s commitment to incorporating the UN Convention on the Rights of Persons with Disabilities (UNCRPD) into UK law meant a Labour government would “have to move towards an inclusive education system”.

She told the rally, organised by inclusive education expert and rights activist Richard Rieser, that she herself had benefited from special educational needs (SEN) support at a mainstream school.

And she said it was “wrong” that so many young disabled people were now being forced out of the mainstream education system, often into pupil referral units.

She said: “It’s a scandal that we are moving backwards towards segregated education.”

Rieser said the impact of government austerity on inclusive education over the last decade had been “totally disastrous”, while reforms introduced by former Tory education secretary Michael Gove had been designed to “pull up the drawbridge on the kids who were slow learners”.

He said the gap between the academic achievement of disabled and non-disabled students had grown significantly under successive Tory-led governments.

Rieser said a Labour government would put inclusivity at the centre of its education policy.

He said that Labour’s commitment to implementing UNCRPD would mean developing inclusive education and gradually ridding the system of segregation.

And he told the rally that the last decade had seen a “runaway increase in special schools, free special schools and grants to independent special schools to grow”, reversing the reduction in segregation that had been achieved under the last Labour government.