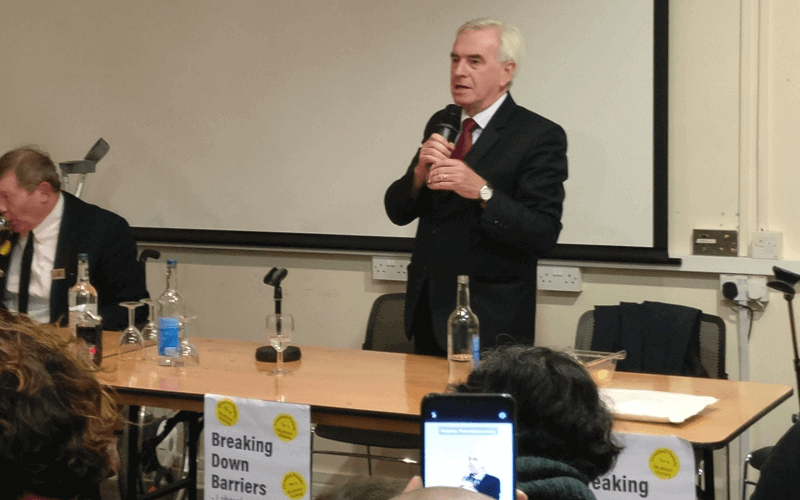 Disabled voters will tomorrow make the Conservatives pay for what they have done to them over the last decade of austerity, Labour’s shadow chancellor has told a rally of party activists.

John McDonnell told the pre-election rally of disabled Labour supporters in central London on Monday that activists had built a disability movement within the Labour party over the last 10 years which was so strong that it could not be ignored.

He said tomorrow’s general election was about disabled people “getting our own back” after 10 years of austerity and the repeated abuses of their human rights, as highlighted by the UN’s special rapporteur on extreme poverty and human rights.

McDonnell (pictured, speaking at the rally) told the rally that these abuses were “a bloody disgrace” and showed the “brutality of this current regime”.

He said: “They can’t ignore us because we won’t let them ignore us.

“All those demonstrations and occupations and public meetings and discussions, when we were in the face of people all the time, has worked.”

He said the Conservatives and their Liberal Democrat coalition partners thought in 2010 that they could target disabled people “and there would be no resistance”.

But McDonnell said: “What we have demonstrated over this near decade now is the fundamental resistance that we have organised.

“And on Thursday, I tell you, by our votes we will make them pay for what they have done.”

McDonnell, who has consistently supported the disabled people’s anti-cuts movement over the last decade, also promised again that Labour would work with disabled people if it formed the next government.

He said: “This is not going to be like anything in the past. It is not about electing a group of Labour MPs who we expect to go off and change the world.

“That will never happen. We will only succeed because we will all go into government.”

He said that the party’s disability movement would “go into government” alongside its MPs to both “sustain” that government and “radicalise it at every stage”.

Among the areas that have been impacted by austerity, he highlighted homelessness and the more than 700 homeless people who died in England and Wales last year (an increase of more than a fifth on the previous year).

He said that “700 of our fellow citizens died out there” and most of them would have been disabled people, who often had not had the mental health support they had needed.

McDonnell added: “We are the fifth richest country in the world, and we have 700 fellow citizens dying on our streets. What does that say about the values of this government?”

He said a Labour government would launch – on its first day in office – a programme of support for homeless people, while it had also set aside “significant sums” for their mental health support and would start a huge house-building programme and “will be proud to call those homes that we build council houses”.