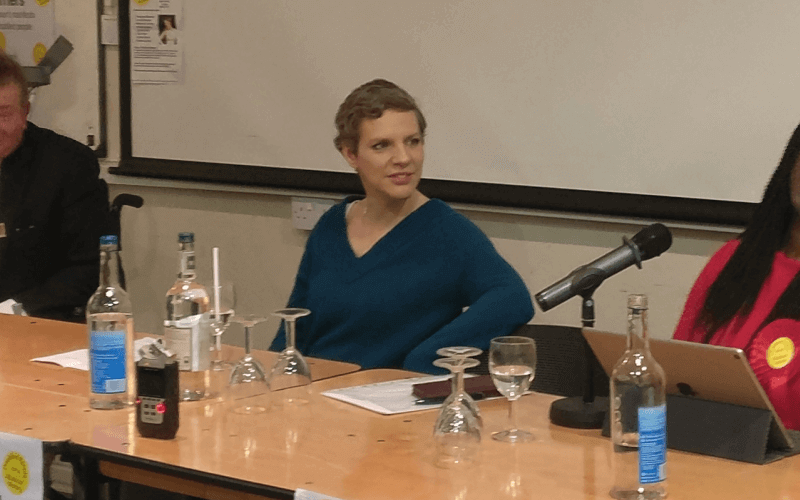 The Conservative party wants the UK to follow America into becoming a “dog-eat-dog culture” where there is no support for disabled people, a comedian and activist has told a pre-election rally.

Francesca Martinez, who was speaking at a rally of disabled Labour supporters in central London on Monday, said her recent personal experience of the disability benefit assessment system had been “frustrating” and “humiliating” and left her feeling “very uneasy”.

She is being assessed for personal independence payment (PIP), the extra costs benefit introduced by the Tory-led coalition in 2013 and gradually rolled out to long-term working-age claimants of disability living allowance (DLA).

She said she was being reassessed for her eligibility, like many thousands of others, despite having been awarded lifelong DLA after she was tested as a six-year-old.

But Martinez (pictured, centre) said the PIP assessment process had been an insight into the “culture of blame” that has developed under nearly a decade of Conservative-led governments.

She said: “Going through the process has been incredibly humiliating [and] frustrating.

“Because I have been disabled all my life, I can honestly say that I really struggle with the notion of needing help.

“This current culture is humiliating because it makes people feel guilty for needing support.

“During my PIP assessment, when I had to list all the things I couldn’t do, it just reminded me of all the battles my teenage self had fought to be proud of myself, to love myself, to feel worthy despite needing help, and I won those battles but they took a lot of work.”

She said disabled people now lived in a society that was not only attacking their basic human rights but also “attacking and eroding our psychological wellbeing because they are making us feel that we don’t deserve or merit help”.

And she said that the government’s benefit reforms, despite being intended to cut spending, were making disabled people “less independent and more dependent on state help” and were costing tax-payers billions of pounds.

Martinez told the rally: “If these cuts and reforms are not about saving money, what are they about?

“Quite frankly, if the government doesn’t help sick or disabled people, they don’t have to help anybody.

“I think their aim is to turn us into a society like America, where American citizens do not have any expectation of any help; it’s a dog-eat-dog culture out there.

“Instead of being proud of being one of the world’s leaders in disability rights, we are following America, we are eroding all our hard-won rights.

“Instead of being proud of that and really nurturing that and protecting that, we are throwing that away and we are going backwards.

“I can honestly say support in many ways was better when I was a kid than now. That is not the way things should be.”

Martinez also told the rally that she was “astounded” that so few people knew the reality of the impact of austerity on disabled people, an issue the media had “largely ignored”.

She said: “One of the primary things we have to do is to start letting people know what’s happening in their country, in a supposedly civilised country.”

Another leading disabled activist, Kirsten Hearn, a Labour cabinet member on Haringey council, said everybody at the rally probably knew someone who had died “as a result of our cruel benefit system, as a result of not getting the right support”.

She said: “They make us leap through more and more difficult hoops, it becomes more and more entangled, we have to become more and more dexterous in the way that we argue against bureaucracy… as we fight to retain the DLA and PIP and independent living, and care packages, as we struggle to pay the rent or to keep a job, or to decide whether to eat or heat.”