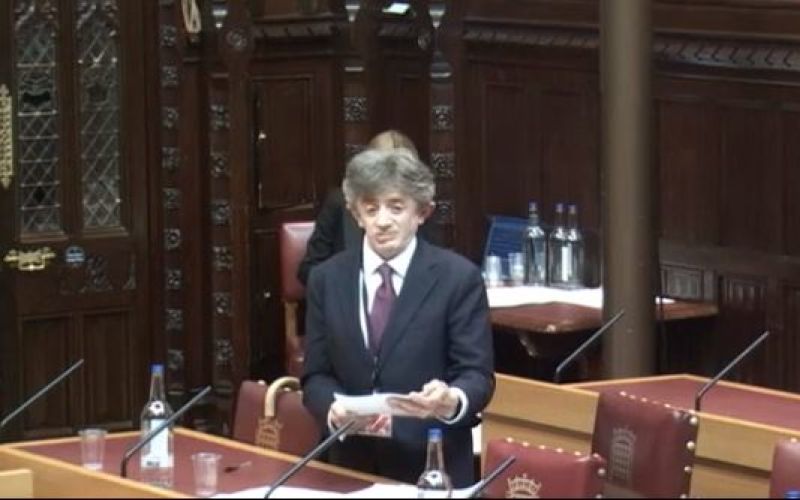 The equality watchdog is failing disabled people by attempting to “mainstream” disability and treat it the same way as the other eight characteristics protected by the Equality Act, peers have warned.

The House of Lords was debating the Equality and Human Rights Commission’s decision that it no longer needed a disability commissioner, and to scrap its statutory disability committee and replace it with a new disability advisory committee.

The debate was secured by the disabled Tory peer Lord [Kevin] Shinkwin, who quit the commission in December over what he saw as the collusion of former women and equalities minister Justine Greening with EHRC’s decision to scrap the disability commissioner role.

Lord Shinkwin (pictured) had refused to attend EHRC board meetings after his appointment in protest at the decision to appoint him as a general commissioner instead of the disability commissioner role he had applied for.

He told fellow peers that disabled people were “nowhere near attaining equality” with members of other protected characteristics.

He said; “The goal of equality might be the same, but the nature and extent of the disadvantage that goes with disability are so different that while mainstreaming disability might sound laudable in theory, in practice it means that disability, as the heaviest stone, falls to the bottom of the inequality pond.”

He said this was why EHRC needed the “sharp focus on disability issues” provided by a disability commissioner.

And he criticised the government for failing to speak out about Greening’s involvement in abolishing the role.

He said: “Of course, I think there is a strong case for a disability commissioner, otherwise I would not have applied for the position.

“But now it has been abolished, the case that the government need to make is why disabled people should trust them when they cannot even bring themselves to express regret for the involvement of a former minister in the abolition of disabled people’s last powerful voice.”

The disabled Liberal Democrat peer, Baroness [Celia] Thomas, said that if disabled people were asked if they would prefer a statutory disability committee chaired by a disabled commissioner or just an advisory committee and all the EHRC commissioners having a duty to oversee the disability agenda, she was “pretty sure they would go for the former”.

She said: “The reason is simple: as we have heard, so much of life, public and private, is denied to disabled people even now and there are still so many battles to be fought… they would want the strongest voice possible to get things changed.”

She added: “We need somebody shouting the odds from the rooftops on our behalf.

“Disabled people want a body that will not rest until it has brought about real change – not a body that has all the right words but not enough action.”

Baroness Deech, the crossbench peer who chaired a Lords committee that investigated the impact of the Equality Act 2010 on disabled people, said that it was “not enough to treat disabled people equally with everyone else” and that “mainstreaming” disability “has not worked, so far”.

She said: “There are situations where, to get to a level playing field, disabled people need favourable treatment, a concept with which employers struggle.

“Witnesses to our committee thought that the inclusion of disability within the EHRC had diluted the focus on disability that had existed and had given rise to a sense of a loss of rights by disabled people.”

She said her committee’s report recommended that EHRC’s disability committee “should be re-established as a decision-making body with ring-fenced resources”.

She said that disabled people wanted “a champion, not to be just one of nine protected characteristic groups, and that call has not been answered”.

Another disabled peer, the Liberal Democrat Lord Addington, asked if there was any evidence that the commission’s new approach was working better.

He said: “I ask because that approach is not one that is reassuring to the huge and diverse disability communities.”

Baroness Gale, Labour’s shadow spokeswoman on women and equalities, said she was “not so sure” that a case could be made for a separate disability commissioner, as it could lead to calls for a separate commissioner for the other eight protected characteristics.

She said the commission’s briefing for the debate said that “it believes that the changes it has made were designed to strengthen, rather than weaken, its approach to advancing the rights of people with disabilities”.

Baroness Williams, a Home Office minister, said the commission recognises the “particular rights and protections for disabled people” under the Equality Act through its new disability advisory committee.

And she said the disability commissioner role was “not a statutory post but simply an EHRC-created role: a set of responsibilities connected to the former disability committee that the commission decided to change as part of its overhaul ​of its disability arrangements”.

She said her understanding was that Lord Shinkwin had been appointed “as a commissioner, not specifically as a disability commissioner” and she said that “any decision to give EHRC commissioners specific roles and responsibilities is a direct matter for the EHRC”.

She added: “I assure him that the new EHRC arrangements work better for disabled people than the old ones.”

Baroness Williams said EHRC believed that its previous approach treated work on disability “separately from other work programmes”, led to “work on disability being seen as the responsibility of specific individuals in the commission rather than the collective ​responsibility of the board and the organisation as a whole”, and “led to some miscommunication as well as missed opportunities”.