You are here: Home / Benefits and Poverty / ‘Fitness for work test and sanctions helped kill my brother’ 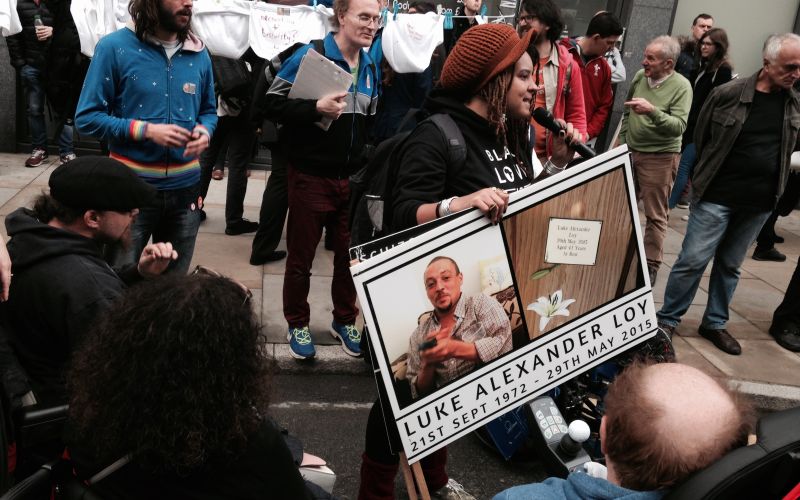 The sister of a disabled man who died just three months after being found fit for work and then having his benefits sanctioned says the government’s discredited work capability assessment (WCA) system was partly responsible for her brother’s death.

Luke Alexander Loy, who had schizophrenia and lived in Birmingham was just 42 when he died in May this year.

He had been claiming incapacity benefit (IB) for more than 20 years, but was found fit for work following a WCA, despite his doctor explaining that he was not currently well enough to work.

He was apparently sanctioned by the Department for Work and Pensions (DWP) for failing to attend meetings at Jobcentre Plus and not actively looking for work, and fell further and further into debt.

After his father discovered what had happened, he helped his son to appeal and eventually – just before he died – DWP reinstated his benefits.

But his family believe that by then the damage to his health and wellbeing had been done.

On 29 May, after his family had become concerned about his welfare when he failed to respond to their calls, police officers broke into his house and found him dead on his bedroom floor. A subsequent inquest reached an open verdict.

The case has emerged less than a month after Disability News Service revealed how a coroner had written to DWP to demand changes to the WCA system, after concluding that the decision to find a London man, Michael O’Sullivan, fit for work was the trigger for his suicide.

But they are only the latest in a series of shocking cases which have exposed the harm caused by the WCA, the eligibility test for the out-of-work disability benefit employment and support allowance.

Loy’s sister, Natalie Jeffers (pictured), joined disabled activists from Disabled People Against Cuts in a protest outside the Conservative party conference this week in an effort to “raise awareness of the human costs of these policies” and to hold work and pensions secretary Iain Duncan Smith “accountable” for his actions.

She told fellow protesters: “He died as a result of Tory cuts. Shame on the Tory party for what they are doing to innocent people who need the support of the state.”

She told DNS later that her brother had become withdrawn and scared as a result of being found fit for work and then being sanctioned.

Until he lost his IB, she said, he had been in a “very good rhythm”, taking five walks a day, working on art projects at home as therapy, and shopping for his elderly neighbour.

Jeffers said: “My brother was loved by the community. He was fine and doing really well.

“He had his own rhythm, but it was completely disrupted by being found fit for work and then sanctioned, because it made him feel worthless and insecure.”

She said: “My family have paid taxes for generations and my brother’s situation could have happened to any family.

“To make the public think that all people seeking benefits are ‘scroungers’ is a misrepresentation of the hard-working-class families that, through no fault of their own, may need additional financial support from the state from time to time.

“It is a beautiful core value of British society that these systems were set up to assist those needing help when times get tough.”

Loy had been a carer for his mother until three years ago, when she died from cancer, and he was subsequently hit with the bedroom tax because he had been living alone in a two-bedroom council house after her death.

Jeffers said: “All these things started to change his personality and energy. He died in debt. He owed the government money, he owed the council money.”

She believes that the government’s decision to plunge her brother suddenly into the jobs market, without offering support as he transitioned from one system to another, was “a really destructive way of dealing with someone who was mentally ill”.

She said: “We can’t prove the cause of my brother’s death, but we know that the only seismic shift in his life that shocked his stability and impacted a decline in his mental health was this WCA decision. We believe this was a contributing factor.”

Jeffers believes that the impact of being found fit for work was worsened by the lack of government support to cope with the bureaucracy around its welfare-to-work regime and the fallout people face from losing vital benefits and being sanctioned.

She said: “There needs to be a government strategy to create a supportive culture for people like my brother, which is shared by local authorities and primary care providers.”

She said her brother’s health was further worsened by the “vitriol” targeted at disabled people by politicians and the media, frequently accusing them of being partly responsible for the country’s economic problems.

And Jeffers said she was appalled by the “vicious” and “despicable” conference speech given this week by work and pensions secretary Iain Duncan Smith, which she said appeared to be aimed at tarring disabled people as “scroungers”.

She pointed to his call for disabled people to “work your way out of poverty”, something her brother was not able to do, as a “deeply irresponsible simplification of such a complex issue”.

Despite the daily briefings ministers must receive on the impact of their reforms, she said, they still appear to fail to understand the “nuance” of how disabled people in poverty live on a day-to-day basis.

She said: “Rather than admitting that the government have got these policy changes to the benefits system wrong, the Conservative rhetoric is getting even more vicious and divisive.

“Instead of creating compassion, they are creating a culture of fear and pointing the finger of blame at the most vulnerable people in our society. Shame on them”.

A DWP spokeswoman said: “Our sympathies are with [the family], but it is wrong to suggest a link between a benefit decision and someone’s death.

“The work capability assessment is designed to look at what someone can do with the right support – rather than just writing people off on sickness benefits as happened in the past.

“It is important that people supply sufficient evidence – including medical evidence – when making a claim, as it could affect their benefit entitlement.”