You are here: Home / Politics / General Election 2017: Disabled actor says national party role has given her a voice 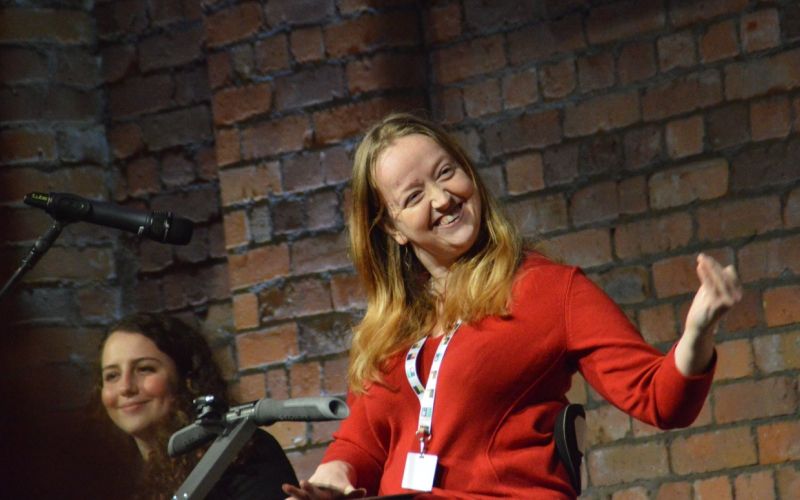 A critically-praised disabled writer and performer says her election as a national spokesperson for the Women’s Equality Party has allowed her to feel “equal” for the first time in her life.

Athena Stevens is one of six national spokespeople elected by Women’s Equality Party members at its conference last November, and is speaking for the party on equality in the media during the general election campaign.

The party, which was formed less than two years ago, is fighting seven seats at the general election, and says its aims are both “winning, and changing the conversation”.

It is even asking other political parties to steal its policy ideas, and to use them in their own campaigns.

The party’s top target for next month’s general election is the Shipley seat currently held by Tory Philip Davies, the “anti-feminist” who, as well as attempting to block bills aimed at promoting women’s rights, has called for disabled people to be able to work for less than the minimum wage. He will face the party’s leader, Sophie Walker.

Stevens (pictured), who is artistic director of a production company, was a founding member of the party, and has been working with the candidates for the general election, helping them connect with their disabled constituents “who might otherwise be forgotten by other parties”.

She said this had “really enabled me to have a political voice in the country”, something that she says few other disabled women enjoy.

She says this was underlined by her ongoing battle with London City Airport over the damage caused to her electric wheelchair when she tried to take a flight to Glasgow.

“It really hit me hard this autumn, just how the political voice of the disabled population is silenced and ignored in this country,” she said. “It really made me extremely depressed and I was suicidal because of it.

“I think everyone is feeling disenfranchised but I think the disabled population has it the worst.

“If a large company can destroy my wheelchair and not do anything about it… I can write all the novels in the world, that doesn’t change the reality for us, and a lot of people are depressed and angry because they don’t have a voice in Britain today.”

Being part of the Women’s Equality Party, she says, “has been something that has enabled me to give a voice to disabled people and also to be an equal in our society in a way that nothing else has, not even my work”.

She added: “To be part of a movement that actively seeks out my voice and puts it in the media is awesome.”

She is thinking of standing herself at the next general election, and says if she does it will be thanks to the “groundwork” the party is laying down now.

“This is a party more than anything else that seeks to tell real stories about disabled people and get their voices out there, influencing the public more than any other party.”

Asked about the policies of the Tory government, she says: “I think the UN is absolutely right in that we are seeing a complete attack on disability services and lack of infrastructure to help disabled people.

“This slow economic genocide has to stop because the fact is that the quickest-growing population in the UK is looking at retirement.

“We need to figure out how to help older people, how to help disabled people, because we can’t just let them die on the street.”

She also wants to see tougher measures taken to ensure that the media finally fulfils its promises to employ more disabled people; harsher punishment for abuse by care workers; and more of an effort “to see the economic potential of the disabled person”.

While she is angry at the flawed benefits assessment processes that find sick and disabled people fit for work when they are not, she is also frustrated that people with impairments like hers – she has cerebral palsy – are often seen as “unfit to work”.

She said: “I think the fact that Stephen Hawking and myself would be found unfit for work is as problematic as people who are being judged fit for work and can’t.”

Like many other disabled people, she looks at the assessment process for personal independence payment – she is only applying for it now as she was born and lived previously in the US and has only recently qualified to claim UK benefits – and is frustrated at how inaccessible and inefficient it is.

She says the party’s “progressive” policies on disability are partly explained by the fact that Walker has a disabled daughter.

Stevens said: “To have a woman who is the mother of a child with autism running a political party is awesome and that is something we need to be making disabled voters aware of.”

The party will focus a lot on the need to address the impact of Brexit, and it believes that the best way of doing that is to invest in “the caring economy”, with more money for social care for both older and disabled people, childcare and education, said Stevens.

In its manifesto, it will also highlight the harm caused by the media portrayal of disabled women as asexual, a stance that Stevens believes is “revolutionary for a political party”.