You are here: Home / Independent Living / Government fails to back bill that could open up access to 800,000 wheelchair-users 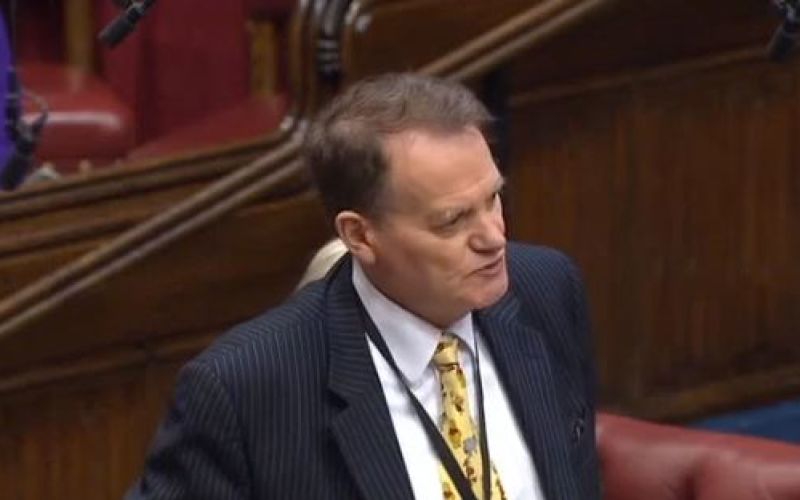 A disabled Tory peer has attacked the government for failing to support new laws that would provide access for 800,000 fellow wheelchair-users to 60,000 shops, pubs and cafés across England, Scotland and Wales.

His bill, identical to one rejected by the coalition government three years ago, would force owners of public buildings to replace all steps of up to six inches – and later, those up to 12 inches – at their entrance with a ramp suitable for wheelchairs.

But despite widespread backing for the bill from other peers, Home Office minister Baroness Williams made it clear that the government did not back the bill and that the “deliberately and carefully worded” Equality Act provided sufficient protection for disabled people.

He said that the report from the House of Lords’ Equality Act 2010 and disability committee last year found “severe difficulties with the ‘reasonable adjustments’ provision of the act, in that no one was enforcing it and disabled people had to take cases to court themselves in order to get access improvements”.

He said research by the Department for Work and Pensions and DisabledGo three years ago found that 20 per cent of the 30,000 shops and restaurants they visited did not have wheelchair access.

He said: “If you extrapolate that 20 per cent of 30,000 shops to the total of 355,000 public retail premises, you get a figure of 71,000 shops, pubs and cafés which wheelchair-users simply cannot access. That is a scandalous number in this day and age.”

Lord Blencathra said his bill would provide access to about 60,000 of those buildings.

He said the committee’s inquiry had shown that the duty to make reasonable adjustments under the Equality Act was “simply not happening”.

He told fellow peers: “Disabled people are told by the government that if they cannot be served they should just take their business elsewhere.

“Would they say that to a black person, a gay person or anyone else in the protected categories? I hope to God that they would not.”

Lord [Colin] Low, the disabled crossbench peer, said that “the removal of steps and the provision of ramps should have been fully implemented and complied with as long ago as 2003”, under the Disability Discrimination Act (DDA), and so “the real issue is with enforcement”.

And he said the government already had the power to introduce regulations under the Equality Act that would “take us a significant step closer to getting service-providers’ compliance with their duties under the act”.

Another disabled crossbench peer, Baroness Masham, said the bill “not only would help thousands of wheelchair users, but their helpers and people using babies’ pushchairs”.

She said that the only pharmacist in her home town of Masham in north Yorkshire “has a four-inch step and no ramp.

“This pharmacist just cannot be bothered or thinks that there is no legal requirement.”

She added: “How much more does the noble Lord have to do to convince the government that his bill is necessary? This is something that will not cost the government money.”

He said: “When you experience denial of access and discrimination, you do not experience it in a cerebral state, you feel it. You feel it in your heart and in your guts.

“It is to be denied fairness, with no dignity, no respect and no equality, just exclusion.

“That is the beauty of my noble friend’s bill. It is not actually anything to do with steps, it is simply to do with inclusion.”

Another disabled Conservative peer, Lord Shinkwin, said the bill was “pragmatic, principled and practical”, and gave the government the chance to “demonstrate their commitment to disability equality and to keeping the flame of our party’s landmark disability rights legislation, the DDA, alive”.

He added: “Having served on the National Disability Council, set up to advise the government on the implementation of the DDA more than 20 years ago, I am more sorry than I can say that your Lordships’ house is still debating such a modest bill.”

Baroness [Sal] Brinton, the disabled president of the Liberal Democrats, described how she was visiting family in Barnes and East Sheen in south-west London recently and had to visit a pharmacy.

She said: “The first three local pharmacies that I came to all had steps. None had a bell and one had an enormous sign in the front window saying, ‘Disabled? We’re here to help’. How could I tell them?”

Another disabled Liberal Democrat peer, Baroness [Celia] Thomas, said: “As has been said by nearly every speaker, what is simply not recognised in general is that there is no person or body actually and actively in charge of policing access to public buildings, such as shops.

Baroness Deech, who chaired the Equality Act 2010 and disability committee, said that access to public buildings was “a fundamental right”.

She said: “The removal of legal aid has made it even harder and more costly for individuals to challenge the blockages to their rights. The burden is on them alone, for class and proxy actions are not allowed.

“The bill is the tiniest step in the right direction.”

She added: “Support for this bill is essential to stop the callous or ignorant denial of an easy remedy of accessibility for all of us.

“Any government who care for minorities or those who are not just about managing must bring it into law.”

Baroness Gale, Labour’s shadow spokeswoman on women and equalities, said her party backed the bill, which she said “offers a solution that will make life better and easier for people in wheelchairs”.

She said: “It seems that in this country today it is okay to effectively bar around 800,000 people in wheelchairs from being able to enter many places we take for granted such as shops, pubs and restaurants.”

But Baroness Williams, for the government, said the duty to make reasonable adjustments was “now enshrined in the Equality Act and remains a cornerstone of the protection offered to disabled people” and “achieves the delicate balance of taking account of the rights of disabled people and what is reasonable to expect of those under a duty to make an adjustment”.

She said the law “recognises the need to strike a fair balance and requires a service provider only to make adjustments that are reasonable in all the circumstances of a particular case”.

And she said that Part M of the Building Regulations 2010 “also requires reasonable provision to be made for wheelchair-users to gain access to new buildings or when an existing building undergoes significant alternation or extension”.

She said these measures meant the government “believe that the existing legislation is already comprehensive in this regard”.

And she said the bill would “essentially remove the reasonableness filter and require service providers, without exception, to provide ramps for wheelchair users wherever there was a single step that was less than six inches in height in a public area”.

She said such a law would “take no account of the cost of the installation”, while, for 12-inch steps, “a ramp would need to be six metres long”.

Baroness Williams said the Equality Act was “deliberately and carefully worded to allow for greater scope in considering how best to solve the particular problem being experienced by the disabled person”, while Lord Blencathra’s bill “would inevitably result in numerous calls to have other specific remedies spelt out in the act or in further technical guidance”.

She said that his “one-size-fits-all approach cannot address the many and varied needs of our citizens”.

But Lord Blencathra said Baroness Williams had had to “defend the indefensible” and he condemned the response from the government, which “does not seem to give a damn about the 11 million disabled people in this country”.

He said: “It is obvious that the Government Equalities Office has produced the usual discredited litany of excuses for doing nothing to help disabled people.”

He said he would accept an offer from the new minister for disabled people, Sarah Newton, to hold a round-table discussion with peers on the issue, although he warned that Newton “does not make policy, which is firmly in the grip of the Government Equalities Office”.

He added: “I urge ministers to get a grip of the civil servants running this policy and to tell them that wheelchair-users have rights too.

“We do not want special treatment but, in order to get equality, we need different treatment, as the select committee pointed out.”

A date for the bill’s committee stage has not yet been announced.