You are here: Home / Human Rights / Government is failing on disabled women’s rights, UN is told 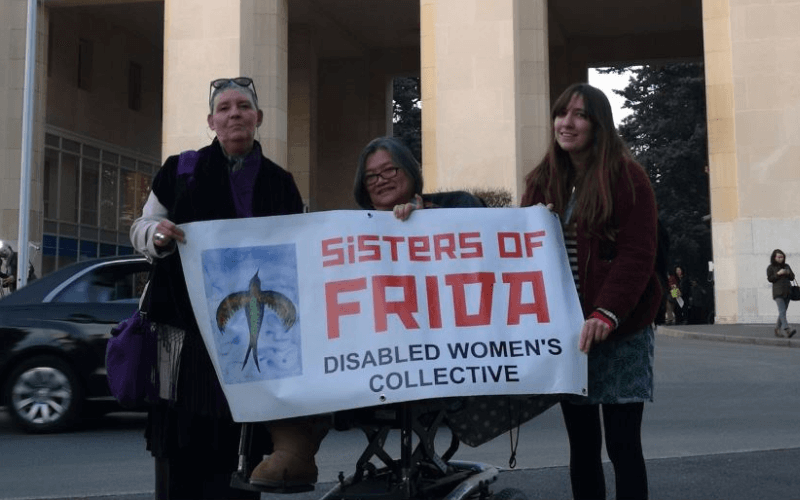 Activists have told a UN committee how the UK government is failing to address the significant barriers and human rights violations faced by disabled women in accessing social security, justice, jobs and health services.

Eleanor Lisney and Rachel O’Brien, from the disabled women’s collective Sisters of Frida, were among UK women’s rights campaigners in Geneva this week to brief a UN committee of women’s rights experts.

The committee was examining the UK on its progress in implementing the Convention on the Elimination of all Forms of Discrimination Against Women (CEDAW).

It is just the latest in a series of examinations of the UK’s record on disabled people’s rights by UN human rights bodies.

Last November, the UN’s special rapporteur on extreme poverty and human rights, Professor Philip Alston, said the UK government had inflicted “great misery” on disabled people and other marginalised groups, with ministers in a state of “denial” about the impact of their policies.

The previous year, the UN committee on the rights of persons with disabilities told the UK government to make more than 80 improvements to the ways its laws and policies affect disabled people’s human rights.

And in 2016, the same committee said the UK government was guilty of “grave and systematic violations” of three key sections of the UN Convention on the Rights of Persons with Disabilities, most of them caused by ministers at the Department for Work and Pensions.

In a briefing passed to the CEDAW committee – jointly prepared with Women Enabled International (WEI) – Sisters of Frida said research showed that about a quarter of disabled women had missed a meal in the last year because they could not afford it, while social security reforms had “disproportionately impacted” disabled women.

In 2017, more than a third of disabled women earned less than the national living wage, the briefing added.

Sisters of Frida also said that disabled women in the UK experience violence at higher rates than other women, because of both discrimination and economic disempowerment.

Disabled women also face significant barriers in accessing justice, with cases of sexual violence significantly less likely to be referred by police for prosecution if the victim is a disabled woman, while laws and policies addressing violence against women “routinely fail to include disabled women”.

Sisters of Frida – which received funding from the Equality and Human Rights Commission (EHRC) to attend the examination of the UK government in Geneva – also warned the committee that disabled women faced increased barriers to accessing healthcare, particularly maternal health services.

The committee was told that disabled women report “significant barriers” in accessing “continuity of care during the prenatal period, a lack of control during labour and delivery, and inadequate postnatal care”.

Following the briefings by campaigners, including Lisney and O’Brien, the committee questioned UK government representatives about its implementation of CEDAW.

O’Brien, disabled students’ officer for the National Union of Students but in Geneva representing Sisters of Frida, said afterwards: “Some of the issues we raised were about welfare reform and how that relates to domestic abuse, and the lack of access to justice for disabled women in the light of legal aid cuts, especially regarding benefit tribunals.”

She said the government’s response to the committee’s questions had been “poor, especially regarding the impact of universal credit on women and disabled people”.

She said she hoped this would be reflected in the committee’s report.

EHRC had also submitted a report to the CEDAW committee, with recommendations for the UK and Welsh governments.

It raised concerns about mental health services in prisons; the possibility of the government’s community sentence pilot leading to compulsory treatment for women with mental health conditions; and access to healthcare for disabled asylum-seekers.

It said 32 women have died after a restraint episode over the last five years after being detained under the Mental Health Act.

EHRC also called on the UK government to implement section 106 of the Equality Act, which would force political parties to publish data showing how many of their parliamentary candidates are disabled people.

It also wants there to be work with political parties and other organisations “to improve the reliability of support available to disabled women candidates, and legislation to exempt costs arising from disabled candidates’ impairments from statutory limits on campaign expenditure”.

In her opening statement to the CEDAW committee, the head of the UK delegation, Elysia McCaffrey, the deputy head of the Government Equalities Office, stressed the UK’s commitment to “advancing gender equality” and said the UK government planned to use the power of #MeToo and other campaigns to “strengthen” its compliance with the convention.

She said the government’s strategy on gender equality and economic empowerment, which will be published this spring, would “seek to do more for low paid and financially fragile women, and women facing multiple barriers or with complex needs”.

But she mentioned disabled women only once in her speech of more than 3,700 words, and that related to workplace equality funding introduced by the Scottish government.

Picture by James Austin: Lisney (centre) and O’Brien (right) in Geneva with Vivienne Hayes from the Women’s Resource Centre