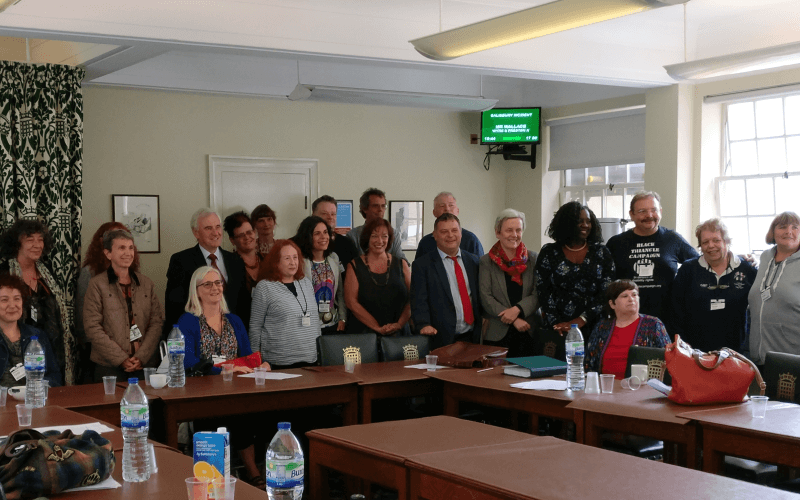 Many of the disabled activists who have played a key role in exposing the harm caused by the government’s social security cuts and reforms have come together for a “breakthrough” campaign meeting attended by five Labour shadow ministers.

Labour’s shadow chancellor John McDonnell, who chaired the meeting, said afterwards that he believed that it could herald the start of “a significant movement to expose the brutality of the system” and secure “permanent change”.

The meeting was welcomed by disabled activists who attended, but some of them also warned Labour that they now needed to see “concrete action”, with two saying separately that “the proof of the pudding will be in the eating”.

The meeting focused on the deaths and other serious harm caused by the much-criticised work capability assessment (WCA), but it also covered many other areas of concern, particularly the damage caused to disabled people by the government’s new universal credit.

The meeting is set to be the launchpad for a new series of campaigning efforts linking the party with disabled activists and allies, with Labour hoping eventually to secure support from members of other political parties.

A follow-up meeting is set to take place later this autumn.

It is believed to be the first time that representatives of so many of the disabled-led grassroots organisations who have campaigned against cuts and reforms – in many cases since 2010 – together with researchers, journalists and union representatives, have gathered together in the same room* to discuss the concerns and plan a campaigning response.

The key theme of the meeting was the importance of campaigning around the links between the WCA and the deaths and other serious harm caused to claimants.

This included the repeated failure of the Department for Work and Pensions (DWP) to ensure that the “further medical evidence” needed to demonstrate benefit eligibility is always collected, particularly for claimants with mental health conditions.

Another theme was the need to hold Conservative politicians such as Iain Duncan Smith and Chris Grayling to account for the decisions they made within DWP in 2010 that many believe led to the deaths of claimants of out-of-work disability benefits.

But those present also said that it was vital to “look at the bigger picture”, and they brought in other crucial issues such as the introduction of universal credit and personal independence payment, the benefit sanctions and conditionality regimes, the impact of the reforms on disabled women, and the cuts to social care support.

One contributor said: “People are having their lives utterly destroyed today.”

One disabled activist told the meeting that there was a need both for “harm reduction”, to address the immediate problems with the assessment process, and “system change” to secure the eventual abolition of the WCA altogether.

He said: “Saying ‘change the WCA right now’ is not saying ‘keep the WCA’, it is saying ‘stop it killing so many people’.”

Other contributors said the government had made a deliberate attempt to create a “hostile environment for disabled people”.

One activist who had provided unpaid advocacy for other disabled people said they and colleagues had been “inundated with people terrified of the introduction of universal credit”.

People were realising that they could not move out of their local authority area in case they were forced to move onto the government’s new working-age benefit ssytem, they said.

The meeting heard from one attendee about the importance of putting the government’s reforms into historical perspective and highlighting how they had been strongly influenced by the US insurance industry, which had wanted all disabled people seeking benefits “to be treated as bogus claimants”.

She added: “The WCA was brought in to destroy public confidence in the welfare state.”

There was also a call for nurses and GPs to be held to account for the way they had “compromised” their own medical ethics in dealing with requests for evidence to support disability benefit claims and in acting as assessors for private contractors.

And there was concern at the continuing roll-out of the Improving Access to Psychological Therapies (IAPT) programme, which was leading mental health professionals to “come out with the sort of language we are hearing from the Department for Work and Pensions”.

The idea for a meeting of politicians, activists and researchers had originally come from Black Triangle’s John McArdle, who had put the idea to McDonnell.

McDonnell told Disability News Service (DNS) after the meeting: “I think this is a breakthrough meeting in terms of getting many of the relevant organisations and individuals together who have their concerns about what is happening to disabled people and their treatment in the welfare system.

“I think it is the start of what could be a significant movement to expose the brutality of the system, but more importantly to secure permanent change.”

“I am encouraged that we are going to be having another meeting in the next six weeks and that a strategy will be formulated to really take the fight for disability rights to the heart of Westminster politics.

“But the proof of the pudding is in the eating. We want some concrete action.”

Marsha de Cordova, the shadow minister for disabled people, told DNS that it was the first time that the various groups had been brought around the same table to talk about different issues – including crucial concerns about the imminent “migration” from benefits such as employment and support allowance onto universal credit – that all fed into the idea that the government had created a “hostile environment towards disabled people”.

She said: “It is good that we are talking about it. It’s great that we are bringing people around the table, and mainly disabled people.”

Paula Peters, from Disabled People Against Cuts and the Mental Health Resistance Network, said the meeting had provided “ideas to go forward”.

But she echoed McArdle’s words, saying: “Actions speak louder than words. The proof of the pudding is in the eating.

“We have heard words for a long time while disabled people continue to die.”

She also said there was “a lot more work to do” on Labour’s position on universal credit, which her two groups believe needs to be “stopped and scrapped” rather than paused and fixed, as is the current Labour policy.

She said: “We still have to persuade them to stop and scrap. The system is at breaking point.”

Researcher and campaigner Catherine Hale, lead researcher and project manager of the Chronic Illness Inclusion Project, and a member of the Spartacus Network, said the meeting was “very exciting”.

She said: “In 2015 it felt like the Labour party turned its back on disabled people because the leadership thought that showing us support would work against them in the election. We all know how that ended.

“Now John McDonnell has given new momentum and hopefully new unity to our campaigns against the WCA, sanctions, PIP and universal credit.

“I hope that with Labour now standing squarely behind disabled people we can overturn the Tories’ cruel policies and vicious rhetoric that have devastated our communities.”

Researcher Mo Stewart added: “It was a very welcome meeting, demonstrating Labour’s commitment to changing the plight of claimants of disability benefit for the better.

“There is a tendency to overlook the American corporate influence behind the introduction of the fatally flawed WCA. That needs to change.

“The disabled lobby petitioned for years to stop being identified by a medical label, and so the social model was adopted.

“Along comes big business to play them at their own game, advising the DWP to disregard medical opinion in favour of the flawed biopsychosocial model, and a world of pain and persecution followed with the adoption of the WCA.

“Labour plans to stop the WCA when elected to office, which has given a lot of hope to the persecuted sick and disabled community.”

*The meeting was conducted under the Chatham House rule, so although the contributions made during the meeting can be reported, the names of those who spoke and their organisations cannot, unless they spoke afterwards on-the-record. Labour has allowed DNS to report the names of the five shadow ministers who attended

Picture: Disabled activists, Labour shadow ministers and researchers after the meeting in Westminster