You are here: Home / Activism and Campaigning / Ideas to replace WCA with new assessment framework win some support 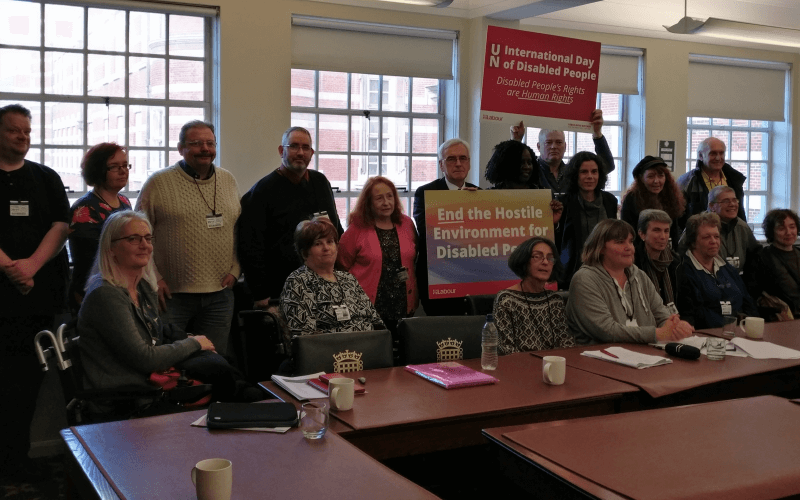 Disabled activists have delivered a generally positive response to fresh ideas on how to replace the hated fitness for work test with a new assessment framework that would restore “dignity and respect” to those unable to work full-time.

Last month’s (pictured) was the second in an ongoing series of meetings – focused on the work capability assessment (WCA) – between senior figures in the party and some of the disabled activists who have played a key role in exposing the harm caused by the government’s social security cuts and reforms.

Hale, lead researcher and project manager of the Chronic Illness Inclusion Project (CIIP), and a member of the Spartacus Network, presented some of the ideas she has been working on with fellow Spartacus and CIIP researcher Stef Benstead*.

Hale (pictured, front left) fears that if disabled people do not come up with their own model to replace the hated WCA then something will be imposed on them.

She said after the meeting: “If we have to have assessments, I’d rather we designed them and achieved a consensus among ourselves.

“Some will say to hell with assessments, or just get doctors to sign us off as not fit for work, but I think both those positions are naive.”

Any new assessment framework should have four key principles if it is to restore the human rights of disabled people, she says, in a blog subsequently posted on her website**, which was based on her presentation at the meeting.

She says such a system should overturn the ideology behind the “hostile environment” created by the government’s social security reforms and restore “dignity and respect” to disabled people; it should change the relationship between work and health; it must empower disabled people; and it should provide an “adequate and secure” baseline standard of living.

Hale says that Labour must now commit to removing the “adversarial stance running through all DWP’s assessment systems” which cast disabled people as “guilty until proven innocent”.

A Labour government would also need to work to “bring about culture change” within DWP, and “eliminate conditionality and sanctions as a punitive tool for getting disabled people into work”.

Compliance interviews, benefit fraud hotlines and “other instruments of intimidation and suspicion” must all be eliminated, she says, as must the outsourcing of assessments to private contractors.

She also calls for a new “parity of esteem” between paid work and unpaid work such as caring, volunteering, peer support, and self-care, while she says the NHS should never view whether someone is in work as an indicator of health or recovery.

The government should also bring in disabled people to develop new assessment criteria, which should test how disabled people are disadvantaged by both barriers in the labour market and their impairments, says Hale.

Reaction from disabled activists to Hale’s presentation, most of who were at the meeting, has been generally positive, although neither Greenwood or de Cordova were able to comment this week.

The WOWcampaign, which was represented at the meeting, said Hale’s presentation “was very much in line with the thinking of the WOWcampaign, especially in proposing the ending of the hostile environment (sanctions and conditionality) and stating that the purpose of any assessment must be to empower and enable disabled people”.

But a WOW spokesman added: “As stated at the roundtable, WOWcampaign’s concern is that the focus is on the ability of the disabled person seeking work and not on the structural discrimination, prejudice and exclusion that has not only continued but increased in the workplace over the terms of the last two governments.

“There is absolutely no point in disabled people going away and preparing for work if there is and will never be any appropriate work out there for them.”

Disability Labour said it was “very impressed” by Hale’s presentation.

Wayne Blackburn, co-chair of Disability Labour, who was present at the meeting, said: “We completely agree that disabled people should not be treated as guilty until proven innocent; our knowledge of our own conditions and how they affect us must be believed and respected.

“There has to be a fundamental culture change within DWP; the negative attitudes and unconscious bias must end.”

Fellow co-chair Fran Springfield, who also attended the meeting, said she supported Hale’s position that paid work was not the only route to social participation, was often not the most appropriate route for disabled people, and must never be damaging to health and wellbeing or used as an indicator of health or recovery.

Springfield said: “Bringing back DWP assessments in-house, as a Labour government will do, is so important.

“Disabled people should never be abused to provide shareholder profit.

“I believe what is absolutely vital is integrating assessments of care and support needs into the assessment of work capability.

“Supporting us with independent living would make a huge difference to those of us who are able to work or volunteer.”

And she said that providing a secure baseline income was “an essential element of our human rights”, as was “understanding and accepting that some people will never be well enough or able to volunteer or work”.

She and Blackburn said Disability Labour was working on how such ideas could be implemented and “look forward to being able to integrate that into the work that John McDonnell’s team is already doing”.

Gail Ward, from Black Triangle, said Hale and Benstead had “put forward good arguments for replacement of the WCA”, although she said that Black Triangle had “grave reservations” about Benstead’s suggestion that occupational therapists should be closely involved in a new assessment process.

He said that any incoming government would “have to go at least as far as the Scottish government and consult with disabled people themselves and not those who purport to represent them”.

He added: “Paramount in that exercise would be to engage and consult widely with individual disabled people themselves in a sincere effort to discover what would constitute a new social security system worthy of calling itself one which places dignity and respect at the very heart of the system, while complying with the UN Convention on the Rights of Persons with Disabilities.”

Rick Burgess, of Manchester Disabled People Against Cuts (DPAC), Greater Manchester Coalition of Disabled People (GMCDP) and Recovery in the Bin, said it was “very early days” and the ideas should be seen as “exploring possibilities” rather than drafting plans for a new assessment process.

He also stressed that there should be legislation to address the barriers faced by disabled people in the labour market, rather than attempting to address the discrimination they faced solely through social security reforms.

He also said the ideological push to see work as a “cure” must not act as an excuse to reduce income or support provided by social security or the social care system.

He said: “Catherine and Stef’s work is helpful to add to the all the ideas and ways of thinking we have to engage in.

“Overall, what I think is important is that Labour/a new government draws up social security reform in co-production with disabled people and service users primarily and not allow corporations, charities or the medical establishment to lead it.”

Burgess said he believed disabled people should not look to replace only the WCA and benefits such as personal independence payment, but instead “replace the entire relationship between the state and disabled people which has been a hostile one for so long”.

Bob Ellard, a member of the DPAC national steering group, was more critical.

He said he did not agree with the principles of Hale’s paper because the ideas centred on the link between social security and work inequality, “and that link needs to be broken”.

He said that a fair incapacity benefit system would have to remove that link and be based purely on need, with the government then tackling issues such as “workplace discrimination, access to transport, education and training and other issues that are barriers to disabled people gaining good quality work”.

But he added: “In terms of short-term measures that Labour could take pending a redesign of social security there are some good things in there, but I don’t view it as a model for a long-term replacement.”

**Comments on the ideas can be posted on her website